"Call them “red,” though they were not red. To a casual observer, they looked identical. But to the “blacks,” through touch and smell and morphic fields, they were anathema. Strangers, aliens. Freaks that had to be destroyed."
―Aliens: Genocide

The Red Xenomorphs, nicknamed the Democrats[1] and Changelings[2], were a faction of rebel Xenomorphs. They were genetic variant, possibly "red" eggs, that managed to escape their native hive after the death of it's Queen instead of being destroyed. Producing a Queen Mother of their own, they established themselves far away, and began to propogate, sensing an eventual war with the original strain.

After the previous ruler of the Xenomorph Prime had been kidnapped off of the planet by Marines and therefore unable to monitor and maintain the genetics of the brood she left behind, some of the remaining aliens began to genetically deviate from the bulk of the hive. Although a new Queen Mother developed in short order, the devastation and disorganization from the Marines provided the prime opportunity for a Red Queen Mother to spawn and then flee with her minions. She established a new hive far from the old hive and co-existed peacefully within it for a few years. However, being aware of one another, both hives knew that the other was the enemy and the peace was not to last. Thus, both began breeding warriors in preparation for the war to come.

The war eventually occurs and several earth agents interested in gathering Royal Jelly from the "black" Xenomorphs used the conflict to their advantage. The Red Xenomorphs also produced royal jelly, but the Dr. Begalli and his team were not interested in "mutant jelly", so they concocted a plan to kill the Red Queen mother in order to eliminate her and leave the "black" Xenomorphs open to attack, as they would take advantage of and eliminate the Red Xenomorphs while in a weakened state.

"The queen mother and the queens were dead now, and all their eggs. They’d never come scratching on their door again."
―Kozlowksi recounts the death of the Reds (from Aliens: Genocide)

The Red Xenomorphs were ultimately destroyed after the Red Queen Mother was obliterated by an expedition team led by Daniel Grant with the help of nuclear weapons, which was done in order to help their rivals win the war as part of a plan to get royal jelly from the others. 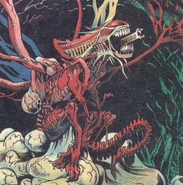 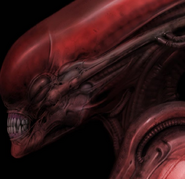 NECA figure of a Red Xenomorph. 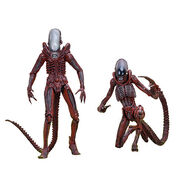 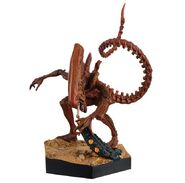 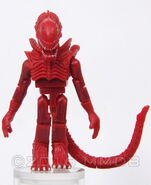