"I'm gonna break out the weapons."
―Dallas, regarding the RXF-M5 EVA Pistol (from Alien)

Weyland-Yutani Corporation[1]
USCSS Nostromo crew[2]
The Rexim RXF-M5 EVA Pistol[3] was a type of laser pistol[4] issued by Weyland-Yutani to crews of its commercial fleet.[1] Several such pistols were notably used by the crew of the USCSS Nostromo.[2] Derived from the technology used in laser welders,[4] the laser pistol was equipped with a 4x20 scope.[2]

RXF-M5 Pistols were used by the crew of the Nostromo while investigating the derelict ship on LV-426.[2] All of the Nostromo's laser pistols were presumably destroyed when the ship's self destruct system detonated.[5]

The RXF-M5 was essentially a miniaturized, weaponized version of commercial laser welders that were in use in the early 2100s.[1] These welders were first weaponized by J'Har rebels during the uprising on Torin Prime; after the cessation of the conflict, the modifications were studied by Weyland-Yutani, who developed from them a personal defense pistol for its commercial freighter crews.[1] The RXF-M5 was equipped a 4x20 scope mounted on top of the weapon and an unknown device (possibly a laser guide)[6] on the bottom. The pistol also had "NOSTROMO" and "LIGHT SYNC. DIAL" on the side in the right font Futura Demibold.[7] Presumably, if the pistol were used on another ship, "NOSTROMO" would be replaced with the ship's name.

Some MK 50 Compression Suits in 2122 featured a holster for the laser pistol on their right leg.

When the crew of USCSS Nostromo was readying to explore the surface of LV-426 in 2122 after receiving a mysterious distress call, the pistols were mentioned by Arthur Dallas when he suggested preparing weapons for the crew members that were going to explore the surface. Dallas, Thomas Kane and Joan Lambert carried the laser pistols in a holster on the legs of their MK 50 Compression Suits. However, the crew never used the weapons and they remained holstered as the crew explored the surface, the derelict ship and when the crew returned to the Nostromo.

After the crew returned to the Nostromo, the RXF-M5 EVA Pistols were placed on the table in the Nostromo's mess hall and were there when Ash attempted to kill Ellen Ripley and when Ash's head was reactivated on the same table. All pistols aboard the Nostromo were presumably destroyed when the ship's self destruct system detonated.

In the Alien Director's Cut, Kane unholsters his RXF-M5 EVA Pistol when approaching the Egg inside the derelict.[2]

In the original ending of Alien, Ripley was to find herself hanging outside of the shuttle Narcissus by a cable, with the Alien clinging to the end. Before climbing back aboard she was to shoot the Alien in the head with one of the laser pistols, only for it to have almost no effect on the creature.[8] Storyboards were created for the sequence, but it was later simplified to the version seen on film.

The pistols were designed by Roger Christian.[9] As he had previously done for Star Wars, he based the design on an existing real-world firearm for ease of construction;[9] in this case, the full-size props were based on the Rexim-Favor sub-machine gun. The weapons had their barrels shortened, their stocks and magazines removed, 4x20 scopes added to the top and a Single Point Scope (which was also used on blaster props in the Star Wars films) attached to the bottom of the magazine wells.[10] The weapon handled by Kane additional had the words "NOSTROMO" and "LIGHT SYNC. DIAL" in the font Futura Demibold added to the side of the pistol.[7]

A second, smaller version of the pistol was also custom-made, based on a Webley Junior Mk.II air pistol[11] by Webley & Scott. These props consist of a commercial Webley metal air gun with various production modifications, additional dressing including a metal tube with threaded plug in the gun barrel, an added arm and a sight-scope accessory on top, etc.[6] The miniaturized versions were used by the children who played Dallas, Kane and Lambert in some long shots where the pistols were seen in the holsters on the suits' legs, and was scaled down to match their smaller suits.[11] Three of the Webley props were constructed.[12]

The "Your Props" Webley pistol, or the "NOSTROMO kids gun" as it is known on the prop's page at at yourprops.com, is one of the laser pistol props based on a Webley Junior Mk.II. There is still some of the white lettering that used to say "NOSTROMO" visible on the side of the weapon today.[12]

The "Profiles in History" Webley pistol, or the "SCREEN-USED NOSTROMO GUN FROM ALIEN" as it is known in the catalog to the Profiles in History Hollywood Auction 56,[13] is another prop based on the Webley. This prop exhibits some production distress and age, but is overall in very good condition (as of November 2, 2013).[6] The prop was in the Profiles in History Hollywood Auction 56 where it was item 613. It was predicted that the prop would sell for $8,000 to $12,000,[13] However, the prop was not sold during the auction and the prop is not mentioned on the Prices Realized page.[14] The prop was later included in the ScreenUsed Fall 2013 Auction located in 4750-G Almaden Expy #364, San Jose, California, 95118, United States[6] where it was item 27.[15] Once again, the prop did not sell and had a starting price of $3,000.[6] This prop is distinguishable from the "Your Props" pistol as the welding marks from where the scope was attached to the pistol are different on both and the scratches, dents and other small damage marks are also different on both.

Kane armed with an RXF-M5 while inspecting an Egg. 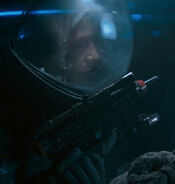 Ditto. Note that this image has been lightened for detail.

An RXF-M5 EVA Pistol behind Ash's reactivated head. Also note the tracking devices on the table.
Add a photo to this gallery

The Nostromo crew. Parker (who never actually uses the weapon in the film) and Dallas are holding RXF-M5 pistols.

Ripley (who like Parker never uses the weapon in the final film, but was going to in a scrapped ending to Alien) carrying Jones and armed with a laser pistol.
Add a photo to this gallery

The laser pistol prop based on the Webley Junior Mk.II. 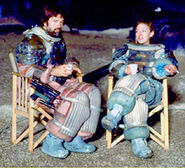 Dallas with his laser pistol holstered in a behind the scenes photo.

A laser pistol on the table inside the Nostromo.

The pistol in The Book of Alien. 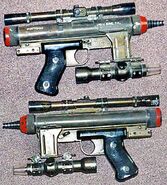 The prop in Bob Burns' collection.[16]

The pistol prop in Bob's collection.[17]

A laser pistol prop from the film.[18]
Add a photo to this gallery

The Hot Toys Dallas figure armed with a laser pistol.

The Kubrick Ripley figure with a laser pistol. 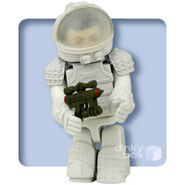 Ripley with the laser pistol in the film's original ending. Note that design seen here is very different from what was seen in the final film.

Ripley firing the pistol.
Add a photo to this gallery

Retrieved from "https://avp.fandom.com/wiki/RXF-M5_EVA_Pistol?oldid=246854"
Community content is available under CC-BY-SA unless otherwise noted.