Leader of the Hive inside the pyramid beneath Bouvet Island.
The Antarctic Queen was a Xenomorph Queen captured by Predators inside an ancient pyramid beneath Bouvet Island and used to breed Xenomorphs that would later be hunted by Predators in initiation rituals. During one hunt, the Queen escaped from her restraints and fled the pyramid after it was destroyed by Scar's Self-Destruct Device, but was fought and defeated by him with the help of Lex Woods.

The Queen seemingly perished when she was dumped into the Antarctic Ocean and dragged into the depths by an iron separating vat that she was chained to.

When Charles Bishop Weyland's expedition entered the pyramid beneath Bouvet Island, Connors unknowingly stepped upon a pressure plate in the floor that roused the Queen from her artificially enforced cryogenic slumber deep within the structure.[1] She immediately began laying Eggs that were delivered to the pyramid's sacrificial chamber by the structure's automated systems, and there were used to impregnate several of the human expedition. The resultant Chestbursters soon matured into Drones, which began stalking the surviving humans, capturing several of them and taking them to the Hive they had constructed in the sacrificial chamber where the first were born. The Queen's offspring also began to battle the Yautja Scar, Celtic and Chopper, who had journeyed to the pyramid for a rite of passage hunt.

Eventually, the Queen called her Drones, now led by Grid, to her side and had them intentionally ravage her body so that her acid blood would melt the chains that restrained her. Now free of her bonds, she shed her ovipositor and made to escape the pyramid, which was obliterated by Scar's Self-Destruct Device, left behind by the Yautja in the Hive. While the Queen's offspring perished, she herself survived and, enraged by the loss of her brood, made for the surface where she confronted Scar and Lex, the only other survivors of the pyramid's destruction.

The three battled in the ruins of Razorback Point Whaling Station. Despite both Scar and Lex dealing severe injuries to the Queen, she fought on and succeeded in mortally wounding Scar when she impaled the Predator on her tail, but not before Lex and the Yautja had managed to chain her to the large cast iron separating vat perched precariously at the top of the cliff at the edge of the whaling station. When Lex sent the vat over the cliff, it dragged the Queen with it, pulling her into the deep, frigid ocean offshore and hauling her down to her doom.

Along with the other creatures seen in the film, conceptual artist Constantine Sekeris originally proposed a radical redesign of the Queen as part of Edge FX's bid to develop the movie's creature effects. Among other differences, the Queen was proposed as a four-legged creature, far more insectile than previous Queens. However, the ideas were deemed too far removed from the Queens seen previously in the series and were rejected.

Even once a design more comparable to the First Acheron Queen had been settled upon, several notable divergences were still proposed. For example, it was originally planned to include a far more pronounced line of spines along the top of the Queen's head crest;[2] while these spines are present in the film, they are more subtle that in original concept sketches. Other differences between the Alien vs. Predator Queen when compared to the one in Aliens that made it into the film include her greater height, her thinner, more "streamlined" body (a result of no longer needing to encase puppeteers inside the model),[3] sharper and spikier head crest, thinner, and more muscular neck.[4] The Queen's hands also lack the distinct holes seen on the Acheron Queen.

The finished Queen animatronic had some 47 points of articulation (far more than the animatronic used in Aliens), powered by hydraulics, and was controlled by 5-6 puppeteers, their inputs fed via a pair of motion control computers, one external, the other housed within the Queen's body.[3][5] The hydraulic and motion control systems used to animate the Queen date back to Amalgamated Dynamics, Inc.'s work on Starship Troopers.[5] As in Aliens, the full-size Queen was supported by a crane during shooting that was either kept out of shot or digitally removed from the footage subsequently.[3] For several scenes during the final conflict between the Queen and the film's heroes, including full-body shots that showed the creature charging, the Queen was portrayed by a CGI model. A third-scale cable-controlled puppet was also built for shots of the Queen in captivity.[6]

Promotional CGI render of the Queen, with a Drone.

Render of the Queen in her damaged state.

The Queen in her chamber.

Concept art of the Queen by Farzad Varahramyan.

Concept art of the Queen within her chamber by Farzad.

Behind the scenes photo of the Queen.[8]

Ditto.[8]
Add a photo to this gallery 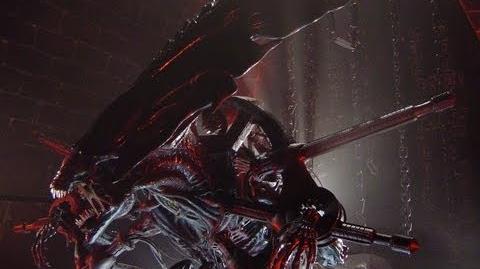 Retrieved from "https://avp.fandom.com/wiki/Queen_(Antarctica)?oldid=264788"
Community content is available under CC-BY-SA unless otherwise noted.