Prometheus to Alien: The Evolution is a 2012 nine to five-disc (depending on the version) Blu-ray/DVD box set containing the films Alien, Aliens, Alien3, Alien Resurrection and Prometheus. It was released only in the United Kingdom and Japan.

The set was available in several different editions that contained varying content. However, with the exception of the physical memorabilia included in the Deluxe version and the set's new packaging, all of the content had been released previously in other home video releases, specifically the Alien Anthology Blu-ray box set and the Prometheus: Collector's Edition Blu-ray set.

The set is available in four different versions:

Apart from the memorabilia in the deluxe release, none of the material included in the set is new — the six Blu-ray discs dedicated to the Alien films and the MU-TH-UR Mode Viewer's Guide are essentially the same as those previously released in the Alien Anthology box set, while the Prometheus discs are taken from the film's Collector's Edition release.

The deluxe edition 9-disc Blu-ray set released in the United Kingdom came packaged with a host of other exclusive merchandise packaged in a sturdy cardboard case, the front of which opens like a book and is secured closed by a magnet. As well as the Blu-ray discs, the set includes an exclusive Weyland Corp t-shirt, featuring a quote ("WE are the Gods now") from Peter Weyland on the front beneath the Weyland Corp logo, an A3-size poster for Prometheus, artcards featuring poster and concept artwork from the five films and an exclusive book extract from Prometheus: The Art of the Film.

*The deleted and extended scenes found on discs four to seven are in fact merely the additional scenes added in the alternate cuts of the four Alien movies. In the case of Alien, this means some of these scenes have been edited from the originally filmed version. 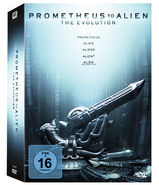 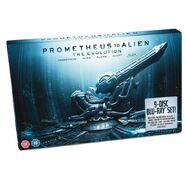 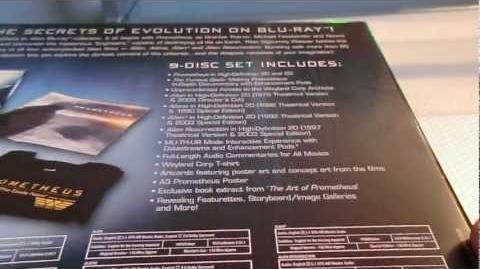 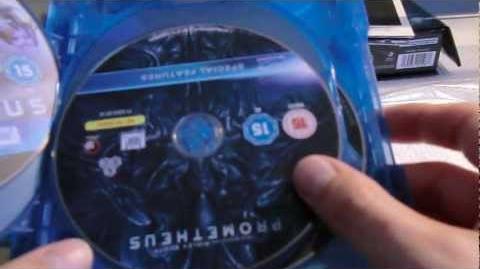 Retrieved from "https://avp.fandom.com/wiki/Prometheus_to_Alien:_The_Evolution?oldid=247974"
Community content is available under CC-BY-SA unless otherwise noted.