Predator: Hunting Grounds is a 2020 asymmetric multiplayer shooter developed by Illfonic and published by Sony Interactive Entertainment for the PlayStation 4 and PC. Set in the remote jungles of the world, it tasks a team of four elite operatives with completing paramilitary operations before a single Predator can find and eliminate them. The game was released on April 24, 2020.

Predator: Hunting Grounds was the first Predator video game in a decade, following the Predators-themed mobile games from Angry Mob and Gameloft released in 2010, and the first full title for consoles since 2005's Predator: Concrete Jungle (although several other games featuring the Yautja were released in the interims).

Players either take on the role of an elite operative with Fireteam Voodoo, a four-man team conducting counter-terrorist operations in remote jungle locations, or the singular Predator that is hunting the squad. As a Fireteam member, players have access to a state-of-the-art arsenal, from pistols to assault rifles, shotguns, grenades and heavy weapons. The Predator player, meanwhile, is able to hunt its human prey with deadly alien tech including the shoulder-mounted Plasma Caster, Combistick, Smart Disc, Wrist Blades and more.

Objectives for Fireteam Voodoo include neutralizing computer-controlled enemy operatives, sabotaging their shipments and retrieving important VIP targets from them, as well as other special tasks. The game's maps offer various tactical opportunities for Fireteam players, from working together as a cohesive unit to splitting their force to reach their objectives. While this element of the game plays out, another player takes control of the Predator and tries to wipe out all of the special forces team members. If the human players manage to kill the Predator, their operation will be taken over by the OWLF and they will be instructed to guard the body against hostiles until they can be extracted.

For the first time in a Predator game, players have the option of playing as a female Yautja.

The game includes a lootcrate system known a "Field Lockers", which are unlocked during gameplay and grant various appearance and weapon customization options for both Fireteam and Predator characters. Field Lockers are randomized and can contain duplicate items, in which case the duplicate item will be converted to additional XP. As well as being a reward for increasing in rank, Field Lockers can also be purchased, either using "Veritanium", a form of in-game currency that can be earned through gameplay or found hidden within the game map. Items may also be purchased directly for Veritanium, although some of the rarer items can be many times more expensive than a single Field Locker.

Hunting Grounds was developed by IllFonic (working closely with 20th Century Fox), published by Sony Interactive Entertainment for release on the PlayStation 4 and PC via the Epic Games Store. The game is currently being developed as a multiplayer-only experience.[1] The team primarily took inspiration from the '87 film for the setting of the game (citing it as the "true crown jewel" of the IP); additionally, as a result of working closely with Fox, IllFonic has been given a unique opportunity in that, everything they make in this game will become a part of the official lore.[2]

There are several playable missions in Hunting Grounds, including the tutorial.

Different recordings can be acquired in the main game that expand the Predator lore, they are divided in three types: OWLF Recordings, Dutch's Tapes and Isabelle's tapes. The firsts are collectibles found randomly on the map while the laters are unlocked by raising levels.

A tie-in prequel novel, Predator: Stalking Shadows, was written by James A. Moore and Mark Morris to accompany the game. 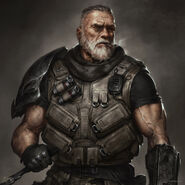 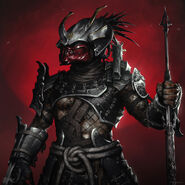 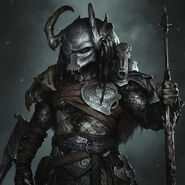 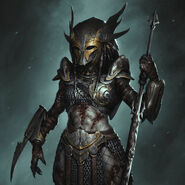 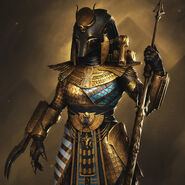 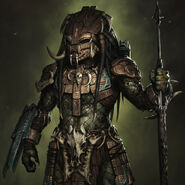