"The city is your battle ground..."
―Predator: Concrete Jungle tagline

Predator: Concrete Jungle is a 2005 third-person action-adventure video game developed by Eurocom and published by Sierra Entertainment and Vivendi Universal Games for the PlayStation 2 and Xbox. In the game, the player controls a disgraced Predator who travels to the futuristic city of Neonopolis intending to regain his honor by killing the humans who stole and exploited his technology.

The game shares its name with a comic book series from Dark Horse Comics, as well as its associated novelization, although it features an entirely unrelated story written by famed comic book writer Grant Morrison.

The game opens in 1930 in New Way City, with a badly wounded Yautja attempting to return to his ship in the middle of a large riot. As the Yautja crosses a roof, the building collapses beneath him and he becomes trapped in the burning ruins. As a last resort, he sets off his ship's self-destruct sequence, leveling much of the city but failing to kill himself. Shamed by defeat and having exposed his race to the humans, the Yautja is exiled by his clan to a remote, desolate planet. As the lone Yautja watches his clan fly away, hostile insect-like creatures emerge all around him and close in.

One hundred years later the Yautja, known as Scarface, stands atop a pile of the dead extraterrestrial creatures. His clan returns to him and offers him a chance for redemption — the criminal gangs in the rebuilt New Way City, now known as Neonopolis, are using highly advanced weaponry reverse-engineered from the equipment that Scarface left behind to capture other Yautja and wage mob warfare amongst themselves. Scarface's clan offers him forgiveness if he returns to Earth, reclaims the stolen technology and slays those who would dare use it. Upon landing in Neonopolis, the Predator quickly begins massacring the city's gangs, soon learning that the equipment they are using has been supplied by Borgia Industries. Scarface raids an underground Borgia depot, destroying it, but is overwhelmed by cyborg troops as he tries to flee and is captured.

While he is unconscious, Scarface recalls events on the night he was disgraced in New Way City 100 years before. He stalks mob boss Bruno Borgia to a museum, killing several of his mafia lieutenants along the way, before defeating the self proclaimed "God of gangsters" in hand-to-hand combat. After the Predator has made the kill, he enters a nearby church and approaches Bruno's wife Isabella, who has just given birth to her infant son Hunter, and shows them Bruno's severed head.

Scarface reawakens inside a high-tech Borgia Industries facility, but quickly escapes his bonds, reclaims his weaponry, frees several other captured Yautja and flees the complex. Lucretia Borgia, Bruno's granddaughter and CEO of Borgia Industries, dispatches three cybernetically-enhanced Bad Blood Yautja to stop Scarface; he defeats two of them, but the third escapes. Scarface then follows Lucretia to the Borgia Industries headquarters, where he finds himself within a holographic recreation of 1930s New Way City, including a perfect replica of the church where he confronted Isabella 100 years before. Inside, Scarface duels and finally kills the third Bad Blood, before entering the chamber housing MOTHER, the supercomputer that controls Neonopolis.

MOTHER is revealed to be Isabella Borgia, somehow still alive after 100 years, held inside a preserving tank and linked into the city's computer network. She at last reveals to her granddaughter Lucretia what happened on that fateful night in New Way City — as Scarface approached her in the church and removed its bio-helmet, she shot the Yautja in the eye, splashing both herself and her newborn son Hunter with the creature's blood. It was this blood that has unnaturally prolonged their lives. Meanwhile Scarface, wounded and confronted by more of Bruno's men, was forced to flee the scene, leaving behind much of his equipment.

As MOTHER tells Lucretia of her ultimate plan — to clone an army of Yautja for her own ends — Scarface enters her chamber. He prepares to finish her, but Isabella reveals one last trick and unleashes a swarm of Xenomorphs upon him. Scarface descends into the Hive below, fighting through an endless stream of Xenomorphs and sabotaging MOTHER's security systems, finally allowing him to kill her. With Isabella dead, Scarface pursues Lucretia, only for her to be killed by her own father Hunter, who has undergone incomplete genetic manipulation to become a hybrid of human and Yautja traits. A final battle takes place between Scarface and Hunter, raging out onto the roof of the building, with Scarface eventually taking Hunter's head as a trophy. After painting his clan's symbol on the face of the giant statue of Bruno Borgia atop the Borgia Industries building using Hunter's hybrid blood, Scarface is recovered by his clan and accepted back into their fold, redeemed.

Some time later, an individual identified only as Mr. Weyland buys out Borgia Industries, turning Lucretia Borgia into a new MOTHER computer, as agents from the Yutani Corporation congratulate him for his success.

As Scarface, the player has access to many of the weapons seen in the Predator movies and comics, including the Wristblades, Plasmacaster, Combistick and Smart Disc, along with an array of new weapons such as the Glaive, Maul and several varieties of Throwing Mine. The player can also cycle through several vision modes, including the classic Thermal Vision, which shows heat from bodies and can scan targets for body armor and any augmentation, Tech Vision, which highlights grates, objectives, recharge stations and Xenomorphs, and can also scan enemies for weapons and any strengths and weaknesses, and Neuro Vision, which shows the mental state of enemies, and can scan their behavior, faction and rank. The game also incorporates a "normal" vision mode, which is comparable to typical human sight, for gameplay reasons.

Almost every weapon in the Predator's arsenal can be upgraded by finding weapon upgrades scattered throughout the game's levels, with a total of three tiers (including the basic, starting version) available for each weapon. Several weapons consume energy when used, as does the Predator's Cloak; energy is finite but can be refilled from various sources of electricity that act as recharge stations scattered throughout the game's levels. In addition to the story's core objectives, the player can often accomplish bonus tasks that will increase the Predator's health, armor and energy capacity. Some bonus objectives will also unlock alternative skins for the player character, several of which are based on the Predators seen in the film series.

Players are able to attack enemies in a variety of ways, including special combo moves and violent stealth executions. Boss characters can be finished by the player with a special trophy kill move, which typically involves tearing off the defeated target's head and collecting the skull as a trophy. These trophies can then be viewed in the gallery section of the game's menus, offering background information on the victims and unlocking bonus "Ritual" missions, in which the player must make their way through a timed obstacle course.

Predator: Concrete Jungle makes several links between the films of the Alien, Predator and Alien vs. Predator franchises. At one point, Lucretia mentions that Hunter was "friends with Charles Weyland before he disappeared"; Charles Bishop Weyland appears in the film Alien vs. Predator leading an expedition to the Antarctic, where he is ultimately killed by a Predator. Another, unidentified Weyland appears at the conclusion of the game, and both Weyland Industries and the Yutani Corporation are mentioned, referencing the Weyland-Yutani Corporation of the Alien films. MOTHER, the name of the computer controlling Neonopolis in 2030, shares its name (and, to some extent, its role) with the Nostromo's computer MU/TH/UR 6000 in Alien.

Several other references to the film franchises are made throughout the game, including the appearance of Xenomorphs. One of the levels involving the creatures additionally references the movie Aliens with its title "Bug Hunt". Furthermore, one of the upgraded versions of Scarface's Plasmacaster is made from a Xenomorph skull. Several of the unlockable alternate skins for the player character are based on Predator characters from the films, including the Jungle Hunter from Predator, the City Hunter from Predator 2 and Scar from Alien vs. Predator.

Predator: Concrete Jungle received largely mixed to negative reviews, with the strongest criticism directed at its control scheme, which was labelled "ridiculously confusing" and which rendered playing the game a "frustrating chore".[1] Aggregating review website GameRankings and Metacritic gave the PlayStation 2 version 51.31% and 47/100,[2][3] respectively, and the Xbox version 48.07% and 46/100.[4][5] IGN labelled the game "a good idea gone bad", remarking on the title's potential but citing the poor controls, hokey story and awkward gameplay as factors that ultimately dragged it down.[1] Similarly, GameSpot criticized the game's storyline, graphics and the "atrocious checkpoint system that always makes you start over an entire mission if you botch any part of it".[6] However, despite the critical reviews, reception amongst fans of the series was notably more positive.

Scarface stalking the streets of Neonopolis 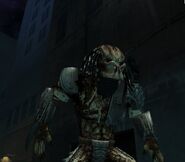 Scarface with City Hunter skin
Add a photo to this gallery

Concept artwork of Scarface in Neonopolis.

Predator concept art for the game.

Retrieved from "https://avp.fandom.com/wiki/Predator:_Concrete_Jungle_(video_game)?oldid=245467"
Community content is available under CC-BY-SA unless otherwise noted.