A Predalien is the playable Xenomorph character in the 2002 video game Aliens versus Predator 2: Primal Hunt.

This particular Predalien started its life as a Facehugger hatched within a Yautja encampment on LV-1201 in the midst of a Xenomorph outbreak. The Facehugger sought out the Ancient Predator as he was attempting to put up a stasis field around a nest of Xenomorph eggs, but right as the Facehugger leapt towards him, the field activated and both of them were frozen. However, it inevitably manages to subdue the Yautja. After the Ancient sends a distress signal from the Forward Observations Pods (which apparently is caught by Prince's ship), the Predalien Chestburster bursts out of him.

After finding an ample food supply in the morgue (human cadavers), it matures and begins to slaughter Weyland-Yutani Corporation guards and escapes Pod 5 along with many other Aliens as Rykov self-destructs it. It is confirmed that it wasn't the Predalien which the Drone freed later in Pod 2 only to be killed by Harrison, or one of the two Predaliens that ambushed Prince (both were also killed by Prince). The two Predaliens are killed in the level "Old Debts", where Prince fights them. Two chestbursted Predators can also be seen lying on the ground.

Option to play as Predalien in AVP2: PH. 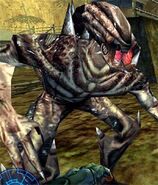 View of Predalien in multiplayer.

Retrieved from "https://avp.fandom.com/wiki/Predalien_(LV-1201)?oldid=240004"
Community content is available under CC-BY-SA unless otherwise noted.