Xenopedia
Register
Don't have an account?
Sign In
Advertisement
in: Xenomorph individuals, Predaliens, Aliens featured in the movies,
and 8 more
English

Leader of the Hive in Gunnison, Colorado.
Could impregnate hosts without the need for a Facehugger.
Killed two Yautja.
Matched an Elite Predator in combat.

Tom Woodruff, Jr.
The Gunnison Predalien, also known as the Earth Predalien, was a Predalien that was born from Scar after he was impregnated by a Facehugger during his hunt in a pyramid beneath Bouvet Island. The creature was responsible for terrorizing the town of Gunnison, Colorado on Earth in 2004 by impregnating hosts and producing Xenomorphs.

The Predalien was killed when a tactical nuclear bomb was dropped on Gunnison by Colonel Stevens, along with Wolf it was battling and any surviving Xenomorphs and residents in the town.

This Predalien possessed mandibles, dreadlocks, a yellowish hide, and had a large multi-spiked blade for a tail. The dome covering the head was also slightly more transparent than a Drone's and hollow eye sockets could be seen beneath. The Predalien's tail was much thicker, longer, and less skeletal than a human-spawned Drone's. Its blood seemed to be slightly greener than that of the Xenomorphs spawned from other creatures, suggesting it inherited some aspects of the glowing blood of its host.

The Predalien also appeared to emit greater or at least different electromagnetic pulses than human-spawned Xenomorphs. Bio-helmets displayed the Predalien as a bright yellow color compared to the neon green of a Drone. This particular Predalien was a young Queen, as it had the ability to impregnate female hosts with multiple (up to five) Bellybursters via an inner jaw proboscis-like tube inserted into the host's throat (much like how a Facehugger impregnates a host)[5]. It also has a large crest similar to that of a Queen Xenomorph. The Predalien was shown to possess titanic strength, as it was able to effortessly break through solid concrete and outmatch and overpower a Predator with ease; this is because a Xenomorph is always stronger than its host type.

During a ritual Xenomorph Hunt on Bouvet Island, Antartica, the Yautja Scar was attacked by a Facehugger. After his death in battle fighting a rampaging Xenomorph Queen alongside Lex Woods, Scar's fellow hunters took his body on board their waiting Mother Ship and laid him atop a crypt.

As the Mother Ship left Earth, the infant Predalien erupted from the Predator’s chest. Sneaking aboard a Scout Ship that detached from the Mother Ship, the Predalien molted as quickly as the Antarctic batch of Xenomorphs, moving stealthily past containers holding numerous captive Facehuggers. The Predalien kills a Predator but in the process alerts a second individual, who opens up on its adversary with a Plasmacaster. Stray bolts ripped into the hull of the ship as it neared Earth, causing the ship to crash-land in the town of Gunnison, Colorado. The lone surviving Predator activated a distress signal before its death at the jaws of the Predalien. The latter and the liberated Facehuggers then crawled into the woods to find human hosts attempting to establish their Hive somewhere.

The Predalien, two Xenomorph Drones and numerous Facehuggers scattered themselves into the Gunnison County sewers, where the parasites impregnated a camp of homeless people. Encountering the female member of the homeless camp, the Predalien knocked a Xenomorph aside. Bypassing the egg-laying and facehugger stage altogether, the Predalien deposited Xenomorph embryos directly down her throat to gestate in her stomach.

In response to the distress call, the Yautja Wolf arrived on Earth to clean up the infestation and cover up any evidence of the Xenomorphs' presence. Wolf entered the sewers and lured the Drones into battle, before the Predator could make a killing strike on two pinned aliens, The Predalien suddenly appeared and whipped its tail at Wolf, sending him flying into the wall and causing him to misfire his twin plasma casters; they blasted a hole to the streets above, allowing the Predalien and its army to escape from the sewers. Moving into the heart of Gunnison, it entered a diner, where it killed the cook, Ritchie, and implanted embryos into the pregnant waitress, Carrie. After several more Bellybursters were born and the Xenomorphs began to overrun the town, the Predalien and its Drones invaded the local hospital. The Predalien entered the maternity wing and deposited more of its young into the pregnant women while the Xenomorphs secreted Hive resin on the walls.

Tracking the Predalien to the hospital, Wolf battled with the humans who were seeking to escape in the hospital’s helicopter. After Wolf was shoved down an elevator shaft, the Predalien impaled Ricky Howard with its tail, severely wounding him. It was forced to retreat as Ricky's brother, Dallas, fired at the Predalien with an M4A1.

The four humans narrowly escaped the blast from a tactical nuclear bomb dropped on Gunnison to contain and cover up the infestation. Locked in mortal combat, the Predalien, Wolf, the Drones, the Hive, and all the remaining residents of Gunnison were incinerated in the blast.

About a year before Amalgamated Dynamics, Inc. began production on Aliens vs. Predator: Requiem, they got a call from producer John Davis, who told them that they may be working on the film. They generated a couple of designs for the Predalien and Alec Gillis had an idea for a Queen-like version. He sculpted a head using castings of teeth from ADI's miniature Queen used in Alien vs. Predator and, for the dreadlocks, cast multiple tails from the molds of the miniature Alien from Alien3, which he then heat-formed them into shape. Artist Steve Koch then photographed the sculpture and digitally added mandibles from the Predator in ADI's showroom and gave the creature the appropriate paint scheme.[6] Beneath the carapace, the creature featured human-like eye sockets, an element re-used from the original Alien in Alien 29 years earlier.

Meanwhile, Woodruff worked with frequent ADI collaborator Jordu Schell on a full body maquette of another version of the Predalien. This one leaned a bit more towards the Predalien aesthetic, particularly in the anatomy of the body. Again working with Koch, the maquette was photgraphed and composited into a shot towering over a human.[7]

In designing the hybrid of the two creatures, Amalgamated Dynamics, Inc. had to keep in mind that the infant Chestburster had gestated inside a Predator, but it was not actually an offspring of a Predator. It was still basically an Alien, but it had taken on some of the characteristics of its host. It also had to look more like an Alien so that the audience would believe its loyalties were with the Alien species and not the Predators. To estimate the proportion of the combo, ADI went with 80% Alien and 20% Predator, but the proportion was changed when a 14-year old happened to be walking through the halls of 20th Century Fox, saw the maquette and said "Wow! Cool Alien!" The observation led to much discussion about how to make it look more like a Predator, and some last minute adding of dreadlocks to increase the Predator "feel".[8]

During filming, the Predalien was nicknamed "Chet" by the production crew in order to mask its presence in the film. The name has since stuck and been used by the crew to refer to the creature in various behind the scenes media. The name was allegedly a reference to actor Bill Paxton's character in Weird Science,[citation needed] Paxton having played Private Hudson in Aliens and Detective Jerry Lambert in Predator 2.

2 disc Special Edition with extra features and additional commentary regarding the Predalien.

The Predalien in EM Vision.

Predalien and Wolf both mortally wounded.

The Predalien about to impregnate a pregnant woman.

The Predalien in the Gunnison sewers.

Behind the scene photo of the birth of the Predalien.[13]

The Predalien and Wolf approaching each other.

The Predalien impales and wounds Ricky.

NECA figure of the Predalien.

Hot Toys figure of the Predalien. 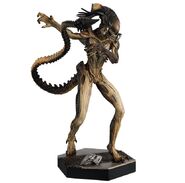 Eaglemoss Collections figurine of the Predalien. 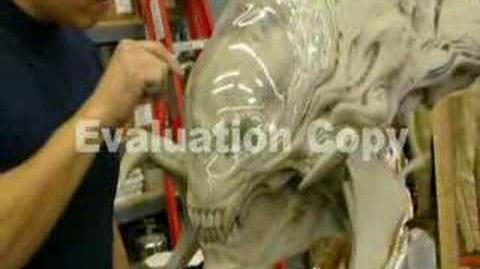