"There was one big motherfucker, like twice the size of the others... That thing could really scream. I never heard anything like it."
―Cpl. Tequila, regarding a Praetorian (from Aliens vs. Predator)

The Praetorian, also known as the Royal Guard,[1] was one of the final stages in the life cycle of the species Xenomorph XX121, and arguably the most common and widely-acknowledged form of Xenomorph to emerge from the numerous expanded universe castes. Praetorians were created when a hive population reached over 300 individuals, and served as Queen or Empress' Royal Guard and army commanders.[2] Unlike other Xenomorph types, Praetorians rarely operated outside their Hive grounds. Visually, Praetorians resembled a Queen, though they were smaller in size but still far larger than typical Xenomorphs, typically standing at least ten feet tall.

A Praetorian's most distinguishing feature was its large head crest, similar to that of a Queen, which they would often employ to ram targets in a charging attack. Unlike Queens, however, Praetorians did not possess a second pair of arms on their chest, and their jaws, filled with metallic teeth, were comparable to lower Xenomorph castes. Like Queens, Praetorians typically possessed longer dorsal spines that ended in a sharp point when compared to other Xenomorphs that possessed these appendages. Praetorians were dark in color, typically black but sometimes black-blue and stood over 10 feet tall, towering over their fellow Xenomorphs on the battlefield.[3] Despite this size, they were almost as fast and agile as their smaller Xenomorph siblings, although Praetorians seemed to remain in a permanent bipedal position, and owing to their bulk, they were unable to scale walls or ceilings.

As was befitting of their size, Praetorians were incredibly strong and their thick skin, known to be bulletproof in some cases, enabled them to shrug off damage that would be terminal several times over to most other Xenomorph castes. They were capable of defeating entire squads of human Marines single-handedly and were even a match for Yautja in close-quarters combat. Praetorians could spit acid in far larger quantities than other Xenomorphs, and could also use their claws and long blade-tipped tails as slashing and stabbing weapons, making them deadly at any range.[3]

Praetorians were smarter and more cunning than typical Xenomorphs. However, owing to their size and strength, Praetorians simply had no need for stealth and tactical movement in most cases and would attack targets directly. Owing to their role in protecting the Queen herself, they would ferociously combat any threats without concern for their own safety or survival, making them dangerous opponents. Due to their role as army commanders, Praetorians were known to emit a deafening screech to summon additional Drones to their aid.[3] It was said that killing a Praetorian would temporarily disorient the Drones it coordinated.[2]

When a Hive grows over 300 individuals, the Queen chose Drones from her brood to become Praetorians, the chosen ones are feed by Workers with Royal Jelly until the transformation take place.[2] During the transformation chosen Drones would begin to produce a pheromone that would cause the rest of the Hive to turn against and attack it.[4] This process would result in the deaths of most such individuals, but for those that survived and escaped, the ordeal would serve to strengthen the individual. Now away from the Hive, the pheromone would begin to initiate physical changes in the individual, causing them to grow into the Praetorian form.[4] Once the change was complete, the pheromone would cease to be produced and the new Praetorian would return to their Hive and take their place beside their Queen.

Some sources state that there is an intermediary stage between chosen Drones and full Praetorians, known as Royal Guards, a name which is also used to describe fully grown Praetorians. The Royal Guards are very similar to Praetorians but are smaller and weaker, have a less developed crest, and show more Drone-like features in the shape of their carapace, tail, and overall mesoskeleton.[5] For this reason, it is possible that the Royal Guard merely represents a stage of molting for juvenile Praetorians as their bodies change from a Drone to a fully grown Praetorian and is not a separate caste or evolutionary stage.

It was debated whether a Praetorian will adopt genetic traits from its host as with most other Xenomorph castes, but this unlikely the case as only Drones can evolve into Praetorians.[2] The Crusher[6] is considered to be the "Praetorian form" of a Runner Xenomorph and the product of a Royal Jelly force-fed Xenomorph Sentry, the "middle stage" between a Runner and Crusher.[2]

Similar to how Praetorians are said to evolve from Drones, if a Hive lose its Queen a Praetorian would molt into a new one so the hive can be preserved and not claimed by another hive[2], however, if the transformation doesn't occur the hive is taken over and the former Queen's eggs and Praetorians are eliminated.[7]

Specimen 6 is an example of a presented transformation process, during its journey on BG-386, which it started as a Drone; it absorbed a great quantity of Royal Jelly and molt into a Praetorian. Shortly after in a Weyland-Yutani transport it was seen molting into a Queen, as its one died from the hand of Rookie.[3]

Under certain circumstances, Praetorians can molt and evolve into Palatines, Queen-sized Xenomorphs and protectors of the Queen Mother.[8]

A Royal Guard/Praetorian in the Alien vs. Predator arcade game.

A Praetorian in the 1999 game Aliens versus Predator. 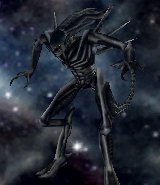 A Praetorian in Aliens versus Predator 2. 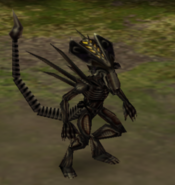 A Praetorian in Aliens versus Predator: Extinction

The Praetorian multiplayer skin in Aliens vs. Predator.

Rookie fights a Praetorian in Aliens vs. Predator.

A Praetorian in Aliens vs. Predator multiplayer; compare its smaller size with the singleplayer version in the previous image.

A Praetorian in AVP: Evolution.

Promotional screenshot of a Praetorian from Aliens: Fireteam (note the tan carapace).

Concept art of the Xenomorph from Aliens: Defiance. 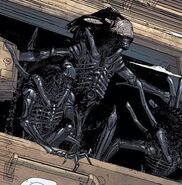 Though not necessarily a Praetorian, the Alpha from Alien: Bloodlines shares many distinctive traits akin to the caste. 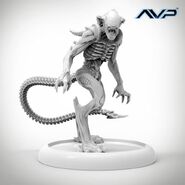 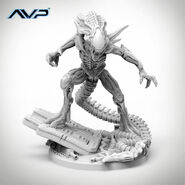 Prodos Games figure of a Praetorian.