Xenopedia
Register
Don't have an account?
Sign In
Advertisement
in: Weapons and technology of the Hunt, Melee weapons

Yautja
The Power Punch glove,[1] also known as the Steel Wrist Shield or Arm cladding,[2] was a Yautja device consisting of a metal bridge that extended on command from a Predator's wrist gauntlet to connect with "brass knuckles" worn on the hand.[1] It was used to give a Yautja a boost in punching strength, allowing a user to perform a punch powerful enough to make a hole in solid concrete.[1]

In 2004, after a fight with a group of Xenomorphs controlled by a Predalien in the sewers of Gunnison, Colorado, Wolf used a Power Punch glove to create a hole in the ceiling of the sewers, allowing him to pursue the Xenomorphs that had escaped to the surface.

Various designs for the Power Punch glove were made by Michael Broom. At one point in the design phase, the Power Punch feature was going to involve Wolf's entire left arm. His existing armor would transform and expand, including flanges that flared out to shield him from splattering Alien acid blood. A drawing of the full arm design was made by Farzad Varahramyan.[1]

The Power Punch glove was sculpted in clay on a resin cast of Wolf's hand to ensure "maximum precision."[3] 2 stunt props in the deployed position were ultimately created for the film.[2] However, the weapon itself is never shown very clearly in the film, only heard through its deployment sound. 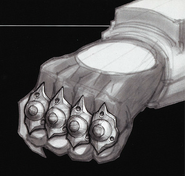 A design by Broom showing the glove in the undeployed and deployed positions.[1]