Xenopedia
Register
Don't have an account?
Sign In
Advertisement
in: Weapons and technology of the Hunt, Plasma weapons, Predator (film) weapons,
and 8 more

Yautja
The Plasmacaster,[1] also known as the Plasma Cannon,[2] Laser Cannon[3] or Shoulder Cannon,[4][5] is a Yautja long-range energy projector weapon with automatic targeting capabilities. Capable of firing armor-penetrating plasma bolts at distant targets, it is arguably the most devastating and technologically advanced offensive tool at the Yautja's disposal. The bolts fired by the weapon explode in a burst of plasma "shrapnel" upon striking a target, causing grievous wounds and potentially damaging other enemies near the point of impact.[1]

Young Blood Yautja are denied the use of Plasmacasters and must undergo a Rite of Passage, whereby they must Hunt Xenomorphs using only their close-range weapons, in order to obtain the weapons.[6] Despite the enormous power of the Plasmacaster, or rather because of it, it is considered among the least honorable weaponry the Yautja possess.[1] Often, when faced with particularly worthy prey, a Predator will discard his Plasmacaster and rely instead on its more basic weapons.[7]

The most commonly seen variant of the Plasmacaster is shoulder-mounted via an articulated arm — indeed, this weapon is arguably one of the Yautja's signature pieces of equipment. Capable of firing multiple long-range bolts of charged plasma, the power of each individual burst can be adjusted manually, ranging from a minor setting to kill individual prey to a blast powerful enough to breach the hulls of interstellar craft. These energy bolts are typically pale blue in color,[7][8] although yellow and gold colored shots have also been observed.[9]

The Plasmacaster is aimed via a targeting system typically built into the Predator's bio-helmet, causing the weapon to track with the user's head movement, although some have been seen with integral targeting systems.[9] Generally, a three-pointed targeting laser sight arranged in a triangular formation is used to increase accuracy. The tracking servos of the weapon are some of the most vulnerable articles carried by a Predator and damage typically renders the weapon unusable,[9] although some models can be modified and used as a hand-held Plasma Pistol in the event of tracking failure.[10] Plasmacasters also appear to have some degree of targeting memory, able to track and fire at a target even if the Predator itself turns in another direction,[9] although it is possible this may only apply to stationary targets.

The exact mechanism by which the shoulder-mounted Plasmacaster is fired remains unclear. While some individuals have been seen to fire the weapon using their wrist gauntlet, others have done so without any apparent input; it has been suggested that Predators may activate the Plasmacaster by manipulating buttons on the inside of their bio-helmet with their mandibles. A Plasmacaster can be charged by the user when fired to generate a more powerful shot that is more damaging to prey.[8][4] By default, the weapon's attack range is greater than the Predator's visual range, however a Predator's helmet incorporates a zoom function that changes this relationship, enabling a Predator to act as a sniper if required.[11] The basic shoulder-mounted Plasmacaster can be dual wielded (i.e. one on each shoulder) if two are collected, although this does not seem to be common behavior and is reserved for particularly dangerous situations.[10]

The shoulder-mounted Plasmacaster Classic fires explosive Plasma Bolts.[12] It is the most common Plasmacaster variant, having been used by the Jungle Hunter and many others.

Upgraded Plasmacaster outfitted with a bio-scanner and a multi-barreled firing mechanism. These features allows a Yautja to scan a target and attack them with any of three types of plasma munitions which they susceptible most [13]:

The Plasmacaster Celtic[12] is a relatively large shoulder-mounted Plasmacaster capable of automatic fire.[12] Despite its name, Celtic did not use one during his 2004 hunt in the Pyramid under Bouvet Island and it was Scar who did use one during the hunt.

The Plasma Pistol is a handheld version of the Plasmacaster. Both purpose-built and custom-assembled versions have been known to exist, the former generally more versatile than the latter.

The Energy Flechette fires a small plasma bolt from the Predator's left wrist gauntlet. It seems to be only moderately damaging, and is likely a last-resort weapon.

The Berserker and the Tracker on the Game Preserve Planet used a slightly modified Plasmacaster design that employs a revolving action to fire multiple plasma bolts at any time, similar to a Gatling gun. Berserker and Tracker both used this weapon while hunting captured humans on the planet.

The Fugitive Predator's bio-helmet had a built in Plasmacaster that automatically activated when attacked and firing in the direction of the damage, as demonstrated by Rory McKenna.

The Upgrade Predator utilizes wrist gauntlet, which similar to that of Energy Flechette but with firepower equal to that of standard Plasmacasters and thus has greater range.

Model maker Nick Seldon worked on prototypes for the large Plasmacaster.[17] To endure the rigors of shooting an action film, it was necessary to produce multiple copies of all the weapons and armor, including the Plasmacasters. "Great care" was taken to match the level of aging and detail on the duplicates of each prop.[18]

Using the (at the time) few available reference photos and dark, blurry screen captures from Predator, the original Plasmacaster from the film was "painstakingly" recreated to be "as authentic as possible."[19] The prop of the weapon made for the shot where the humans find three of the weapons in the sarcophagus was cast from a dense rubber, finished with a metallic crackle finish and measures 28 cm x 10 cm x 10 cm.[20] Traces of black tack were left on the underside when it was used in filming.[20] The rubber prop was sold by the Prop Store via their website[20] and apparently later sold on Amazon.com.[21]

The animatronic large "Caliber" Plasmacaster used by Scar was mechanized by mechanical designer Lon Muckey, who was assisted by mechanical designer Samara Hagopian.[14] As the medium and "original" Plasmacasters are only ever seen displayed inside the case and stored in backpacks, they were likely represented entirely by static props, with the larger weapon being the only one of the three to be represented by a prop with animatronics. 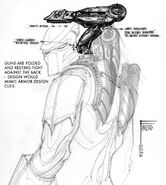 Concept art of a Predator with a Plasmacaster by Farzad Varahramyan. 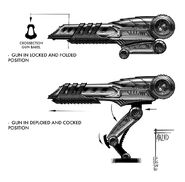 A Plasmacaster with integral laser sight being used in Aliens versus Predator.

Promotional render of the Plasmacaster from the video game Predator: Concrete Jungle.

A behind-the-scenes shot of the City Hunter's Plasmacaster