"Planet number four is square in the habitable zone. Prime candidate in fact. Zero point nine six G's at the surface. Oceans. Landmass. High likelihood of living biosphere. It's beyond your most optimistic projections for Origae-6."
―Ricks (from Alien: Covenant)

Neomorphs
Praetomorphs
Planet 4, also referred to as the fourth planet, the Engineer Planet, and Paradise, is the planet that the USCSS Covenant, on its way to Origae-6, set out to explore after receiving a rogue transmission from its location. The planet had at least one large city populated by the Engineers.

Planet 4 is the fourth of five planets that are part of an unknown system located in an uncharted area of deep space known only as Sector 87. It has two moons of its own, each smaller than Earth's. It consists of 19.5% oxygen, 79.4% nitrogen, and 15.4 PSI in barometric pressure.

The planet's ecosystem was drastically altered by David when he unleashed the Chemical A0-3959X.91 – 15 pathogen on the Engineer's city. As a result of this event, all non-botanical life was either exterminated or used as an incubator for the gestation of hybridized predatory creatures such as the Neomorphs.

Before Davids' cleansing of Planet 4, the planet was populated with at least one city of Engineers. After David's experimentation with the pathogen, Planet 4 became home for the Neomorph species that were spawned from airborne spores released from mutated egg sacks, and for the Praetomorph species after David created Ovomorphs containing Facehuggers.

Sometime after the Covenant departed Planet 4, a team from Weyland-Yutani arrived on the planet to investigate David's actions. While exploring the lab to document the rogue synthetic's scientific discoveries, one of the explorers inspected a Ovomorph and was attacked by a Facehugger.[1] 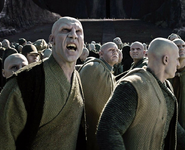 Planet 4's inhabitants running from a Juggernaut piloted by David who has just unleashed the pathogen.

Aftermath
Add a photo to this gallery

Concept art of David unleashing a swarm of locust-like organisms upon the Engineers.

Concept art of the Mother Juggernaut on Planet 4.

Concept art of the Juggernaut in Planet 4.

Concept art of the Juggernaut by Petrov.

Retrieved from "https://avp.fandom.com/wiki/Planet_4?oldid=269821"
Community content is available under CC-BY-SA unless otherwise noted.