"For those of you who do not yet know me, allow me to introduce myself. My name is Peter Weyland, and if you'll indulge me, I'd like to change the world."
―Weyland (from TED Conference, 2023)

Guy Pearce
Sir Peter Weyland was a billionaire entrepreneur and inventor, and the founder and CEO of Weyland Corp. In 2089, he agreed to fund a scientific expedition to the moon LV-223 at the request of Drs. Elizabeth Shaw and Charlie Holloway,[5] where it was hoped humanity would make first contact with the race of extraterrestrials that had apparently created them, dubbed the Engineers; the expedition finally departed aboard the USCSS Prometheus four years later.[6] When the team of scientists finally made contact with the Engineers, they found them to be hostile and the expedition failed disastrously.

Unbeknownst to the crew of the Prometheus, Weyland secretly stowed away aboard the vessel, planning to make contact with the Engineers himself in the hopes they would be able to extend his life-span. However, he was ultimately killed by the very race he hoped would help him.

Peter Weyland was born in Mumbai, India on October 1, 1990, to his mother, an Oxford-educated Professor of Comparative Mythology, and his father, a self-taught engineer.[1] At the age of 14, he was granted a Method Patent for a synthetic trachea constructed entirely of synthetically-engineered stem cells, becoming his twelfth registered patent to date. On October 11, 2012, Peter Weyland founded the eponymous Weyland Corp.

The Rise of a Maverick

On March 27, 2015, Weyland made his first billion thanks to the renewable energy gathered following the installation of solar panels that align and move in Earth’s orbital plane but at an axial tilt, imitating a perpetual summer solstice. This is the first successfully industrialized space mission of the Weyland Corporation, which receives funding from a trio of major venture capital firms. On February 2, 2016, he effectively ended global warming by generating a localized synthetic atmosphere above the polar ice caps using a precursor to the atmospheric processor of his own invention. Three months later, at the age of 26, Sir Peter Weyland became one of the youngest people ever to achieve a knighthood.

On December 10, 2017, Weyland is honored with the Nobel Prize in Science for his extraordinary atmospheric work over the polar ice caps. Using capital from his 2015 success, Weyland acquires copyrights to technology developed by NASA’s innovative but poorly funded Project Prometheus. On December 19, 2017, and with significantly augmented funding for the project, JIMO became a reality and proves the existence of simple life in Europa’s ocean.

Weyland was awarded the Nobel Prize in Medicine for his cancer cure on February 4, 2023. During his TED Talk on February 28, he clarified his vision for the Weyland Corporation, laying the groundwork for the next fifty years of Building Better Worlds. In January 7, 2024, Weyland manufactured the first advanced android prototype model of its kind. He is affectionately called David, a name Weyland had initially reserved for his own human son. At some point, the Japanese start-up Yutani Corporation lawsuit attempted to sue Weyland for the patent of the android. During 2026, Weyland acquired Genentech, significantly bolstering the company’s biotech holding, and privatized NASA’s famous Kepler mission, increases its funding tenfold and, within the year, discovered 6,546 more bio-compatible planets.

In June 23, 2065, the Sir Peter Weyland Memorial Library is built in Washington, DC.

In 2089, Elizabeth Shaw and Charlie Holloway interpreted a star map appearing across several unconnected ancient cultures as an invitation by humanity's creators.

Sir Peter Weyland took note of the information but in an audio journal he stated that he found it only mildly interesting, although he did find Elizabeth Shaw's naive attitude for the venture refreshing. In the same journal, he mentioned that he had approved the trillion-dollar venture but not truly under the pretense that Shaw believed. For unknown to Shaw, Weyland's science division had actually reported detecting a faint, almost imperceptible signal coming from the neighboring moon of LV-426. It was there that Peter and his science division believed that greater rewards lay. As such he made arrangements for the android David who would accompany the mission to be armed with the knowledge of LV-426, which he would not report to any of the crew until the time was right.[7]

At some point after receiving Elizabeth Shaw's proposal, Sir Peter Weyland arranged to send out a probe to LV-223 in an attempt to verify Shaw and Holloway's claims about the moon. In April 4 of 2090, Sir Peter Weyland's probe arrived at LV-223 with the intention of surveying the surface. Before it could complete its readings however, it was crushed by one of the Engineers residing there.[8]

In 2091, at the age of 101, Peter Weyland funded the creation of the scientific vessel USCSS Prometheus, to follow the map to LV-223. Presumably before the Prometheus' departure, Weyland recorded a holographic message on June 22 of that same year for the crew of the Prometheus which they would witness upon reawakening from hyper sleep. But unbeknownst to any of the Prometheus crew other than David, Vickers, his bodyguards, and a doctor, Weyland was secretly aboard the Prometheus in hypersleep throughout the two-year journey and subsequent mission, as Weyland was expected to die soon, and he hoped that the Engineers would be able to extend his lifespan.

After the Prometheus reached LV-223 in 2093, Weyland was awakened shortly after Holloway's death, and intended to travel with David to the Engineers' ship to awaken the last remaining Engineer from its hypersleep and get the immortality he wanted from it. Weyland suited up with an exoskeleton-equipped space suit that enabled his fragile body to stand and walk on its own, and had Shaw, David, Ford and Jackson take him into the Engineer ship and awaken the surviving Engineer, despite Shaw pleading to Weyland that the Engineer was not the benevolent creator he thought it was. However, after being awakened, the Engineer attacked the group, decapitating David and mortally injuring Weyland by violently hitting him across the head with David's head. Weyland died from his injury moments later; declaring with his dying breath, "There's... nothing..." as David's still-functioning head said goodbye to his "father".[3]

Peter Weyland was a determined man who, even after all his success with his company, was still not satisfied, as he wanted to extend his life even further, if not indefinitely. After hearing what Shaw and Holloway had to say, he became convinced that the Engineers could save him from death, something which he feared greatly. Unlike other company members depicted in the franchise, Peter does not seem to care or obsess about the Xenomorphs or the similar life-forms seen in Prometheus. He is not concerned that Shaw is not frozen (which David had told the medical team to do) or that she removed the Trilobite that was growing within her, as he seems more obsessed with extending his own life rather than bring hostile life-forms back to Earth for studying. It is not known if he gave the order for Holloway to be infected or if it was just David's choice, but he may have asked David to bring back the samples to see if they had what was necessary to extend his life, showing a possible disregard for the health and safety of the crew, as the black liquid was secretly brought back on board without going through scans or quarantine procedures.

Originally, it was planned to have an older actor portray Weyland, and director Ridley Scott had either Rutger Hauer (who had previously worked with Scott on Blade Runner) or Max von Sydow in mind for the part.[9] When it was later decided to feature Weyland's younger self in the film, Scott instead opted to cast a younger actor and have them wear prosthetics and makeup to "age" them for scenes where the older Weyland appeared; while the scenes showing Weyland as a young man were ultimately cut before filming, Guy Pearce was nonetheless cast as the character.[9] During production, Scott cited entrepreneurs Rupert Murdoch and Richard Branson as inspirations for Weyland, if only in terms of their huge business empires and commercial drive rather than their specific personalities.[9] 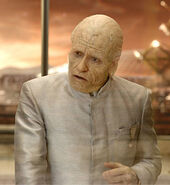 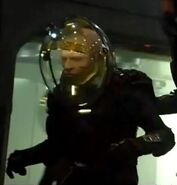 David and a dying Weyland.

A middle aged Peter Weyland, appearing in a flashback of David.