"I can drive that loader. I have a Class-2 rating."
―Ripley, lending a hand aboard the USS Sulaco (from Aliens)

Power Loader — Weaponized
Exosuit
Wheeled work loader
The P-5000 Powered Work Loader,[1] commonly referred to as the Power Loader, is a commercial mechanized exoskeleton used for lifting heavy materials and objects. As well as widespread industrial use, the P-5000 is heavily employed by the United States Colonial Marine Corps to load ordnance on board their starships.[2] Power Loaders are equipped with hydraulic "claws" that can be used to hold and manipulate a variety of objects.

The Colonial Marines (as well as other groups, including the Iron Bears) also utilized the Exosuit, the military version of the P-5000.[3] Perhaps the most famous use of a Power Loader was when Ellen Ripley used one in a ferocious hand-to-hand battle with a Xenomorph Queen aboard the USS Sulaco.

The basic Power Loader design was patented by Weyland Corp on January 29, 2025.[4] While initial models were manufactured by Weyland Corp themselves, later commercial versions would be built by Caterpillar Inc.

Configured as an anthropomorphic exoskeleton power frame, the P-5000 offers unprecedented flexibility when handling ordnance and cargo during rough field operations. It also serves as a platform for conducting heavy maintenance away from fixed workshops. The Power Loader is able to multiply a human operator's strength and lifting capacity several thousand times[5] and is capable of manipulating loads up to 4,000 kg.[1] The P-5000 is a rugged and reliable alternative to conventional forklifts, rigs and cranes.

The chassis of the P-5000 consists of a reinforced steel framework with two upper load-bearing points for the arms. A hydrogen fuel cell is mounted on the back of the frame, providing up to 65 kW of power for the loader.[6] The articulated legs are attached by two semi-universal bearings on either side of the base of the chassis, allowing up to 60 degrees of 'x' axis (hip swivel) movement; just below these are a set of knee bearings. Leg motions at the hip are controlled by a pair of 20 kW linear motors actuated via a fast-feedback loop slaved to the operator's movements. Below the hip, hydraulic actuators extend from the main load-bearing points to the aft sections of the legs, providing 'z' axis (fore/aft) movement at the knee joints while pitch control is handled by a second series of actuators at the ankles. To prevent toppling while stationary and under load, the chassis is gyrostabilized.[6] These gyros can be rotated rapidly out of phase in order to 'decouple' the chassis stabilization system along the determined axes of motion and provide the necessary instability required for bipedal movement. For very heavy lifting work, additional stability can be provided by bolting up to 250 kg of concrete ballast to the underside of the chassis.[7]

The loader's arms are attached to the very top of the chassis by a pair of complex universal bearings stressed to operate under loadings of up to 4,000 kg.[7] Arm motions in the 'y' and 'z' axes are controlled by linear motors while movement in the 'x' axis and at the elbows is powered by a series of hydraulic actuators. The limbs mount a set of vise manipulators that are capable of full 360° rotation. Most common industrial storage mediums are fitted with uniform, purpose-made grips that can easily interface with the P-5000's claws. Typically, one jaw of each vise is placed under the object to be lifted while the other jaw clamps down on top of the object, holding it firmly and securely.[2] Manipulator function is controlled from an operator handgrip/joystick combination situated on the inside of each limb. Attachment points for additional tools (such as cutters and welders) are located on the manipulators.[7]

To work a Power Loader, an operator first backs into the machine, buckling themselves in with the webbing harness. A roll cage is pulled down to provide protection for the head and torso, while feet are secured with straps. Powerup and system diagnostics are handled by a punch keypad built into the operator's handgrips. This keypad also controls any additional external tools fitted to the machine.[2]

When powered up, the P-5000 is slaved to the operator's limb movements, duplicating their walking and lifting motions almost exactly. Response time to operator input is almost instantaneous, while sophisticated computer controls dampen any system induced 'twitches' or oscillations that arise out of involuntary operator movement.[7] Problems are only likely to arise if the loader is walking or reaching at full extension, as the system is likely to enhance movement beyond the fine-tuning capabilities of the operator; standard operating procedures typically forbid operators from performing such maneuvers.

If operating over rough ground, the Power Loader will provide feedback cues to the operator to help them keep his or her footing.[7] However, owing to the P-5000's high lifting capacity and relatively small foot area, operations with very heavy loads on soft ground are not recommended, as the extreme downward pressure generated underfoot can cause the unit to literally bury itself in the ground.[7] Automatic lockout systems will generally prevent any movement that will topple the loader, and the system has generally proved safe to use over all but the most treacherous terrain. As with any lifting device, there are strict guidelines regarding weight limits that the loader can handle.

Though simple in principle, considerable practice is required to use a Power Loader efficiently and safely, and the equivalent of a Class 2 civilian cargo handling license is needed to operate one in USCM service.[7] Operators must become used to the loader's mass and its tendency to 'lead' the operator's movements. Operators must be careful not to overcompensate for this tendency, otherwise they may induce unwanted oscillations into the control systems. Operating a P-5000 requires sureness and economy of movement, since hesitancy and exaggerated motion tend to place undue stress on the load-bearing joints. Training to use a Power Loader takes about six weeks of simulator training and 'hands-on' experience, though this is extended to eight weeks to qualify USCM personnel and includes training in rough field operation.[7]

"Since introduction, the power loader has improved workplace safety by 300% in off-world applications. Its low alloy steel exoskeleton is designed to withstand maximum compression stress, keeping the driver safe from external blows. Hydraulically stabilized legs give 3 tons of load-lifting ability."[8]

The Power Loader in Aliens was originally to be a four-legged machine, but when The Empire Strikes Back was released in 1980, James Cameron decided it would be too similar to that film's AT-AT walkers and modified it to be bipedal in form.[9] The quadruped rendition notably appears in the film's novelization.[10] Cameron discussed the look of the anthropomorphic Power Loader with production designer Syd Mead (whose work had ironically inspired the AT-ATs in Star Wars), and Mead came up with some concept drawings. While the design ultimately used in the film was Cameron's own, Mead's work later seemingly inspired the "Amplified Mobility Platform" in Cameron's 2009 film Avatar.

The Power Loader in the film was a full-scale prop constructed around stuntman John Lees, who was concealed inside, immediately behind Sigourney Weaver.[11] Constructed from aluminum, fiberglass and PVC plastic, the finished machine weighed around 600 lbs and included hidden counterweights disguised as machine components to help balance it.[9] Even so, owing to the suit's weight and bulk, it had to be either suspended from wires (concealed within the radio antennae on the suit's shoulders) or mounted on a counterbalanced crane for filming.[11] It featured electrically operated claws, although the various hydraulic systems on the arms and legs were cosmetic only. The tandem design allowed Sigourney Weaver to be in the operator's seat at all times, while Lees controlled the suit from within.

Additionally, a scale miniature was built for some shots, including wide shots during the fight with the Queen and the scene where the suit is ejected into space, for which the camera was hung vertically and the suit was dropped away onto a safety net painted to resemble space.[11] Originally, Cameron had wanted to use stop motion for these wide shots, but budget constraints would not allow for it and rod puppets were used instead.[12] The miniature's legs were controlled by rods inserted through the set from below, while its arms were cable-operated.[9] The scale model required five puppeteers to operate, two on each arm and a fifth controlling the body.[13] A small doll of Ripley was placed in the operator's seat. For the scene where Ripley demonstrates her prowess with the Power Loader to Apone and Hicks, a second unit is visible passing by in the background, ostensibly piloted by Spunkmeyer — however, the machine's driver is in fact the Ripley doll dressed in military fatigues.[9]

A new weaponized version of the Power Loader was set to appear in Aliens: Colonial Marines and was featured in the E3 demonstration of the game; it was essentially a standard P-5000 outfitted with an M56 Smartgun fitted to one arm and an M240 Incinerator Unit on the other. However, it was cut from the final product. Although not specified, it seems likely this exoskeleton was not supposed to be purpose-built military equipment, but merely an ad hoc combat exosuit constructed by the Marines from existing commercial equipment and their own weaponry. While the weaponized version was cut, the standard Power Loader did appear in the final game, and was fitted with a M314 Motion Tracker attached to the roll cage with what appears to just be zip ties.

Ellen Ripley prepares for battle against the Queen.

Christopher Winter battling the Raven in a Power Loader. Also note Bella in the background.

A Power Loader from Aliens: Colonial Marines. Note the lack of Motion Tracker seen in the final game. 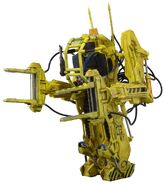 NECA figure of a Powerloader.

Hot Toys figure of Ripley and a Power Loader. 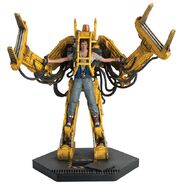 Eaglemoss Collections figurine of Ripley in a Power Loader. 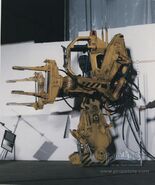 The full size Power Loader from Aliens on standby during the production of the film.[17]

Behind the scenes photo of James Cameron demonstrating the Power Loader for Sigourney Weaver on set.

Rare insight to the making of a Power Loader.