Yautja procurement and research
The Other Worldly Life Forms Program[1] (OWLF) was a top-secret CIA[2] program tasked with investigating Yautja incursions on Earth. One of its key aims was the live capture of a Yautja specimen for study. Specifically, the OWLF hoped to gain access to the Yautja's advanced technology and weaponry.

The group first appeared in Central America in 1987, following Alan "Dutch" Schaefer's encounter with the Jungle Hunter in Guatemala. A team led by Peter Keyes tracked Dutch to a hospital where he was being treated for apparent radiation sickness, and from him learned what had happened in the jungle.[3] A research squad was sent into Guatemala to investigate further, discovering the site where the Jungle Hunter had detonated its Self-Destruct Device, as well as evidence of a spaceship launch — unknown to the team, the Jungle Hunter's ship had automatically returned to Yautja Prime upon its owner's death.[3] Dutch later disappeared, and the Guatemala operation was closed down with frustratingly little hard evidence gathered.

In 1997, another OWLF team, again under the command of Keyes, arrived in Los Angeles intending to capture the City Hunter, which was stalking and killing the city's heavily armed gangs. As a result, the team crossed paths with LAPD detective Lieutenant Mike Harrigan, who was investigating the ongoing drug war between the Colombian Scorpions and the Jamaican Voodoo Posse. To conceal their true goals, Keyes and the OWLF unit posed as an elite DEA taskforce investigating the international drug trade in Los Angeles, but Harrigan soon came to suspect they had a secret agenda.

The OWLF finally tracked the City Hunter to a slaughterhouse in the warehouse district where it would feed on raw meat. They developed a plan to capture the creature using liquid nitrogren cannons and temperature-camouflaging suits, but the mission ended in failure and resulted in the deaths of several operatives, including Keyes. Afterwards, Agent Garber assumed command. However, Garber and the other remaining members of the team were subsequently forced to flee the city in the face of arriving police backup. 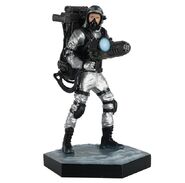