"Time to let Old Painless out the bag."
"Payback time."
―Mac and Blain (from Predator)

Blain
"Old Painless"[1] was the handheld M134 Minigun used by Blain Cooper, specifically when he hired was for a rescue mission in Guatemala in 1987. During the attack on the guerrilla's camp, Blain used the weapon to great effect, taking out several of the Guatemalan rebels.

After the M134's ammunition supply was expended by Mac Eliot in an attempt to kill the Jungle Hunter, who had killed Blain, it was presumably abandoned in Guatemala.

"Come on in, you fuckers, come on in. Old Painless is waiting."
―Blain (from Predator)

The M134 was used by Blain Cooper in the 1980s. It was nicknamed "Old Painless" by Alan "Dutch" Schaefer's private military team. In 1987, Blain, along with the rest of Dutch's private military team, was hired by the United States Army and the Central Intelligence Agency for a rescue mission in Guatemala. Blain brought Old Painless on the mission, although he initially just carried the weapon in a bag, using a Heckler & Koch MP5A3 instead. After the team discovered the skinned corpses of Jim Hopper an his team, who were killed by the Jungle Hunter, Blain readied Old Painless for "payback", believing the guerrillas were responsible. When the team later attacked the guerrillas' camp, Blain used Painless to great affect, taking out several guerrillas, including one in a tree.

Following the assault on the camp, Rick Hawkins was killed by the Jungle Hunter. While searching for the corpse, Blain was shot and killed by the Jungle Hunter, dropping Painless. Blain's friend, Mac Eliot, rushed to the scene and saw the cloaked Predator flashing its "eyes". Mac began firing at the creature with his M60E3, wounding it, and then picked up Painless and continued to blindly fire. Although the Jungle Hunter immediately fled, Mac continued firing, even after Dutch, Jorge "Poncho" Ramirez, Billy Sole and Al Dillon joined him and began firing blindly into the jungle. However, Mac soon expended the Minigun's ammunition, rendering it essentially useless. The Minigun was then presumably abandoned in Guatemala.

Old Painless, which, like the rest of the weapons in Predator, was supplied by Stembridge Gun Rentals, was custom-built for the film (while rumors persist that a handheld Minigun system was tested by the US Navy SEALs in Vietnam, no such weapon ever entered production).[2] The weapon was fitted with the handguard assembly from a full-size M60 machine gun (a short-barrelled variant of which was also used in the film by Mac), installed backwards under the M134's barrels, as well as a rear pistol grip taken from normal (at the time) Minigun spade grips, attached to the weapon via a custom Y-frame with an M16-style carry handle that mounts to the weapon's recoil absorbers.[3] A special harness was also created, transferring much of the weapon's considerable weight to actor Jesse Ventura's (Blain) shoulders.[2] Additionally, the weapon had its fire rate drastically reduced from 6,000 RPM to 1,250 RPM, partly to make the recoil manageable for Ventura, partly to conserve ammunition (even at the reduced rate, the ammo canister linked to the gun could only hold 4-6 seconds of usable ammunition), and also to make the weapon's rotating barrels visible on-screen (at the full rate of fire, the barrels appeared to be stationary blur on screen as they would spin faster than the frame rate on the cameras).[4] The M134 also requires a significant amount of electrical power to operate; in the film this power source was external, consisting of cables that plugged into the Minigun and lead down Ventura's pants leg and along the ground to off-screen batteries. These were only attached for shots where the weapon is fired as the actor could not walk when they were installed.

The ammo pack for the weapon used an M23 armament system ammo box and cover assembly attached to an ALICE pack frame. These ammunition canisters hold approximately 550 rounds of 7.62×51mm ammunition when filled; at the confirmed rate of fire (1,250 RPM) when the weapon was sold, the Minigun actually had a maximum of 25 seconds of ammo. For scenes where the Minigun is fired, the box is oriented correctly across Ventura's back, with the feed chute attaching to the upper left corner of the box and oriented on the weapon so that the window is facing upward. During non-firing scenes, the ammo box is instead positioned up and down, with the chute turned upside down to hide the fact that there is no ammunition within.[3]

The film's technical adviser, Kevin Dockery, had the following to say regarding the weapon's caliber:

"The Predator gun is an M-134. It was never a Microgun (XM-214). That story has been rattling around the Internet and elsewhere for years, that the Predator gun was a 5.56, it wasn't. Ventura had a hand in putting together the harness that held the gun, after all, he had to carry and handle the darn thing, and told me a bunch about it. When Dan had the gun (past tense I believe) he contacted me to see if Ventura wanted to buy the weapon. I'm going to do a writeup on the XM-214 including pictures of me holding one. It isn't a big deal to pick the microgun up and hold it cradled in one arm. Maybe when people see just how small the 5.56mm gun is, this story will start going away. The pack in the movie held all of four seconds worth of ammo and no batteries. In the first scene when Ventura fires the gun, you can see the cable for it in the dirt behind him. And the trigger didn't work. The special effects man handled powering the gun for several reasons, including safety. Something about them not wanting the actors injured if the gun was dropped and the trigger pulled."
―Kevin Dockery[5][3]

Ventura himself described firing the weapon as "like shooting a chainsaw",[1] no doubt referring to its ability to chop down an entire swath of rainforest (even if this was achieved with special effects explosives rather than actual live gunfire). Bill Duke (Mac) said, "Shooting those many bullets coming through that gun with that power is an amazing experience."[1]

One of the prop makers who worked on the film later gave some of the Minigun's original parts to RPF member "eltee", who made a replica of the Minigun.[6]

Despite being one of the most memorable aspects of Predator, in reality the concept of a handheld Minigun is completely unrealistic. As much is obvious from the filming of the movie — the weapon's rate of fire had to be drastically reduced simply to make it manageable for the user, even when dealing with blanks that produce less recoil than live rounds, and it is simply impossible for a man to carry enough ammunition to give anything like a reasonable duration of firing. Furthermore, when factoring in the additional weight of batteries that would need to be carried, the weapon becomes even less practical (although with more advanced battery technologies available, this would be less of an issue today than in 1987). As actor Shane Black put it, "It makes no sense outside the context of a film that someone would have this Gatling gun, which fires a billion rounds a second, and they'd have to carry all the ammo on their back and it's good for maybe two shots and then you'd have to drop it... But it looked cool!"[1]

As a result of its far-fetched nature, Old Painless is beset by continuity and factual mistakes in the film. Most notably, when Mac opens up with the weapon on the Jungle Hunter, he fires continuously for almost a minute; not only would it by physically impossible for a man to carry the requisite amount of ammunition for such a long period of firing, even at the reduced rate of fire the gun had in the film, but there should also be thousands of empty shell casings lying on the floor afterwards. The ammunition box attached to the Minigun is also nowhere near large enough to contain sufficient ammo for what is shown in the scene. The weapon is obviously not linked to the necessary electrical power source most of the time, and in some of the scenes where it is fired, the cables that attach to such a power source off-screen can actually be seen trailing across the floor away from the actor's feet.

An additional mistake occurs as soon as the weapon is introduced — when Blain breaks out the M134, he "cocks" the weapon by twisting the barrels left and right. In reality, doing so would fire off any chambered rounds.

Use in Terminator 2: Judgement Day

Stembridge Gun Rentals later supplied the weapons used in the 1991 film Terminator 2: Judgement Day (directed by Aliens director James Cameron). As a result, the same M134 used in Predator was reused in the film, most notably in the scene where the Terminator (played by Dutch Schaefer actor Arnold Schwarzenegger) fires at the Los Angeles Police Department from the Cyberdyne Systems building. For this appearance, the weapon was slightly modified from its original form — the underslung M60 foregrip was removed and the carry handle on top was cut off, with a chainsaw-style grip installed in its place. Remnants of the original carry handle are still visible on the wepaon.[6] This chainsaw grip set-up has since become something of a standard for handheld Miniguns, and is by far the most common layout seen with such weapons.

Since the release of Predator, the concept of a handheld Minigun has become something of an iconic pop culture symbol with regards to the action genre. Such a weapon is a staple of first and third-person shooter video games, and handheld Miniguns have also gone on to appear in numerous other films, including Soldier, Resident Evil: Apocalypse, Predators, The Expendables 3, Captain America: The Winter Soldier and the seventh entry of the Fast & Furious franchise, as well as the aforementioned Terminator 2: Judgement Day. However, it typically appears in the more popular configuration with "chainsaw grip" seen in Terminator 2.

Ventura with the Minigun.[2] 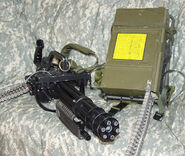