"He took up a position here. Shooting in all directions. This was a last stand."
―Nikolai (from Predators)

Killed a Super Predator in a suicidal explosion

Nikolai Mikhalovich Fedorov[3] (Николай Миха́йлович Фёдоров) was a soldier in Russian Spetsnaz special forces who was kidnapped by the Super Predators and taken to the Game Preserve Planet in 2010. Together with the others dropped on the planet at that time, he attempted to find a way to escape and return to Earth.

Nikolai died when he blew himself up inside the abandoned alien drill in an attempt to kill Tracker, who had caught and mortally wounded him.

Nikolai was a Spetsnaz (Russian Special Forces) operative who was fighting in the Second Chechen War before being abducted and dropped on the hunting reserve. He was married and had two sons.

Nikolai was dropped along with Royce, Cuchillo, Isabelle, Edwin, Mombasa, Hanzo and Stans to be hunted by the Super Predators. During the time on the planet, Edwin stops him from touching a highly venomous plant, at which point nearly paralyzed him if Edwin hadn't stopped him.

Nikolai starts looking after the apparently weak and defenseless doctor. When the group happen upon the Predators' camp and Royce tries to catch the Super Predators off guard by using the group as bait, Nikolai is one of only three people who stays to try and fight the Predators, the others being Hanzo and Royce. During the fight, one of the Super Predators shoots his Minigun, destroying it, and forcing him to flee from the camp with the others.

Afterwards, the group meets Noland, a man who shot and killed the River Ghost had also lived for years on the preserve, hiding from the Predators. After leading the group to his hideout Nikolai shows Edwin a picture of his kids (which Edwin keeps and uses later). After escaping from the room the group runs through the remains of the ship, Edwin accidentally ends up in a different hallway from the others and begs Nikolai to help him, but Nikolai seemingly leaves Edwin to his fate. However, just before the Tracker kills Edwin, Nikolai comes back to rescue him and fires at the Super Predator with his Tokarev TT-33.

Nikolai then leads Edwin to the rest of the group but is shot in the back by a Plasmacaster and falls to the ground, still alive, while Edwin leaves him to the Super Predator. The Tracker Predator then slowly walks toward the injured soldier as he struggles to drag himself away, stabs Nikolai in the stomach with its wrist blade and lifts him up. Nikolai spits his blood in its face before pulling his vest strip off, revealing several armed M18A1 Claymores, saying his final words in a variation of "You're one ugly motherfucker" in Russian, as he detonates the explosives, killing himself and the Tracker in the explosion.

Like Blain Cooper, Nikolai's weapon of choice was an M134 Minigun, although his featured a tan chainsaw-style grip; ammunition for his Minigun was stored in Nikolai's backpack. After the Minigun was destroyed by a Super Predator, Nikolai switched to the Tokarev TT-33 he was keeping as his sidearm. He later acquired at least two Claymore mines from Noland's stockpile.

He wore various webbing for his weapons accessories and wore early 2000s Russian-style camouflage. He also wore a Russian blue-striped sailors shirt, a common attire for elite Spetnaz and Naval Infantry units in the Russian Army.

During the hunt, Fedorov showed a more caring side than any other human on the planet, except Isabelle, seen in his concern of Edwin and apparent remorse for leaving Cuchillo behind. He was willing to put himself in danger for the sake of others more often than the rest his comrades on the alien planet, again except Isabelle; even then he helped Edwin when even Isabelle would not, eventually making the ultimate sacrifice to save his comrades from the Tracker Predator.

When Noland tells him and the others how the Predators behave, he understands by saying, "They're training to be better killers." These qualities may be due to the fact that he is one of the only professional soldiers on the planet and the fact he is a father. His relationship with his family is unknown; he appears to care greatly for his family but believe they deserve better than him, and wanted to die on the planet, but also wanted them to know he was sorry. Nikolai mumbled to himself on a few occasions throughout his ordeal.[4]

Actor Oleg Taktarov described Nikolai as a combination of Dutch, Mac and Blain.[5]

Nikolai's M134 Minigun was substituting for a GShG-7.62, or a Slostin machine gun that is described in the script. The M134 was presumably chosen as an homage to Predator, where Blain also carried the Minigun, albeit in a different configuration.

The Minigun's power supply appears to be stored in the actor's backpack. There is a brief scene in the Predator camp where the actor fires the gun while walking and the power cables can be seen leading from the gun and into the backpack.[6]

Nikolai with his minigun.

The Tracker impaling Nikolai, just before Nikolai detonates the Claymore mine strapped to his chest. 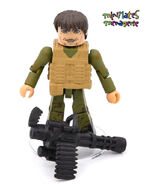 Minimates figure of Nikolai.
Add a photo to this gallery

Retrieved from "https://avp.fandom.com/wiki/Nikolai_Fedorov?oldid=256569"
Community content is available under CC-BY-SA unless otherwise noted.