watch 01:29
Wiki Targeted (Entertainment)
Do you like this video?
Play Sound

7'-8'
The Nightstorm Predator, also known as "Scarab Predator", was a Yautja who appeared in Series 10 of NECA's Predator line of action figures. He was heavily inspired by classic Kenner, a toy company who produced many Alien and Predator products for children in the some early 1980s and '90s.

Not very much is known about the Nightstorm Predator besides the fact that he was an Elder Yautja in Egypt. He lived 4,000 years ago and was also the first Yautja who went rogue and turns into Bad Blood, disapproving of the Yautja's Code of Honor. Nightstorm went on to become the very first Super Predator from his species.

Nightstorm possessed switchblade-like Wrist blades, a customized Combistick, a Plasmacaster, golden armor and a golden anubis looking bio-helmet. Notably, his bio-helmet had holes on each side to expose his mandibles, giving him a very intimidating and malice appearance. 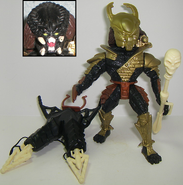 Minimates figure of Nightstorm.
Add a photo to this gallery
Retrieved from "https://avp.fandom.com/wiki/Nightstorm?oldid=268954"
Community content is available under CC-BY-SA unless otherwise noted.