Xenopedia
Register
Don't have an account?
Sign In
Advertisement
in: Weapons and technology of the Hunt, Predator 2 weapons, Alien vs. Predator (film) weapons, Launchers

Yautja
The Netgun[1], also known as the Net Launcher,[2] is a Yautja weapon that fires a wire net at great velocity and with great force, typically to trap and ensnare prey. Once fired, the net itself has the ability to tighten around its trapped target with sufficient force to cause the wire mesh to cut into the victim.[3]

The Netgun itself is a small, handheld device. It fires a bundled net that rapidly expands as it leaves the weapon's barrel.[3] The net itself travels at great speed, capable of hurling a target across the room upon contact, ideally pinning them to a nearby surface. Once pinned, the prey is then an easy target for the Predator; one common tactic used by juveniles is to pin their target with their Netgun before using their Speargun to kill them.

The metallic net itself also acts as a weapon — once attached to a surface or wrapped around a target it will automatically tighten, carving into the flesh of anything caught inside, causing grievous if non-fatal wounds. The net is essentially impossible to cut with readily available equipment, although the Yautja Smart Disc is known to be able to slice a net open.[3] They are also not impervious to Xenomorph blood as with many other Yautja weapons, and so are ineffective at trapping the creatures, although they may still be used to temporarily restrain Xenomorphs during heated confrontations.[4]

It is not clear how a Predator reloads his Netgun, although it seems likely that some form of cartridge mechanism is used, as manually reloading a net would be both difficult and time-consuming, and a cartridge reload would also provide a fresh net should one be damaged or destroyed during use. When not in use the Netgun is usually stored on the Yautja's leg armor.

Foam-filled latex Netgun from Predator 2 for use in dangerous scenes where a hard version could cause injury. Has much simpler details and paintwork than the hard versions, includes three lines of velcro for attaching to the leg armour of a suit.[6]

A Netgun in Aliens versus Predator 2. 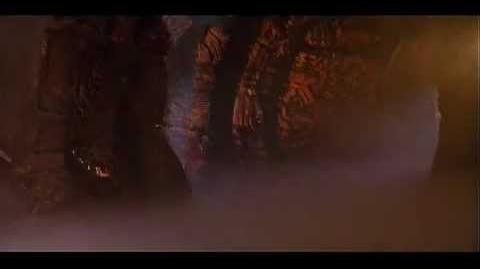 The Making of Predator 2 - Weapons Of Choice - Net Launcher EQ
A behind the scenes video of the Netgun seen in Predator 2.