Xenopedia
Register
Don't have an account?
Sign In
Advertisement
in: Creatures, Alien: Covenant characters, Aliens featured in the movies,
and 4 more
English

View source
watch 00:37
Alien: Covenant - What are the Neomorphs?
Do you like this video?
Play Sound

The Neomorph was an endoparasitoid extraterrestrial species encountered by the crew of the USCSS Covenant. While they share some characteristics with the Xenomorph XX121, most notably their process of gestating inside a living host organism and their elongated heads, they are otherwise quite different.

Two of the creatures were encountered by the crew of the Covenant after landing on the planet where David conducted his biological experiments.

The Neomorphs were the result of the local ecosystem on the planet to which David traveled after leaving LV-223 becoming altered by the black liquid. Specifically, the liquid caused small, black, spherical, fungus-like egg sacs to form on the ground. When disturbed, these egg sacks would release a cloud of microscopic insect-like spores (motes) into the air that would then enter a host organism through any open orifice — such as the nostrils or ear canal. Once a host is infected with the airborne contagion, the spores would enter the bloodstream and proceed to cause a Bloodburster to grow inside of them until they violently puncture the skin and claw their way out of the host's body. This process is notably similar to the Xenomorph Chestburster, although the exact point of emergence varies depending on how the host was infected. As with Xenomorphs, the appearance and characteristics of the Neomorph depend on what sort of animal it was spawned from. Unlike the Xenomorphs, Neomorphs are more organic in appearance and lack biomechanical aspects.

When spawned from a human host, the creature is born with arms and legs and initially moves in a quadrupedal manner, reminiscent of a Runner, but as they grow, the Neomorph adopts a bipedal stance. Notably, the creature is born with a bulbous head but as it grows its head grows more elongated and pointy. The creature has pale, white-grey skin with a somewhat translucent appearance, attributes that resemble those of a Hammerpede. The Neomorph features a fleshy tail tipped with spikes, which can be used as a devastating slashing and battering weapon, and a large number of silvery fangs in their mouth, which appears circular when closed. Notably, individual Neomorphs appear to display physical variance. For instance, one of the creatures featured a pair of sharp, bony dorsal spikes on their back that assisted them in breaking out of their host, whereas the other individual encountered lacked these features. Their blood is thick and yellow in color, but notably not acidic.

In terms of behavior, the Neomorph is far more feral and animalistic than a typical Xenomorph, to the point that even their newborn form is highly aggressive and will attack anyone on sight. As such, they are less intelligent than their Xenomorph counterparts.[3] However, they have been seen to be capable of stealth, as the Neomorph that killed Rosie snuck up on her and did nothing until she turned around, which it then regarded her for a moment before suddenly killing her. Whether this was deliberate, or just the creature being morbidly curious is debatable. Regardless, they have been known to adopt deliberate stealth tactics.[4] Neomorphs are notably seen consuming the flesh of humans they have killed, whilst Xenomorphs have not been depicted doing this (except for the possible instance where a xenomorph killed and dragged a teenager and repeatedly stabbed with it's inner jaw in Alien vs Predator: Requiem). It's possible that xenomorphs don't require meat like the Neomorphs.

As dangerously aggressive as they are, they are frequently seen to attack their preys to feed, indicating that they need to consume flesh often to survive, unlike Xenomorphs.

Unlike a typical Xenomorph, Neomorphs do not possess an extendable Inner jaw which can be used to attack, instead, their "gums" extend out in a manner similar to the Deacon. Also, while the teeth of a Xenomorph's outer jaws are usually visible, a Neomorph's jawline is almost invisible when closed.

According to David, the Engineer's black liquid mutagen was intended to create hybrid creatures like the Neomorph that would instinctively hunt down and kill all non-botanical, animal life in an ecosystem - "the meat". Notably, when one Neomorph encountered David, it apparently recognized that he was a synthetic android - and thus instead of attacking him, simply stood still and regarded him -- although a Neomorph had previously bitten off Walter's arm when he attacked it. Xenomorphs, in contrast, have been observed attacking synthetics - possibly another example of their greater intelligence compared to Neomorphs, whose behavior seems to be based more on animal instinct.

The initial stage in the Neomorphs' life cycle is the egg sack, a fungal-like growth found in clusters throughout Planet 4 as a result of their contamination with the mutagenic Chemical A0-3959X.91 – 15 pathogen.

If and when the Egg Sac is damaged or otherwise disturbed by a potential host, they release a cluster of spore-like motes that conglomerate into an airborne mass. The motes possess a rudimentary hive intelligence and infect the nearest viable host organism through an orifice such as an auditory canal or nostril. The motes themselves are extremely small in appearance, no larger than a grain of sand, though they can still be vaguely visible when clustered together. They appear to be extremely tiny parasitic insects when viewed under a microscope.[5]

Once inside a host organism, the motes burrow into their body, extend an ovipositor, and inject Agent A0-3959X.91 – 15 into a hosts bloodstream.[6]The pathogen re-writes the DNA of the host and instigates the growth of a small tumor within a vein or arterial wall, within which the larval 'Bloodburster' rapidly gestates in a matter of hours, before violently emerging and killing the host organism. If the amniotic sac is located in a difficult-to-emerge-from location, the Bloodburster can use the sharp dorsal spines and pointed head to pierce and rip through flesh and bone. They are notably hostile towards other organisms upon birth, and will attack anything deemed a threat.

A Bloodburster will soon grow into a juvenile Neomorph, known as a Neophyte,[7] within a matter of hours. Voracious carnivores, they grow from 1.2-1.8 metres tall,[8] and are just as aggressive and tenacious as their adult counterparts.

Eventually, the Neophyte will reach full maturity, reaching a rough height of 2.1 metres or more. A Bloodburster's bulbous head will since have grown into a fully elongated, pointed shape and adopt a bipedal stance.

Unlike Xenos, Neomorphs have an incredibly short lifespan, and they typically die within 24 hours of their birth.[9] Fungus that interacts with the corpse of a Neomorph will be transformed into new Egg Sacks, restarting the cycle.[10]

Following David's attack on the Engineer settlement with the Chemical A0-3959X.91 – 15 pathogen, the Neomorphs were one of the hybridized parasitic organisms to arise from the mutagen contaminating the planet's ecosystem. David's laboratory in the lower levels of the Engineer temple contains specimens of each stage of the Neomorphs' life cycle; and several immature and embryonic Neomorph specimens, the failed results of his biogenetic experiments to create the perfect organism.

Two members of the Covenant's security detail, Ledward, and Hallett, were infected by the spores, Ledward through his ear and Hallett through his nose. Both men were killed when the creatures emerged from them; the infant inside Ledward ripped out of the man's back while he was being treated aboard the Covenant's dropship, while the infant Neomorph inside Hallett erupted from the man's mouth. The Neomorph spawned from Ledward attacked and heavily mauled Karine before attacking Faris, escaping when the latter accidentally destroyed the dropship in an attempt to kill it. Both Neomorphs ran off into the night, while the surviving crew members were left stranded in the wheat field.

Soon afterward, the two Neomorphs returned attacked the crew. When one of the Neomorphs leaped at Daniels, Walter tackled the creature, before having his hand bitten off. The creature then struck Walter with its tail, throwing him aside before redirecting its attention to the rest of the crew. The security officers attempted to shoot the creature dead, but this only angered it, causing it to lash out and strike Ankor with its tail, mutilating his face and killing him. It then attacked Daniels before being shot dead by Rosie. Seconds later, the second Neomorph appeared and attacked Rosie, taking her to the ground. The Neomorph nearly mauled her to death, but she was saved when David fired a flare gun into the air, scaring it off.

The second creature survived to maturity, infiltrating David's temple and killing Rosie by tearing off her head with its jaws. The Neomorph was discovered feeding on her corpse by David, who attempted to communicate with and tame it. Chris Oram arrived moments later. Against David's wishes, an enraged Oram shot the creature dead.

Following the destruction of the UPP-owned Rodina Station after a presumed outbreak, scouts managed to acquire remnants of Plagiarus praepotens cells, resulting in the formation of lab sites across the UA border and Borderline Region under the 'Darkstar Program', headed by the Ministry of Space Security. Scientists eventually managed to reconstruct the damaged chromosomes into a Neomorphic genome, successfully conjuring Neomorph specimens.[11] The UPP have since preferred producing these 'Heomopfs' over the traditional Xenomorph XX121, as their extremely short lifespan proved a viable and controllable bioweapon, albeit with the troubling catch of a Neomorph corpse producing hazardous Egg sacks.[12]

The name "Neomorph" was first accidentally revealed by actor Michael Fassbender in an interview with Mark Goodier on BBC Radio 2, broadcast on October 20, 2016.[13] Four days later, AvPGalaxy published an exclusive article revealing more about the creatures. The creature has been described by the production crew as a new, "natural" variation of the Xenomorph.[14] The Neomorph's physical appearance has been noted as being similar to the Beluga-Xenomorph from the early Prometheus script Alien: Engineers.[14] Moreover, the means by which hosts are infected through airborne contagion bears notable similarities to aspects of William Gibson's unproduced script for Alien3, in which the regular Xenomorph develops an ability to procreate via an airborne form.

The motion-capture performance for the Neomorphs was provided by Javier Botet, a Spanish actor with Marfan syndrome who is known for his roles in horror films such as Rec (2007) and Mama (2013). He also provided motion capture for Praetomorph.[15] 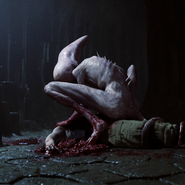 A Neomorph feeding on Rosie's corpse. 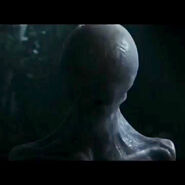 Neomorph before opening its mouth to attack.

A Neophyte in the grass.

A Neophyte attacking a crew member.

A Neophyte biting into Walter's arm. 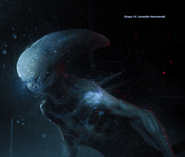 An image of a Neophyte from Alien: The Roleplaying Game.

A swarm of Neomorphs attacking a group of humans at an Engineer site, from the Colonial Marines Operations Manual.

Concept art of a Neophyte by Colin Shulver.

Concept art of the Neomorph by Colin Shulver. 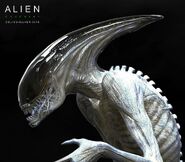 Concept art of the Neomorph by Carlos Huante. Notice the great resemblance to a Goblin-Shark. 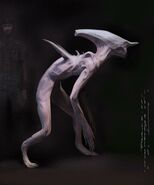 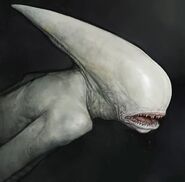 Concept art of the Neomorph by Rob Bliss. 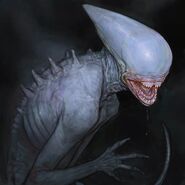 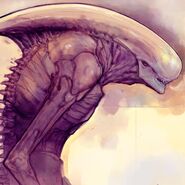 Concept art of an adult Neomorph by Khang Le.[18]

Concept art of a group of Neomorphs. 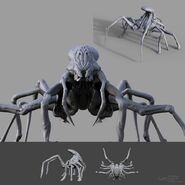 Concept art of a Trilobite-looking Neomorph.

Original sketch of the Neomorph by Tristan Jones.

NECA figure of the Neomorph, (alongside a bloodburster). 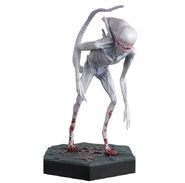 Eaglemoss Collections figurine of a Neomorph. 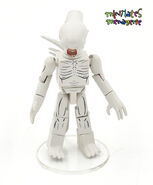 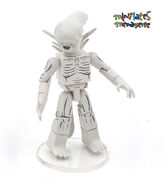 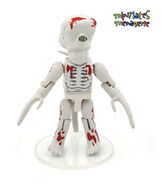 Alien and Predator Classics figure of the Neomorph, alongside an infant. 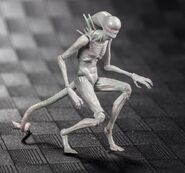 Hiya Toys figure of the Neomorph.

Pop! Vinyl figure of a Neomorph and toddler.