"I say that we abandon this ship! We take the shuttle and just get the hell out of here!"
―Lambert, to Ripley and Parker (from Alien)

The Narcissus[2] was a modified Lockmart Starcub light shuttle[2] that served as one of two lifeboats[3] aboard the Weyland-Yutani commercial hauler USCSS Nostromo. Warrant Officer Ellen Ripley used the Narcissus to escape the destruction of its parent vessel in 2122, along with the ship's cat Jones.

The Narcissus weighed 48 metric tonnes. Its hull, measuring 16.3 meters in length, 19.7 meters wide and 7.5 meters in height, was constructed of conventional composite construction, with a ceramic and composite outer skin.[2] The single internal cabin offered 108 cubic meters of space, including numerous lockers and storage space for supplies and equipment. The shuttle was also equipped with a folding tricycle undercarriage, allowing it to set down on planetary bodies if required.[2]

As standard, the Narcissus was designed to carry a crew of three, including a pilot, co-pilot and science officer, although the interior could be easily modified to seat more crew members if necessary. For long duration travel, the shuttle contains two hypersleep capsules, although long-range interstellar transit is not the vessel's primary purpose.[2] When not in use, the Narcissus was stored in a docking module on the underside of the Nostromo adjacent to the ship's port engine nacelle; her sister shuttle, the Salmacis, was stored in the same position on the starboard side.[3]

The Narcissus is powered by a 9gW microfusion reactor that drives two Newington A-24 rocket motors. These engines employ water as the reaction mass. Engine thrust can be variably vectored through two forward or four rearward thrust tunnels,[2] allowing the shuttle to move with equal speed in either direction; indeed, the Narcissus was designed to evacuate the Nostromo in reverse when used as an emergency escape vehicle.[4]

For interstellar travel, a Romberg 100C tachyon shunt can propel the Narcissus at low faster-than-light speeds. Fully fueled, the vessel has a range of 13 parsecs.[2]

When Ellen Ripley detonated the Nostromo's engines to destroy the ship and the Alien on board, she used the Narcissus to escape the blast zone. However, unknown to her the Alien had stowed away on board the shuttle as well, and she was confronted by the creature as she prepared to enter hypersleep. Ripley ultimately killed the Xenomorph when she opened the airlock, almost sucking it out into space, before shooting it with a harpoon gun (which ended up jammed in the ship's airlock door) and incinerating it in the shuttle's main rear engine outlets. With the creature destroyed, Ripley and Jones set a course for the frontier and went into hypersleep.

Unknown to Ripley, Ash had surreptitiously uploaded his AI consciousness to the Narcissus' mainframe before his physical body had been destroyed aboard the Nostromo, and he was now in control of the shuttle.[5] After drifting for thirty-seven years, he detected the distress call sent from the DMSO Marion and rerouted the Narcissus to intercept it, hoping to fulfill his mission to recover a Xenomorph specimen for Weyland-Yutani. His plan ultimately failed, while Ash's consciousness was finally wiped from the shuttle's memory banks, after which Ripley was set adrift aboard the Narcissus once again.

The Narcissus would remain undetected for a further twenty years before a salvage crew discovered it through sheer luck. Jones and Ripley were sent to Gateway Station to recover from their excessively long period in hypersleep, while the Narcissus was studied extensively in the hope that it may shed some light on the Nostromo's disappearance. Evidence from this search was later used against Ripley during the tribunal into the destruction of the Nostromo.

Like its parent vessel, the Nostromo, the Narcissus is named after an element featured in the works of Joseph Conrad — in this case, the titular vessel from his 1897 novella The N*gger of the 'Narcissus': A Tale of the Forecastle (retitled The Children of the Sea in some American editions).

For the filming of the scene where the Alien is finally incinerated in the shuttle's engines, a full-scale replica of the rear hull of the shuttle was suspended vertically from the studio ceiling, while stunt man Eddie Powell (in full Alien costume) was suspended and maneuvered beneath on wires.[6] The effect of the engines firing was created with bright lights, while high pressure hoses were used to create a mist of water that billowed from the engine outlets, serving both to increase the intensity of the lights on film and give the impression of particles or vapor being expelled from the exhaust.[6] The camera was then placed on the ground, directly beneath the replica shuttle, to capture the shots seen in the film.

Following filming on Alien, the Narcissus model was actually lost. Thus, when the shuttle was due to return at the start of Aliens, the effects team had to construct a new model.[7] With precious little photographic evidence to work from, Robert and Dennis Skotak had to painstakingly recreate the shuttle from a handful of detailed still images from Robert Skotak's personal collection and some frame clips from the original film.[7]

A model of the Narcissus.

The Narcissus' description on the box of the Halcyon model.

Part of the Alien Narcissus set.[8] 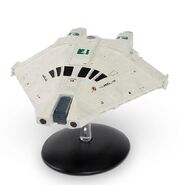 Eaglemoss Collections model of the Narcissus.
Add a photo to this gallery

Retrieved from "https://avp.fandom.com/wiki/Narcissus?oldid=256362"
Community content is available under CC-BY-SA unless otherwise noted.