The Mutated Yautja was a Blooded hunter that had become exposed to Chemical A0-3959X.91 – 15 when bitten by the mutated Construct Elden. After receiving the injuries, the hunter painfully mutated into a bestial cannibalistic behemoth within minutes.

Initially appearing as a typical Yautja, this hunter soon became subject to a heavy mutation following exposure to the black liquid, and had mutated so violently that it only vaguely resembled that of its species. The mutant is easily three heads taller than the average male and it's eyes are pure black, similar to Elden's or the Engineers. It also possessed an extra arm that grew out of its left shoulder. The mutant is hideously strong, able to tear a Yautja's arm off with just it's raw strength and break a bio-helmet in half with a single punch. Instead of four mandibles, ten of them surround the mouth; the mandibles alone can break through a thick, Yautja skull. The mutant seemed to have trouble breathing following the mutation.

Hunt on the Geryone and battle with Elden

Pre-mutation, the mutated Yautja was once an accomplished hunter and member of a hunting party that also belonged to Ahab. The party itself was on a remote planet hunting game before they set their sights on the Geryon, perhaps noticing the mutated construct Elden, currently on a rampage inside the ship to be worthy game. The Predators soon reach the Geryon and invade the ship. The hunter subsequently encounters Elden alongside two others in the depths of the ship, and a fight ensues. Though Elden quickly overpowers a Predator, the hunter tackles Elden from behind. Elden subsequently grows large jaws over his abdomen and bites the Predator's hand, the hunter recoiling in pain as the fight continues.

Eventually, the last hunter standing realizes he is outmatched and ceases fighting Elden, instead branding him with the mark of a warrior. Elden refuses the offer of a trophy and takes his leave. Meanwhile the hunter that was bitten by Elden begins mutating violently.

As another Predator eventually stumbles across the hunter, he reveals himself as a hulking monstrosity and the latter kills the Predator by ripping its arm clean off and biting a chunk off its face, killing it. The mutant proceeds to eat the corpse. It soon turns its attention to several Xenomorph that surround him after equipping itself with its foe's Plasmacaster.

After dealing with the Xenomorphs, the Mutant encounters a heavily mutated Francis Lane and attacks him. Although Francis manages to bite off several mandibles, the Mutant responds by breaking both of his arms and punching his jaw so hard that it breaks in half (before promptly regenerating). Elden eventually rescues Francis and the two defeat the Yautja by pulling both of his arms apart, with Francis ending the Yautja's rampancy by stabbing it with a lead pipe.

The Mutant as it appears on issue three of Alien vs. Predator: Fire and Stone.

The hunter being bitten. 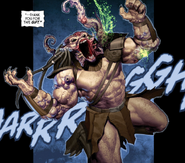 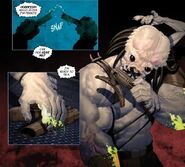 Add a photo to this gallery
Retrieved from "https://avp.fandom.com/wiki/Mutated_Yautja?oldid=245564"
Community content is available under CC-BY-SA unless otherwise noted.