Murphy was a Cheyenne dropship pilot with the United States Colonial Marine Corps. She was killed when her dropship was shot down by a Yautja.

Murphy was the pilot of the UD-4 "Cheyenne" Dropship used by Captain Glass and his platoon to investigate an alien (or "XT") distress signal on the abandoned planet Ryushi. After dropping off the rest of the platoon in their ATV, she returned to orbit. She was later called in for a dust off - a retrieval of the platoon - when they were trying to fight off Yautja that were attacking them due to their having inwittingly taken a Predalien into their midsts, which had by that point burst from the chest of its former host and hidden underneath their ATV. However, when she had nearly arrived for pickup, the zone was still hot and Glass tried to get her to return to orbit until it was clear - unfortunately for every Marine involved, Glass had accidentally unplugged the communications cable that Magyesi had set up when returning to the vehicle with it, and the call never made it through. Murphy was killed when a Yautja destroyed her dropship with a large, Bazooka-like weapon.

Murphy flies the platoon down to the surface of Ryushi.

A Yautja targets Murphy with their bazooka-equivalent weapon. 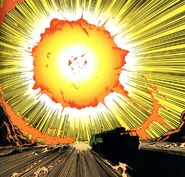 Murphy is killed.
Add a photo to this gallery
Retrieved from "https://avp.fandom.com/wiki/Murphy_(dropship_pilot)?oldid=245168"
Community content is available under CC-BY-SA unless otherwise noted.