Hermaphroditic,[1] referred to as male

Mozart was a Xenomorph Warrior born from Cultist and Xeno-Zip addict Ken Petrillo in order for composer Damon Eddington to harness the creature's screams of rage to be used in his Symphony of Hate project.

The creature was later destroyed after rampaging through a Synsound concert by Chief Phillip Rice, who blew it up with an M-6B Rocket Launcher.

Mozart was born when Ken Petrillo, a former fairly known guitarist turned Cultist (as well as Damon Eddington's former associate) volunteered for impregnation after falling on hard times. After Mozart was born, it was given its namesake by Eddington, who watched it grow and saw himself in the monstrosity of a creature. When it reached adulthood, the creature was given a cat, a dog, a sheep, a cow, a bull, and even a panther to slaughter in order for it to produce the sound Damon wanted, with Damon being unsatisfied with the resulting sounds the creature made. Damon eventually grew more and more mentally unstable due to his recent addiction to Xeno-Zip and his increased obsession with Mozart, resulting in his sense of morality becoming unhinged, and he later had no quarrel with Mozart slaughtering more human subjects, armed with electrostun rifles. In doing so, Damon finally obtained the sounds he wanted and incorporated them in his music.

However, even with all the recordings, it wasn't enough for Damon as he felt like he was missing something intimate and deep. Soon, Damon sees his chance to obtain it through the scientist Darcy Vance, who consistently cared for and fed Mozart. Damon knocked Darcy unconscious and threw her in the cage with the Xenomorph, getting the sounds of shock and betrayal he wanted as she battles Mozart with an electrostun rifle. However, Darcy runs off into a secret escape tunnel that the creature could not fit into.

Soon, something with Damon's recording system goes awry and Eddington, in a fit of desperation, decides in slipping into the cell with his portable syndisc player/recorder to capture the noises of Mozart's screams, hoping that Mozart will be too busy with Darcy to notice.

Mozart does notice, however, and quickly rushes to kill Damon when he smells a rival hive due to the Xeno-zip Damon had recently took. Mozart shreds Damon's torso, killing him. He then follows the vibrations and sounds of activity outside. It comes from the Helltones, a mainstream band that Damon despised. The crowd, high on Xeno-Zip, causes Mozart to go into a berserk state of rage and begins slaughtering the band and the crowd at the front. A few members of the crowd think that it was all part of the act and don't run or fight as they are slaughtered. Many later come to their senses and begin running in terror.

Mozart is killed by Chief Phillip Rice shortly after rampaging through the concert at Synsound which resulted in thirty-two injured and seventeen dead.[2] Months later, the incident is recreated for entertainment purposes. Mozart lives on, in hologram form. 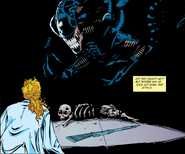 Retrieved from "https://avp.fandom.com/wiki/Mozart?oldid=229106"
Community content is available under CC-BY-SA unless otherwise noted.