"Some kind of tracker. It's been modified."
―Amanda Ripley, upon acquiring a Motion Tracker

A Motion Tracker[2][3][4] was manufactured by Arious in the United States of America and used by Amanda Ripley aboard Sevastopol Station in 2137.

The Tracker was prone to interference in enclosed spaces; in such situations, its screen tended to flicker, making it harder to determine the exact location of any moving targets. However, the Tracker's fundamental functions were unaffected and continued to work normally.

Unlike the tracking devices used by the crew of the USCSS Nostromo (including Amanda's mother, Ellen Ripley),[5] the Motion Tracker was relatively small (possibly even smaller than the M314 Motion Tracker used by the United States Colonial Marine Corps in 2179) and able to easily be carried in one hand.

As a reference to the tracking device prop in Alien using an ice cube tray as a greeble,[6] the Motion Tracker also incorporates an ice cube tray-like detail on its right side. More nods to the tracker seen in the first film include the forward-facing "probe" behind the screen, which is remarkably similar to (albeit far smaller than) the probe that extended from the front of the tracker used in the movie and the red lines, letters and numbers that surround the screen, which are similar to the ones present around the grid on the film's tracker.

In the CGI trailer "Improvise" seen at Gamescom 2014, the Motion Tracker differs heavily from its in-game appearance. The Tracker in the trailer was designed by Maciej Kuciara, who notably incorporated a Hama self-timer in the design of the tracker,[7] which is another reference to the Motion Tracker used in Aliens.[8]

Additionally, the Motion Tracker in the trailer is supposed to look like it was assembled by Ripley from scrap parts[7] (as demonstrated at the end of the trailer when Ripley makes the screen of the tracker by taking one from a toy robot), but, in the game, advertisements for the Tracker indicate that it's actually a commercial product, used specifically for tracking vermin (although Ripley's is modified).

An ad for the Motion Tracker.[2] 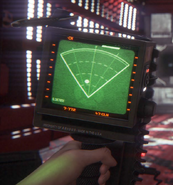 Close-up of the Motion Tracker shown in pre-release footage of Alien: Isolation. 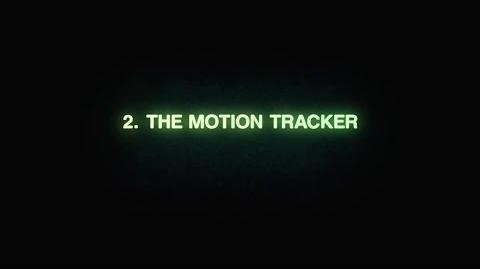 'How to' Official Guide - Motion Tracker US