Xenopedia
Register
Don't have an account?
Sign In
Advertisement
in: Spacecraft, Weapons and technology of the Hunt, Technology,
and 3 more

"Unknown vessel detected! Shit, it just appeared out of nowhere!"
―Unnamed dropship pilot regarding an uncloaking Mother Ship (from Aliens vs. Predator)

A Mother Ship (Jag'd'dja atoll[1] in the Yautja language) is a massive, mobile base for Yautja hunters. Mother Ships are totally independent craft where a number of Scout Ships can dock. These ships rarely enter conflict with another force, and are usually inhabited by a single Clan, led by the Clan Elder.

Like other Yautja craft, they utilize cloaking technology that renders them sensor-invisible, making them virtually impossible to find. Pilots of other Yautja vessels, however, can use their vessel's standard beacons to locate a nearby Mother Ship. Here, warriors can battle for respect and acquire new weapons and devices. Most Mother Ships also have a trophy case in which its clan's trophies are put on display. Almost every Mother Ship holds a captive Xenomorph Queen, which the Yautja warriors most likely release in an area for a Hunt.

They are fully equipped with scout ships and insertion pods, capable of launching a hunter onto a planet's surface and sending smaller Scout Ships onto Hunts. They also come with powerful beam weapons, powerful enough to punch a hole from the orbit of a planet down to the deep crust. They also have two versions of Self-Destruct Devices, one that detonates in a massive thermonuclear explosion, and another that implodes the ship, removing all trace of its existence.

"No wonder they're such jerks. If I spent fifteen minutes tooling around in a madhouse like this, I'd want to kill something myself."
―John Schaefer regarding a Mother ship interior (from Predator: Cold War)

It is known that the Predators have some form of offensive weaponry on their ships, as seen when a Mother Ship destroyed the USS Marlow with some kind of rockets. They also have a very powerful and accurate plasma beam, which we see in use in Alien vs. Predator when a Mother Ship used one to bore through hundreds of meters of ice in seconds, all the way from orbit, to reach the Pyramid under Bouvet Island.

Drop pods and other vehicles

Mother Ships can also send drop pods containing individual Predators to the surface of a planet. Mother Ships also were equipped with some kind of small escape ship. Once a Yautja is inside the escape ship it detaches from the Mother Ship and uses its two thrusters to propel itself through space. Similarly to the insertion pods, the escape ships had only room for one Yautja.

Mother Ships have holographic technology. Just like on the Predator's wrist gauntlet, Mother Ships have some from of holographic equipment but this shows real-time images from within a location as well as 3D mapping. Although no one knows exactly how this is accomplished, it may utilize a small hovering robot or machine that uses local airborne water (or similar liquids) molecules to light up into a holographic picture. A similar tactic is planned by mankind to begin to build holographic computer monitors.

Most mother ships have trophy rooms that contain skulls and or skeletons of the prey that the clan has hunted down over the centuries and captured, such as, dinosaurs, xenomorphs, humans, and other creatures.

A Mother Ship over Bouvet Island in 2004

A Mother Ship at the end of the 2004 Antarctic Hunt

The Interior of a Mother Ship

A Mother Ship flying past Saturn.

A Mother Ship beneath Los Angeles in 1997

A Mother Ship landing in the ruins of New Way City in 1930.

The Ne'dtesei from the Aliens vs. Predator 1989 short. 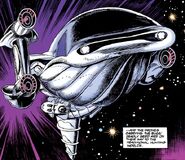 The Shell, from Aliens vs. Predator: War.

A Mother Ship, from Batman versus Predator. 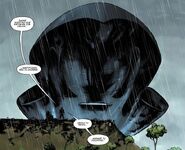