The Mk.30 tactical helmet was a piece of headgear worn by the Weapons Officer aboard a UD-4 "Cheyenne" Dropship. It included an eyepiece display, which could be snapped down over the left eye to filter tactical data into the wearer's normal vision. The WO could look out of the UD-4L's cockpit at a target and the ship's Target Identification and Acquisition System would flash its profile onto the eyepiece display. Punching the fire control switch allowed the WO to select tracking or launch functions versus the target and initiate an attack.[2]

The Mk.30 was used by the United States Colonial Marine Corps. Private First Class Daniel Spunkmeyer wore one during 2nd Battalion Bravo Team's drop to the colony Hadley's Hope on Acheron in 2179, although he instead used a headset on the surface.[3] Dropship pilot Johnson later used an Mk.30 in 2231 when the crew of the USS Verloc was deployed to LV-1201 in order to investigate a loss of communications with the Weyland-Yutani Primary Operations Complex on the planet.

As with Corporal Ferro's helmet,[4] the Mk.30 prop used in Aliens was based on a Sound Protective Helmet-4 (SPH-4) helicopter helmet with M87 microphone.[5] Other parts used on the prop include a Ferranti helmet-mounted sight unit for the British Tracked Rapier missile system, parts from Japanese Macross kits[5] and parts from a Polaroid 635 camera.[6]

The Mk.30 screen-used by Daniel Kash (Private Spunkmeyer) was briefly reunited with Kash's screen-used costume (part of The Harry Harris Aliens Collection & Archive) when they were photographed for Aliens: Colonial Marines Technical Manual,[7] first published in 1995.

At some point, the screen-used helmet was on display in the museum adjacent to the gift shop at Alien War (which ran from 1993 to 1996) in a display case with Ferro's helmet, among other props.[8] 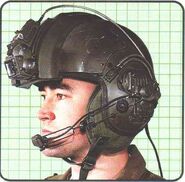 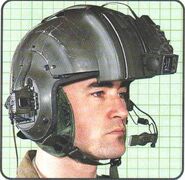 Ditto.[10]
Add a photo to this gallery

Retrieved from "https://avp.fandom.com/wiki/Mk.30_tactical_helmet?oldid=245216"
Community content is available under CC-BY-SA unless otherwise noted.