"Good morning. For those of you I hired personally... it's nice to see you again. For the rest of you, I am Meredith Vickers, and it's my job to make sure you do yours."
―Vickers (from Prometheus)

Director of voyage to LV-223

Charlize Theron
Meredith Vickers, EC/#9549874308,[4] was a Weyland Corp representative stationed aboard the exploration vessel USCSS Prometheus on its expedition to LV-223. She is skeptical of the mission and believes it is a waste of time. She is also the estranged daughter of Weyland Corp founder, Peter Weyland.

Meredith Vickers was the daughter of Peter Weyland, founder of the Weyland Corp. Her father never gave Vickers much attention, but instead gave much attention to his artificial "son" David. This caused Vickers' relationship with her father to deteriorate.

In 2089, her father (whose health was rapidly declining) was contacted by archeologist Elizabeth Shaw to share her discovery at a cave located in the Isle of Skye regarding a star map that she interpreted as an invitation from humanity’s forerunners, or "Engineers". Believing that this would save him from death, Weyland funds the creation of the scientific vessel Prometheus to follow the map to the distant moon LV-223. However, he also left his company in ruin. Vickers had no choice but to step in as the acting CEO of the entire company all by herself.

Vicker's father offered her to follow him in his expedition to LV-223. Though she was reluctant to join the expedition, Vickers eventually decided to serve as the mission's director, while her father secretly spent his remaining days in hypersleep on board the Prometheus with only David, his bodyguards, his doctor and Vickers herself knowing of his presence.

After spending two years in hypersleep, Vickers awakens and asks David about the period of time, as well as the current status of the Prometheus' crew. As the Prometheus nearly arrives on LV-223, Vickers had the entire crew awaken of the mission's briefing to find the Engineers. Shortly after the briefing, Vickers meets with Shaw and Holloway and told them to avoid making contact with the Engineer without her permission. Once the Prometheus lands on LV-223, the team explores a large artificial structure nearby, with Vickers monitoring their activity from the Prometheus. Inside they find numerous stone cylinders, a monolithic statue of a humanoid head, and the corpse of a large alien thought to be an Engineer, proving that Vickers' doubts were wrong.

As a rapid windstorm approaches, Vickers threatens to lock down the Prometheus if the team doesn't return in fifteen minutes. Though Shaw and Holloway were caught in the windstorm, all the team members made it back safely, except for Millburn and Fifield who were left stranded in the structure. Vickers was present when Shaw, Ford, Holloway and David were examining the remains of an Engineer's head they retrieved from the structure. Shaw and Ford used a Synapse Reestablisher on the Engineer's head to temporarily revive it in order to learn more about it. While it succeeded at first, it backfires shortly after and causes the Engineer's head to explode. After David commune with Peter via visor-helmet, Vickers forces David to tell her what did her father said to him. David simply told her that her father told him to "try harder." While on the Prometheus' cockpit, Captain Janek engages in a conversation with Vickers and tells her his suspicion of her being an android due to her cold behavior. Vickers responded by telling him to meet her in her room in ten minutes.

The next day, the team prepares to reenter the structure to search for Fifield and Milburn, only to find Milburn's corpse. David cuts off communication with Vickers and separately discovers a control room containing a surviving Engineer in stasis, and a star map highlighting Earth. Holloway who unknowingly ingested the black liquid leads to an infection that rapidly ravages his body. He is rushed back to Prometheus, but Vickers refuses to let him aboard, and at his urging, she reluctantly burns him to death with a flamethrower. After Weyland is awakened from stasis and prepares to leave with the crew for the structure, Vickers addresses him as "Father".

She decides to abandon the mission and return to Earth after her father and many of the crew members are killed by the Last Engineer. However, Shaw convinces Janek, Chance and Ravel to stop the Engineer's Juggernaut ship via a suicide attack instead of going back to Earth in order to stop the Engineer to complete his mission to destroy Earth. Vickers was against the idea and demands Janek to head back for Earth, but Janek, not wanting to let Earth be destroyed, defies her orders and he and his loyal crew prepare to ram their ship into the Juggernaut to stop the Engineer for good. Taking no regard in this, Vickers is forced to escape the Prometheus' destruction via an escape pod and lands on the ground, reuniting with Shaw. However, the two are soon forced to run after the Last Engineer loses control of the Juggernaut due to Prometheus' successful suicide attack; Shaw manages to evade the Juggernaut while Vickers is crushed to death by the crashing Engineer ship.

It is often debated among fans whether Vickers is a human or merely another android like David, albeit a more advanced model.

Evidence for being human:

Evidence for being an android:

Regarding the possibility of Vickers being an android, some fans have theorized that Vickers might not be aware of the fact that she is an android and has spent her whole life believing she is a human. This seems unlikely, however, as Vickers must surely have cut herself at some point in her life, and would therefore see that she does not bleed red.

Vickers as she informs Charlie Holloway and Shaw of her "agenda".

Vickers as she enters the hangar to intercept the infected Holloway.

Vickers and Janek in the cockpit. 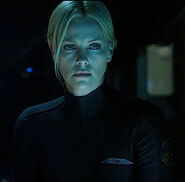