Xenopedia
Register
Don't have an account?
Sign In
Advertisement
in: Weapons and technology of the Hunt, Technology, Predator culture, Yautja (Predator)

The Medicomp,[1] also known as the MediKit,[2] is a powerful and versatile first aid kit used by the Yautja to treat wounds while on a Hunt. The Medicomp contains various serums and surgical tools that can be used to treat a wide range of injuries quickly and effectively.

Yautja rarely hunt in large groups, thus they cannot expect to receive quick or organised assistance should they suffer any injuries while hunting. As a result, individuals carry a medicomp to ensure they are able to efficiently treat themselves.

In Predator, the Jungle Hunter uses his Medicomp to heal a bullet wound after being been shot in its leg by Mac, and the visible contents are powder, a shrapnel extractor, a small spatula, a pair of scissors, two wound clamps, a stimulant shot, and a tube of antiseptic. In Predator 2, the City Hunter uses his kit to heal a wound where his arm was cut off, and to heal bullet wounds on his body; unlike the Jungle Hunter's Medicomp, it has a radically different design, possesses surgical blades, a shrapnel extractor, wound clamps, a spatula, a burner for melting medicine, a needle full of medicine, two reloads for the needle, a container full of a blue solvent, and an emergency breathing mask. When the Predator uses the burner, he crushed pieces of plaster and the mirror, and then he adds the blue solvent, formed a gel, and cauterized the wound.

While the Medicomp is an important instrument in healing the Predator, it appears that the tools and methods used to heal are quite painful; the Predator roars in pain when using the Medicomp to heal himself, as shown in many films and video games.

In Predator: Concrete Jungle, it's a container, when injected into the flesh, it heals any wound on the body. In the Alien vs. Predator video game series, it appears as two knives that which are injected and heals the body.

In Mortal Kombat X, the Predator (Hunter variation) is given a move in which he plunges a Medicomp into his knee, roaring in pain. This recovers some health but removes stamina.

In Predator: Hunting Grounds, instead of having a full-blown Medicomp, the Predators instead carry around a small syringe (exactly like what the Jungle Hunter uses, but with a longer needle tip), that upon injection into their side, heals them.

In Predator, the Jungle Hunter uses his Medicomp to heal a bullet wound after being been shot in the leg by Mac. The visible contents are powder, a shrapnel extractor, two wound clamps, a stimulant shot and a tube of antiseptic.

In Predator 2, the City Hunter uses his kit to heal his wounds in Ruth Albright's apartment. The kit contains surgical blades, a shrapnel extractor, wound clamps, a spatula, a burner, a syringe with spare medicines, a container full of a blue solvent and an emergency breathing mask. The Predator uses the burner on several crushed pieces of plaster and mirror before adding an unknown blue solvent, forming some kind of gel that it then uses to cauterize its severed left arm.

In Predator: Concrete Jungle, the Medicomp takes the form of a container that, when injected into the flesh, heals any wound on the body.

In the Alien vs. Predator video game series, the Medicomp is replaced with a simpler "health shard" mechanic, whereby the player injects themselves with two sharp, serrated needles that heal the body.

A Medicomp in Predator.

The City Hunter takes out his Medicomp. 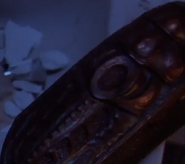 The City Hunter's Medicomp while closed.

A Medicomp in Predator 2.

The City Hunter's burner (folded up)

The City Hunter opens a tube of solvent.

A Medicomp in Aliens vs. Predator: Requiem. 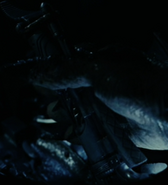