"They ain't payin' us enough for this, man."
―Pvt. Drake (from Aliens)

Mark Rolston
Private First Class Mark Drake[1] was a Smartgun operator with the United States Colonial Marine Corps, part of 2nd Battalion Bravo Team.[7] He was a member of the combat unit deployed to LV-426 aboard the USS Sulaco in 2179, to investigate the sudden loss of contact with the colony of Hadley's Hope. He subsequently perished as a result of the Xenomorph infestation at the colony.

Drake was part of Second Squad's gun team, along with Corporal Hicks.[5] He had a long history with fellow Smartgun operator Private Jenette Vasquez,[8] and the two shared a close, possibly romantic relationship. He was killed during the early stages of the operation when an exploding Drone showered him in acid.

Drake was evidently a delinquent as a youth, and his crimes escalated until, still at a young age, he was convicted of murder and sent to juvenile prison.[9] It was there that he met Jenette Vasquez. The pair subsequently enlisted in the USCM under the Service or Jail Act, thereby escaping further jail time.[1] Both Drake and Vasquez passed through boot camp together and afterwards requested assignment to the same unit. Both also chose to specialize in advanced weapons training, during which their Smartgun drill instructor labelled "the sweethearts" on account of their close relationship (although both denied this relationship was romantic).[1]

Upon waking from hypersleep aboard the Sulaco, Drake immediately set to complaining about his job and the current mission, before joining Private Vasquez in both physical training and mocking Private Hudson. At breakfast in the mess hall, Drake continued joking with Hudson, "volunteering" him for Bishop's knife trick, much to Hudson's terror and Drake's amusement.

"Must have been a hell of a fight..."
―Drake, discussing the fate of the Hadley's Hope colonists (from Aliens)

After landing, Drake and Corporal Hicks partnered off for the initial sweep of the apparently abandoned colony complex. It was Second Squad who discovered Newt hiding within the colony's ventilation ducts, with Drake almost shooting her when she startled him; only Hicks' intervention, pushing Drake's Smartgun aside at the last second, saved the little girl's life.

The Marines later made their way to the Atmosphere Processing Plant in search of the other colonists. After discovering the Xenomorph Hive, orders came down that the unit's Pulse Rifle ammunition was to be confiscated and the two Smartguns deactivated, to prevent stray gunfire damaging the station's volatile reactor cooling systems. While Drake and Vasquez promptly removed the batteries from their weapons, rendering them inoperable, Vasquez subsequently produced two backups from her battle harness when Sergeant Apone turned his back on them, allowing them to discretely reactivate the machine guns. It proved to be a fortuitous decision — when the team was disastrously ambushed by a horde of Drones, Drake and Vasquez were the only Marines able to provide the section with effective cover, although the gunfire badly damaged the Atmosphere Processor's reactor, as had been feared, and the station later went into meltdown.

"Drake! WE ARE LEAVING!"
―Hicks, to Drake (from Aliens)

Despite the heavy fire being laid down by Drake and Vasquez, more than half of the team was killed in the initial assault, including Apone, leaving Hicks to organize a hasty retreat. Drake held the rear, using his Smartgun to slaughter incoming Xenomorphs while the others ran for the APC. While successful, he soon exhausted his ammunition and was forced to discard the cumbersome weapon, switching instead to the M240 Incinerator Unit he had acquired as a backup.

As he neared the APC, Drake failed to notice a Drone emerge from a nearby wall to ambush him. It was spotted by Vasquez, who warned him before shooting it repeatedly with her Smartgun. However, the creature exploded and fatally showered Drake with its acid blood. Flailing in agony, he inadvertently sprayed the APC with his incinerator before collapsing into the flames as he died, creating a fire the survivors had to deal with before they could close the door and escape.

As with several of the other Marines, Drake seemed to have a degree of contempt for his job, often complaining that he was underpaid; when told by Lieutenant Gorman that the camera on his Head Mounted Sight was malfunctioning, he decided to "fix" the problem by nonchalantly smashing the device against the nearest support beam (fortunately, it worked). Similarly, Drake had issues with following orders that he felt compromised the team, such as when disobeyed instructions to deactivate his Smartgun inside the Hive.

Despite his gruff attitude, Drake was a chronic prankster who was always engaging in light-hearted joking with his squadmates or playing tricks on other members of the team, particularly Hudson. He was very close to fellow Smartgunner Vasquez; the two could often be found training together and encouraging each other in their disruptive behavior, and may or may not have been involved in a romantic relationship.

Drake was outfitted with an M56 Smartgun, customized with the words "My Bitch" painted on the right side forward of the charging handle, as well as the associated M56 combat harness and Head Mounted Sight; on the rear armor plate of his battle harness, he had succinctly summarized his work ethic by stenciling the phrase, "Eat the apple and fuck the Corps".[1] Drake was also proficient with the M240 Incinerator Unit. 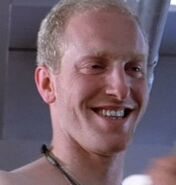 Drake (center,right) during the mission briefing on Hadley's Hope.

Drake with his smartgun. 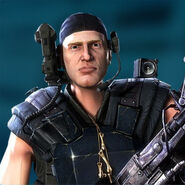 Behind the scenes photo of actors Mark Rolston (Drake) and Bill Paxton (Hudson) in their costumes.