The Mantis Alien is a part of the Aliens toy line produced by Kenner Products.

Whilst it is not mentioned or shown in the Aliens: Swarm comic, it could be presumed that the Mantis Alien is spawned from a mantis. However, a Facehugger would dwarf even the largest known species of Mantis so it is more or less inconceivable that a Facehugger would attempt to do so instead of finding larger more suitable hosts. This would imply that the Mantis Alien may have been genetically engineered unless some fictional or as of yet undescribed mantis species of suitable size were used as hosts, similar to the scorpion-like lifeforms of the planet Tanaka 5.

The Mantis Alien possesses insect-like characteristics. Its skin coloration is of a more greenish hue compared to its darker colored brethren. Its arms are much longer than the average Xenomorph's and possess spiked undersides. The tips of these arms have three pincer-like digits with large talons. The Mantis Alien is very agile and is able to make jumps of great distances to move from place to place, having been shown to be able to jump over 90 feet with ease. 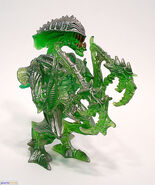 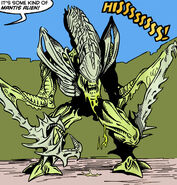 The Mantis Alien as it appears on the Kenner comics. 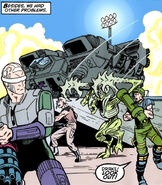 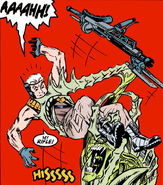 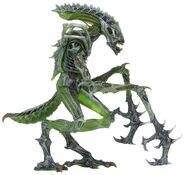 NECA's redesign of the Mantis Alien. 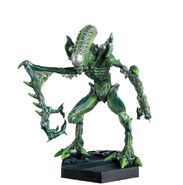 Eaglemoss Collections figurine of the Mantis Alien.
Add a photo to this gallery
Retrieved from "https://avp.fandom.com/wiki/Mantis_Alien?oldid=254778"
Community content is available under CC-BY-SA unless otherwise noted.