Bill Duke
Sergeant Mac Eliot[3] was a mercenary and a member of Major "Dutch" Schaefer's private military team. In 1987, Schaefer's team was hired by the U.S. military and the CIA for a rescue mission in Guatemala. After discovering that their mission was a set-up to dupe them into eliminating the rebels in the area, Dutch's squad came into contact with a Predator that stalked and killed the elite mercenaries one-by-one.

Mac had served alongside his close friend Blain Cooper for many years before they both joined Dutch's team, and the two had developed a close friendship. He was killed facing the Predator out of desire for revenge over Blain's death.

"Whole platoon, 32 men chopped into meat, and we walk out — just you and me. Nobody else. Right on top, bro! Not a scratch. Not a fuckin' scratch..."
―Mac to the fallen Blain, regarding the ambush in Cambodia (from Predator)

Mac and Blain had known each other since the Vietnam War, where they served together in the same platoon in the 101st Airbourne Division.[4] During a disastrous ambush south of Khe San, the entire 32-man unit was slaughtered with the exception of Mac and Blain, who escaped without a scratch.[5] This event was one of the defining moments in their friendship. In 1980, they both joined the private military team being set up by Dutch.[6] As part of the unit, they saw operations in Angola, Cambodia, Lebanon and Afghanistan,[7] and recently ended a terrorist siege at the Sudanese Embassy in Berlin, Germany.[8]

"You're ghostin' us, motherfucker! I don't care who you are back in the world — you give our position one more time, I'll bleed you, real quiet, and leave you here. Got that?"
―Mac threatening Dillon (from Predator)

From the very beginning of the mission in Guatemala, Mac was at odds with Dillon, whom he considered a pencil-pusher with insufficient experience in the field. When the team discovered the skinned bodies of Jim Hopper and his men, Mac in particular was disgusted with how they had died, lamenting that a soldier deserved better. When the team reached the guerrilla encampment, Mac's mistrust of Dillon was vindicated when he personally discovered the "cabinet ministers" they had been sent to rescue were actually colleagues of Dillon's from the CIA, and that the entire mission had been a set-up.

On the way to the extraction point, Hawkins and Blain were killed by the Jungle Hunter; Mac was the first on the scene when the latter fell, and he saw the creature as it prepared to claim Blain's body. Mac, briefly shaken, quickly recovered himself and immediately opened fire, eventually using Blain's Minigun in an attempt to kill the Predator. However, he only succeeded in grazing the Predator's left leg, using up the weapon's ammunition supply and chopping down a swath of rainforest in the process. Following the incident, Mac struggled to explain what he had seen to the rest of the team, but was apparently convinced the entity had not been human.

"Out there. Past them trees. You see it? I see you!"
―Mac to Dillon, as he observes the Jungle Hunter (from Predator)

Mac made it his own personal mission to kill the Predator at any cost, promising to carve Blain's name into the creature before he killed it. When a wild boar strayed into the team's heavily defended laying up position in the middle of the night, Mac mistook the animal for the Predator and savagely killed it with his knife in a blind rage.

When an attempt to capture and kill the Predator the following day using home-made traps failed, Mac, now delirious with fear and rage, recklessly took off in pursuit of the escaping hunter. He later composed himself somewhat, regrouping with Dillon and coming up with a plan to ambush the creature, but was killed when the Predator saw him coming and shot him through the head with its Plasmacaster. The Predator later claimed Mac's skull as a trophy.

"Those eyes, they... they disappeared."
―Mac, describing the Jungle Hunter (from Predator)

While a good soldier, Mac became emotionally unstable following Blain's death and his sighting of the Predator. His mental condition continued to deteriorate as the Predator stalked the team, finally snapping when he came face-to-face with the creature again during a failed attempt to capture and kill it. Along with Billy, Mac was convinced the entity hunting them was not human.

Mac had an intense dislike for Dillon, who he even threatened to kill if he did not stop giving away the team's position with his reckless movements. However, the two later seemed to develop a mutual respect for each other when they faced the Predator alone. Notably, Mac was constantly shaving, possibly a nervous habit to help calm him during combat operations.

Mac carried an M60E3 machine gun with a shortened barrel during the mission to Guatemala, as well as a backup Desert Eagle in a shoulder holster, although he never used the pistol. Mac also carried a combat knife and part of the team's large supply of M18A1 Claymores. Following Blain's death, he briefly used the latter's M134 Minigun, expending the weapon's entire supply of ammo in an attempt to kill the Predator. 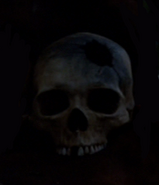