The Armat M4A3 Service Pistol, also known simply as the Service Pistol, is an American-made semi-automatic, recoil operated, magazine-fed pistol chambered for 9mm ammunition. It was notably employed by the United States Colonial Marine Corps as their standard issue sidearm. The M4A3 is part of the M4 family of handguns and was succeeded by the upgraded M4A4.

The M4A3 is a 9mm automatic, recoil operated, magazine-fed handgun. The working mechanism is made of steel alloy with some high-strength plastic parts, while the outer casing is machined from lightweight alloys. The entire weapon, including a full 12-round magazine, weighs no more than 0.95 kg.[2] The M4A3 is largely ineffective at stopping most Xenomorphs and Yautja, making it somewhat of a last resort weapon.[3]

The M4A3 is notable for being the standard issue sidearm of the United States Colonial Marine Corps[1] and is standard for USCM Medics and Synthetics.[3] Due to it being largely ineffective against most Xenomorphs and Yautja, it is usually used as a last resort weapon.[3] The M4A3 was also the standard sidearm of Weyland-Yutani PMC Grunts. 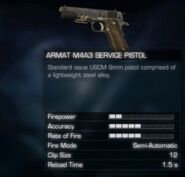 Retrieved from "https://avp.fandom.com/wiki/M4A3_Service_Pistol?oldid=245010"
Community content is available under CC-BY-SA unless otherwise noted.