The M3 Pattern Personal Armor,[2] also known as the Armored Vest,[3] is the standard ballistic protective armor system employed by the United States Colonial Marine Corps in the 22nd century. Manufactured by Armat Battlefield Systems,[4] it is designed to balance lightness and comfort with optimum protection. The M3 system is primarily concerned with protecting the user's torso only; head protection is provided by the M10 Pattern Ballistic Helmet.[5]

The M3 armor is based on the French armed forces Cuirasse de Combat ("fighting armor") and consists of a sandwich of materials molded to form a rigid shell. The outer layer is an ultra-light titanium-alumide alloy designed to provide structural strength and ablative protection against lasers.[6] Beneath this is a core consisting of a layer of boron carbide resin bonded to a layer of graphite-composite carbon fibre. Boron carbide is an incredibly hard ceramic designed to shatter a bullet on impact while simultaneously forming a conoid base to absorb its energy.[6] Beneath this, the carbon fibre layer provides ballistic protection at the point of penetration by delaminating across a large area, thereby absorbing more energy. Finally, on the inside of the armor is a woven liner made of 1,500 denier Venlar fibres. This woven liner dissipates the remainder of the energy by deforming in the area of impact and is also able to catch any spalling or fragmentation from the first three layers.[6] Since any bullet or fragment impact on the armor shell tends to compromise its integrity and ability to provide ballistic protection, it is standard practice to discard damaged pieces and replace them with new sections immediately.

In practice, the stopping power of M3 armor is somewhat limited versus direct hits, particularly when dealing with high-velocity ball ammunition and High Explosive Armor Piercing small-arm rounds. However, it can be expected to stop low-powered ball ammunition and provide some protection against impact-fused explosive bullets and grenade or artillery fragments. Some stealth characteristics have also been included, such as curved and rounded surfaces to reduce radar signature, and infrared masking.[7]

As standard, the M3 armor system is issued in a woodland camouflage scheme, but various patterns are available for operations in different terrains and climates. The surname of the individual Marine issued the armor is printed across the top of the front of the vest, just below the neck.[8] Additionally, many Marines elect to personalize their armor with slogans, pictograms, and other personal touches. While officially against regulations, this practice is mostly tolerated, unless the troops are operating in high profile positions.[9] The armor is fully adjustable and can be fitted over the top of the USCM standard IRC Mk.50 Compression suit for combat in low-pressure environments.[10]

The Marines on the USS Solomon used modified variants of the M3 armor system, dubbed hazard suits, they were built to protect the wearer from CBRN threats. It had additional pieces of arm and leg armor that covered the outer thighs, forearms, and arms proper. This version of the armor notably lacked the lower abdomen armor.

The primary component of the M3 armor is a rigid vest, which protects the thoractic-abdominal region, front and back, between the upper abdomen and neck. This vest comprises a two-piece clamshell secured by plastic clips. At the top of the clamshell, above each shoulder, is a rigid load-bearing arch from which hang the webbing straps. These arches are padded underneath to protect the wearer's shoulders when the armor is loaded with additional weight.[7] Two segmented pieces attached by webbing straps protect the front and side of the shoulders.

Inside the vest are remote biomonitors that monitor the wearer's life signs, including heart-rate and breathing; an optic cable connects these to the PRC 489/4 Personal Data Transmitter contained within the M10 helmet.[5] On the rear left shoulder is a bracket for attaching the TNR Shoulder Lamp. Also on the back of the armor are three mounting brackets for an Individual Marine Pack (IMP) frame. The IMP is a standardized lightweight medium pack designed to carry up to 24 kg, attached to a carbon fiber 'A'-frame which clips directly into the rear mount. The pack is water repellent but not entirely waterproof, although additional waterproof liners are issued for each of the pack's main compartments and pockets.[5] The mounting brackets on the vest can also accept the life support unit used in conjunction with the Mk.50 Compression suit, which is then connected directly to the thermal regulation suit and helmet.[10]

Below the armored vest is a separate section that covers the front abdomen and groin. This is a flexible pad of rheological ballistic armor secured by a 'diaper' harness. A rigid armor plate is fixed to the lowest part of the pad to protect the genitals.[5]

Leg armor consists of a pair of clamshell greaves which cover the whole of the lower leg from ankle to knee. At the top, knee segments are articulated on webbing straps and tied around the leg above and at the back.[5]

Velcro-lined heavy duty nylon webbing with side-release snap buckles. Comprises equipment belt with keepers, and suspender-style bandoleers that attach by snap straps to the load-bearing shoulder pauldrons of the M3 Combat Armor's vest. Each bandoleer acts as a grenade sling with four elastic loops for holding 30mm rifle grenades (18 total). A number of pouches can also be attached and these can be used for carrying items such as a bypass kit, personnel first aid kit, respirator, water hydration system or spare ammunition. A combat knife or pistol holster can also be attached to the webbing.

The Marine armor used in Aliens was designed by director and writer James Cameron and Emma Porteus and built by Terry English primarily out of aluminum lined with foam. English built each character's set to fit the actor precisely and also hand-painted them in Humbrol enamels. The cast was encouraged to customize their armor, as did soldiers in the Vietnam War.

James Cameron's original design for the armor included a throat guard that Terry English created from hand-formed aluminum along with the rest of the armor. After viewing the completed armor, Cameron felt the guards would get in the way of the actors so they were removed.[14]

The armor and helmet worn by Pvt. Hudson in Aliens. Image from The Harry Harris Aliens Collection & Archive.[15]

One of the production-made throat guards.[14] 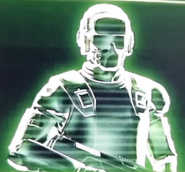 The hazard suit variant of the M3.

Retrieved from "https://avp.fandom.com/wiki/M3_Pattern_Personal_Armor?oldid=264315"
Community content is available under CC-BY-SA unless otherwise noted.