The Armat Battlefield Systems M39 Submachine Gun is an American-made submachine gun used primarily by the United States Colonial Marine Corps as their standard issue SMG, typically during operations in civilian areas[1] and by Weyland-Yutani PMCs.[1][2]

Due to the relatively low-powered round it fires, the M39 is ineffective against armored opponents. It's lack of penetrating power also makes it useful in urban operations where collateral damage may be a concern, as walls and other obstacles in the environment will effectively stop stray rounds, thereby minimizing the risk to innocent bystanders. Even though the weapon fires a relatively small round, the M39 has extreme recoil, even higher than that of the M41A Pulse Rifle, especially when the weapon is equipped with the Magazine Accelerator.

The standard M39 came equipped with ghost ring sights providing minimal occlusion to the shooter's view, and a collapsible stock which could also be completely removed.[3][4]

Various customization options were available for the M39 including the High-Capacity Magazine, A4 Stabilizing Stock, Laser Targeting System, S6 Reflex Sight, Fold Down Iron Sights and the previously mentioned Magazine Accelerator. Also available for the M39 were "Skins" such as "Death Scale", "Digitized" and "Black Death".

Lieutenant Lisa Reid employed her M39 SMG after her dropship crashed down to the surface of LV-426, her weapon is a stock version without any personal design or attachments to it. Corporal Christopher Winter (and characters in co-op) may have used this weapon and/or swapped out for a different weapon over the course of the game's events, in addition, he may have been able to customize it to make it on-par with other weapons that he may or may not have in his arsenal.

Ironically, despite being a standard-issue SMG for the USCM, more so when there are civilians involved, none of the marines (besides the aforementioned two, five if including co-op characters) from the USS Sephora ever used this weapon during the conflict of LV-426, likely due to the fact that it is a distress call operation and since it is coming from a hostile planet no less. Instead, a majority of Weyland-Yutani PMC Grunts use this weapon as their standard-issue. In-game, upon a PMC's death, their weapon will suddenly vanish, much like the rest of the weapons they have.

Lisbeth Hutchins armed herself with a M39 along with other weapons after subduing two PMCs with Facehuggers. Samwell Stone, Turk, Hicks and Rick Levy carry their M39's at the ready, presumably taken from other PMCs. That is until Stone and Hicks obtain the M41A MK2 to upgrade their firepower. All of the characters have their M39s at the ready until their respective deaths (barring Hicks, who is captured and Levy, whose fate is unknown).

Three of the PMCs in particular that encountered Stone, Hicks and Turk carry M39s, one of the stray bullets coming out from the PMC's weapons manage to graze a Facehugger that was attached to Ripley inside her hyperlseep chamber, causing an electrical fire as a result due to the spillage of its acid blood.

Caseless rounds: The game never mentions what specific rounds does the M39 chambers. It is assumed to be firing caseless, low-powered rounds that have little-to no penetrating power and with less stopping power to a M309 round from a M41A pulse rifle, lowering the chance of potential ricochet and unintended damage. These factors of allow the weapon to be effective at noncombatant areas. It may be chambered in 9mm caliber, as seen in the weapon's label (see Trivia below).[5]

The M39 is unlocked at marine level 7, after the MK221 Tactical Shotgun. There is no legendary weapon equivalent to this weapon as it is not a weapon used by the crew of the USS Sulaco in Aliens, nor does the weapon make an appearance in the film during that time. This weapon can be used earlier, should the Stasis Interrupted campaign be played first before the main campaign.

Customized M39, with a Laser Targeting System and A4 Stablizing Stock equipped. 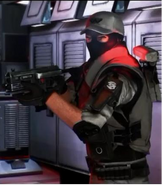 A Weyland-Yutani PMC armed with an M39 aboard the USS Sulaco.

Samwell Stone disarming a PMC armed with an M39.

Concept art of the "M3A Submachine Gun". Note that the magazine is loaded with 45 rounds.

Concept art of Weyland-Yutani PMCs with one of them holding a black M39.

Zula Hendricks with a submachine gun that resembles the M39.