The M314 Motion Tracker,[2] also known as the Motion Scanner,[3][4] was a simple motion-detecting surveillance device. Essentially, it was a high-powered ultrasound scanner that used doppler-shift discrimination to filter out moving objects from stationary background and then displayed them on the M314's monitor as a series of contours of probable loci.

Although originally designed for use by rescue and police services, it went on to find use by the United States Colonial Marine Corps, who issued it as standard equipment as part of their Smartgun teams.

A moving object was shown on the M314 Motion Tracker's display as a series of contours of probable loci, with the range and bearing given to the target. Motion Trackers were often employed for perimeter surveillance, able to monitor movements of small animal-sized targets up to a range of 1,000 meters in open country.[5] The greatest advantage of the Motion Tracker was its ability to scan through objects; however, intervening terrain could cut this detection range quite drastically and, in built-up areas, the presence of walls and partitions could reduce the range to less than 20 meters.

While a powerful tool, Motion Tracker operators had to become familiar with the device's limitations. Primarily, it was incapable of differentiating between different sources of movement — an approaching hostile target would register just the same as moving machinery in the environment (although the Motion Tracker's range gate function was calibrated to reject small or slight movements, such as bugs crawling, plants waving in the wind, etc.).[5] While Colonial Marines were equipped with an Identification Friend Foe (IFF) transponder as part of their armor, designed to render them "immune" to the Motion Trackers carried by the USCM and thereby preventing false detection of friendly personnel, this technology was liable to malfunction on occasion.[6] The M314 also had a limited field of vision, and would only detect movement in the direction it is pointed, leaving large areas unchecked, particularly to the rear.

Further technical drawbacks were also inherent in the design. The devices were active sensors, emitting thousands of high-energy ultrasound bursts every second, and could therefore be easily located by enemy listening stations and serve as a target for enemy fire. Furthermore, the fact Trackers were set to ignore small movements in the environment left them unable to detect very slow-moving objects; this shortcoming was notably exploited on many occasions by guerrillas during the Arcturan War, allowing them to infiltrate a Tracker's detection cone.[5] Lastly, Trackers were vulnerable to spoofing by ultrasound jammers, or "jumping jack" decoy devices.[5] As a result, most commanders preferred to employ Motion Trackers only in support of traditional surveillance techniques.

Later variants of USCM standard armor included integrated motion trackers, thereby leaving a Marine's hands free to ready their weapon.[7] The armor-integrated motion tracker appeared in the corner of a Marine's head-up display and its appearance was very similar to what was displayed on the screen of the handheld tracker. The HUD motion tracker functioned the same as the handheld M314, with a moving object shown on the tracker's display as a series of contours of probable loci and with the range and bearing given to the target. The HUD motion tracker would also display the direction of an objective that the user had active.

In addition to tracking enemies, the Motion Tracker in Aliens: Colonial Marines is also able to detect dog tags, audio logs and legendary weapons. Though they'll have a unique icon when they are detected, the tracker itself will not emit any sounds.

The Motion Tracker didn't appear in the September 21, 1983 Alien II treatment by David Giler, Walter Hill and James Cameron;[8] it first appeared in the February 26, 1985 Aliens "First Draft" by Cameron[9] (the very next version). As in the final film (and most media following it), the Tracker is only ever referred to as simply the "motion tracker" or "tracker" in the scripts.[9] It wasn't until the release of Aliens: Infestation in 2011 that the Motion Tracker was given the name "M314 Motion Tracker".[2] The designation bears a notable resemblance to the M134 Minigun's, although this is likely coincidence.

It is possible that James Cameron named the planetoid in Aliens "LV-426" because he saw the original Kango hammer drill casing used to make the props and liked the sequence of numbers on its side, model number 426.[10] However, this seems somewhat unlikely as "LV-426" first appeared in the February 26, 1985 script; Aliens began filming near the end of 1985,[11] meaning that the props for the film likely would have been constructed long after February.

The Motion Trackers were made by prop master Terry Reed of Otter Effects; several were made.[10] Many Hama camera parts were used in their construction because Reed's local camera shop sold a wide range from the brand.[12]

When shooting the "sonar rings" in 1986, technology didn't exist that allowed for a compact video monitor to fit inside the Tracker's monitor, so the filmmakers affixed cathode ray tube monitors to the side of the Motion Tracker prop.[10] However, because it was a CRT, the screen was much deeper than the non-functioning monitor, so the functioning monitor could only be shot from certain angles.[10] If the monitor wasn't held exactly flat on to the lens, the bottom of the tube would become visible.[10] However, the length of the unit can still be seen briefly during the scene in which the Marines first use the trackers in the colony complex.[13] The playback was via a VTR off stage. The person who designed and operated the Motion Tracker insert video clips was also the one who made the 'Soundfire' system for Alien War.[10]

For long shots of the trackers, a simple blinking light was fitted inside the screen box.[13]

The tracker which appeared in Aliens: Colonial Marines Technical Manual was a copy made by Terry Reed for Lawrence Nathan of Fiction & Fantasy Models in North London in early 1990. Resin casts of this were made available.[13]

The main component of the Motion Tracker is the casing of a Kango 426 drill,[14][15] with extra parts as follows:

Master Replicas "tracked" down several German photographic retailers while the replica was being researched, and was able to locate all the original components except for the pump housing, which the product engineers designed from scratch in Pro-E. The body and details were all done in injection ABS plastic (with some metal parts). They also apparently added steel weights in strategic locations to give it some heft and balance.[10]

The Motion Tracker is powered by three AA batteries in the Hama viewer housing. The battery door is hidden under the flash plate part on the bottom. To operate the replica, there is a trigger switch located under the handle. The switch matches the black color of the original drill and functions as an on/off trigger for the electronics housed in the Hama viewer. Once turned on, the sequence and the sonar rings immediately start popping out from the center. After 5 or 10 seconds, Aliens start coming in at you. As the Aliens "approach", the unit pings louder and louder, culminating in a loud crescendo. The noise for the audio comes out through a speaker positioned in a hidden area in the main body. However, the range numbers don't count down. There are seven pre-programmed sequences (some have one pulsing Alien and others have much more which sometimes "hop back and forth" before they actually reach you). After it plays through 3 or 4 of these scenes, it just goes to "tracking nothing" mode for 30 seconds and then automatically shuts off. For the sounds of the replica, Master Replicas was supplied with sound effects from 20th Century Studios.[10]

Of curious note is the the rising tone "scale." The problem stems back to the film itself: careful viewers note that we never see one Tracker go through the entire "tracking" sequence. Since the Aliens themselves rarely come at the characters in one straight line, the result is a rising sound "scale" that may sound different from memory. Upon several repeated viewings by the Master Replicas design team, it was decided the trackers did in-fact go through a scale, the viewers just never notice it in one-continuous-shot (like the replica plays through). The tracker starting tone is different in various scenes due to the fact when the Marines first "read" an incoming Alien, they are at different distances from the Tracker user, thus the different pitches. It makes sense that the pitch tones themselves are apparently linked to a distance, therefore, if an Alien is close, the Motion Tracker in the film starts on the note "fa" instead of "do" for example. The sound played for the unit is tone-matched to the starting and ending notes, and divided the difference into seven equal pitches, hence the "scale" do-re-mi-fa-so-la-ti-do.[10]

In research and development for over a year, Master Replicas invented a unique approach to replicate the glowing sonar rings that ping out as the Motion Tracker is switched on. Drawing from their experience with their highly successful Star Wars Force FX lightsabers, the organic LED technology has allowed Master Replicas to cost effectively produce a functional prop replica at a price point affordable to most collectors.[10]

The unit comes with a full sized plexi display case similar to those constructed for their Star Wars and Star Trek replicas. A plastic placeholder affixed to the base holds the unit securely in place in the center of the display.[10]

Only the Collector's Club Exclusive version of the McFarlane "Colonial Marine Cpl. Hicks" figure includes a Motion Tracker accessory. It is separated from the figure in the packaging and can be placed in the figure's hand or slung over its shoulder with the sling. Unlike the later NECA Motion Tracker, the McFarlane version's monitor is tilted, but doesn't have any detail on the screen.[27]

A Motion Tracker accessory is included with NECA's "Private William Hudson", "Corporal Dwayne Hicks vs Xenomorph Warrior" and "Private William Hudson vs Xenomorph Warrior" figures. As previously mentioned, the screen is not titled. The screen does, however, feature a sticker which shows the the Motion Tracker detecting multiple signals. As with the McFarlane version, the Tracker can be placed in the figure's hand or slung over its shoulder via its sling.[29][30][31]

A Marine holding a Motion Tracker in an early Aliens: Colonial Marines photo. 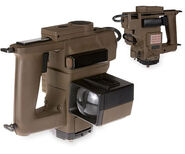 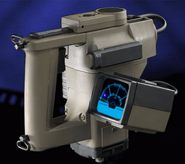 .gif file of the motion tracker's readout, no targets detected.

Ditto, from another angle.[33]

The handle of the M314 prop.[36] Note that some of the green paint is chipping off of the bottom of the handle.

The bottom of the prop's monitor.[39]

The handle and monitor.[43]

The sling mount on the top of the handle.[44]

The sling mount on the bottom of the handle.[45] 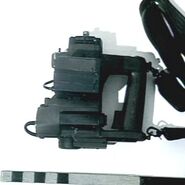 A behind the scenes picture of the prop[48] published in Sci-Fi & Fantasy Models International #21 (July 1997). 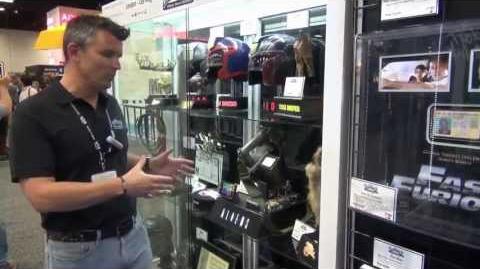 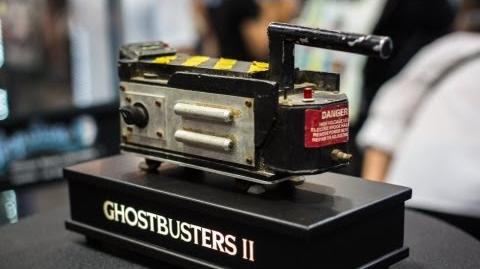 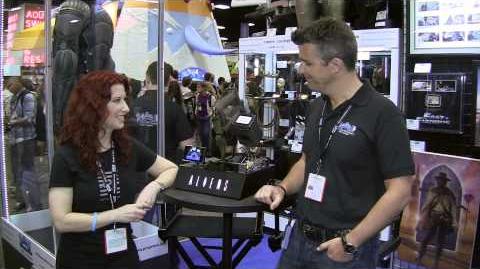 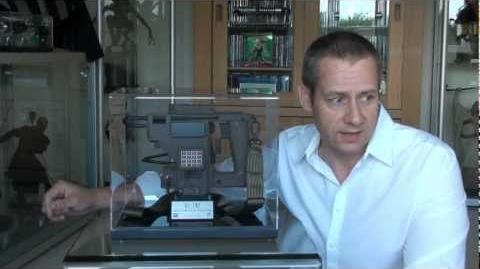