Weyland-Yutani Corporation[2]
The M240 Incinerator Unit,[3] also known as the M240 Flamethrower (or M240 Flame Thrower) and colloquially as the Bake-a-Flake,[3] is a carbine-style flamethrower employed by the United States Colonial Marine Corps. The weapon could be supplied with fuel either through canisters attached to the weapon or a direct main supply.

The M240 Incinerator is designed for use in close combat at the squad and fireteam level. It uses ultra-thickened napthal fuel as a base, stored under pressure and ignited by a nozzle burner as it leaves the weapon's barrel, and is capable of shooting a stream of flame up to 30 meters, although this range can be extended by firing the flame upwards at an angle, causing the stream to arc down onto a target.[3] Fuel is stored in an underslung reservoir tank that can be unscrewed and replaced to reload the weapon relatively quickly.[3] The weapon can also be fuelled from a large-capacity backpack tank worn by the operator, which is connected to the weapon by a hose leading to the reservoir attachment point (the reservoir is removed in this configuration).[4] The weapon itself is 88 cm long and weighs 2.7 kg with a full reservoir. A valve at the rear of the incinerator controls the fuel/air mix being sent through the barrel, allowing the weapon to be adjusted for use in oxygen-poor environments.[5] A thumb switch on the pistol grip ignites the nozzle burner, while the weapon is fired by squeezing the hand grip trigger, and will continue to fire until the trigger is released.[3]

One alternate mode of fire available to the operator is a so-called "wetshot", where the Incinerator is fired with the nozzle burner switched off and a stream of liquid fuel is sprayed at the target. This fuel has a tendency to partially vaporize, and a subsequent shot with the nozzle burner switched back on can ignite this vapor cloud to create an intense fireball.[3] Another option is a blind angle burst, often used in close quarters fighting in an urban environment — the flame burst from the M240 can be 'bounced' off of walls or other solid surfaces to attack enemies out of the line of sight.[3]

The M240 is undoubtedly one of the most fearsome weapons in the Marine inventory, and has proven especially useful in close combat against soft targets. It is also ideal for use against fortifications — flame can be directed through defensive apertures, causing both direct incendiary damage and also burning up the enemy's oxygen supply, causing incapacitation or death by asphyxiation. Its primary limitations, as with all flamethrower weapons, are its limited range. It has also been known for the unit to detonate catastrophically when the fuel reservoir is struck with certain types of incendiary ammunition.[3]

The thickened fuel fired by the M240 has a tendency to stick to targets as it burns, continuing to heat even non-flammable targets after the incinerator itself has ceased firing. The fuel is difficult to extinguish, and as a result a commander must carefully consider the tactical situation before authorizing the use of flame. The amount of kindling and burnable materials and/or debris in the environment must be assessed to prevent unintentional fire hazard. It is especially important to note that naked flames should not be permitted in any pressurized environment with a high oxygen content.[6] This potential for unwanted collateral damage is a serious constraint on the use of incendiary weapons like the M240.

There were a number of different versions of this weapon made for filming, each used for particular requirements on set. Unlike the rest of the film's arsenal, the flamethrower is more of a custom fabricated prop and is not based on any existent military hardware. The props were built by special effects supervisor John Richardson.[7] Much of the weapon is based on parts from the M16 assault rifle — the main body consists of the upper receiver assembly of an M16A1, cut into two and spliced back together, the carrying handle facing forward, and the section with the ejection port turned backwards. The front section of the weapon, meanwhile, is an M203 grenade launcher frame painted in Humbrol Brown Bess (the same color as the film's Pulse Rifles and sentry guns).[8][9]

Additionally, the small piece on the end of M240 is a brass coupler labeled with "THE HANSEN MFG. CO. CLEVELAND, OHIO U.S.A. * SERIES * 4-HK *"[10] and the vertical ridges on the "funnel" of the flamethrower's tank are believed to be model train tracks.[11]

The functional flamethrowers used in filming were built by senior special effects technician Nick Finlayson. Some of these weapons were actually military-spec liquid-fueled flamethrowers, as opposed to the vastly more common (and far safer) gas-powered models usually seen in films, although some gas-burning models are also used in the movie, usually in scenes with actual actors using the weapons. The liquid fuel flamethrower is most notably seen in the sequence where Ripley incinerates the Hive in the Atmosphere Processing Plant near the end of the film. 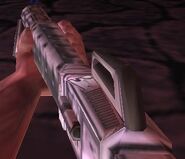 The M240 in Aliens versus Predator.

The M240 in Aliens versus Predator 2. 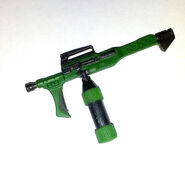 The "PAINTED" version of the Incendiary Weapon sold by Marauder.com.

A 'Bishop-model android on Epsilon Station brandishing an M240 in Alien: Bloodlines.

A flamethrower screen-used in Aliens.[15]

Production still of Apone armed with Frost's flamethrower inside the Hive on LV-426. Also note the Marine in the background with an M240 and the front of a Smartgun to the right.

Production still of Frost armed with his flamethrower inside the Hive on LV-426.

Production still of Dietrich armed with her flamethrower inside the Hive on LV-426. Also note the VP70 to the left.

Production still of a Warrior and Drake firing his flamethrower in the background.

Production still of Dietrich armed with her flamethrower inside the Hive.

Production still of Dietrich being captured by a Warrior while holding her flamethrower inside the Hive.

Production still of Dietrich and Frost armed with their flamethrowers inside Hadley's Hope.