The M10 Pattern Ballistic Helmet[2] was a helmet used primarily by the United States Colonial Marine Corps in conjunction with the M3 Pattern Personal Armor. In addition to providing head protection, it featured an integrated video camera, infrared sight, transmitter and microphone.

M10s (with and without helmet covers) were notably used by 2nd Battalion Bravo Team from the USS Sulaco when they were deployed to the colony Hadley's Hope on Acheron to investigate a loss of contact with the colony. The helmet was also later used by the crew of the USS Sephora when they responded to a distress call sent 17 weeks earlier by the Sulaco.

The M10 helmet is constructed from a similar layered composition to the M3 Pattern Personal Armor, consisting of outer layer of titanium-alumide alloy, a core of boron carbide resin bonded to a layer of graphite-composite carbon fibre and a woven Venlar liner.[3] While offering little protection against direct hits or strikes from high-velocity or armor-piercing ammunition, the M10 will readily withstand hits from less powerful rounds, glancing blows and grenade or artillery fragments.[4]

The helmet incorporates the individual Marine's Personal Data Transmitter, consisting of a PRC 489/4 transmitter that broadcasts the vital statistics monitored by his or her M3 armor vest to the tactical command center, and also features a full-motion video camera mounted on its right side, an audio microphone and an Identification Friend Foe (IFF) transmitter.[2] In addition, the helmet also mounts a passive infrared sight that flips down over the right eye when in use. This sight displays infrared images from the thermal imaging facility built into the tactical camera, superimposing them over the background as a head-up display.[2]

A helmet cover with the same camouflage pattern as the USCM's 'warm, temperature' BDUs was available for the M10. The back of the cover featured the last name of the Marine it was assigned to, much like how the M3 also featured the assignee's name. Also available was a scrim band that could go over the helmet cover or the bare helmet.[5]

The M10 helmets the Marines wore in Aliens were made from M1 "steel pot" helmets,[7] which were standard issue for American combat personnel during World War II, and later during the Korean and Vietnam Wars,[8] with added aluminum plates and flaps.[7]

The ear piece on the helmet was made with an Itex Ear Defender No. 212, which was first manufactured by Itex Safety and then by Stephans-Itex, before being discontinued. Some helmets (including at least one of Private Frost's) had their Ear Defenders mounted upside down, making the circular logo on the Ear Defenders visible in some scenes.[9]

The microphone used on the helmet is an M560, which was also used (attached to a Beyerdynamic Headmicrophone HM 560 headset) on the Head Mounted Sight props used by Privates Vasquez and Drake.

Certain helmets were equipped with functional microphones, which were used in conjunction with radio transmitter packs to record dialogue.[7] The transmitters were housed in pouches attached to the underside of the neck flaps, made from the same camouflage cloth as the Marines' BDUs,[7] which was was printed specifically for Aliens and had a small print repeat of 38 cm x 31 cm.[13] Other helmets (including Harris' Hudson helmet) used a dummy microphone, with a brass boom, capsule and counterweight cast in resin.[7]

The mechanism for the drop-down infrared sight, which is made from varying types of hard plastic,[10] consisted of 2 bulbs, a battery connector, plastic guide rails connected via a metal plate, a wire "switch" and an elastic band. The elastic band ran around the outside of the inner liner, held in place by a rivet at one end. The band held the plastic guide rail in tension against the infrared sight to keep it stowed inside the helmet. When the wire switch attached to the liner pushed against the guide rail, the elastic band stretched and the guide rail moved to such a position that the sight fell down. In the deployed position, the bulbs in the top of the sight completed their circuit with the metal that connected the guide rails, lighting them up.[10] However, not all of the helmets were equipped with the illuminated drop-down eyepiece, and consequently they seem hard to find for collectors of props.[14]

According to Cynthia Dale Scott (Corporal Dietrich) at the 2011 convention Alien Encounters, "And the helmets, some of the helmets were actually wired for real video cameras, 'cause, originally, if you remember, you see the video monitors in the film of what we're seeing on our patrol. Well, Jim [Cameron] had wired some of the cameras for some of the helmets for real video cameras, 'cause he wanted that to be actual live shooting, and it didn't end up working, but the video cameras stayed in some of our helmets, so they were really heavy and I got killer headaches from that- from that helmet."[15]

In Alien: Isolation, Seegson Security members can be seen wearing white, riot-style armor and helmets obviously inspired by the M3 and M10.

Hicks looks back at Ripley wearing his M10.

An M10 in Aliens: Colonial Marines.
Add a photo to this gallery

A behind the scenes picture of the front of one of Private Frost's helmet props.[1]

The inside of the helmet. Note the "FROST" tag.[1] 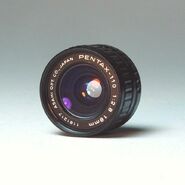 An advertisement for safety products, including the Ear Defenders.[9]

An ad for Itex products, including the Ear Defenders.[9]
Add a photo to this gallery

Retrieved from "https://avp.fandom.com/wiki/M10_Pattern_Ballistic_Helmet?oldid=252028"
Community content is available under CC-BY-SA unless otherwise noted.