Lord was an Ancient Yautja buried inside the Pyramid on BG-386. He was a direct ancestor of Dark and was the very first Predator to successfully hunt the Xenomorph species.[1]

Lord was the first ever Yautja to claim victory over the Xenomorph "Serpents".[1] As a result, he became the most revered and respected hunter of his time. His fame was such that even thousands of years later, he was still remembered by Predator elders.[1]

After his death, Lord was buried in a large Yautja Pyramid built on BG-386, alongside the body of the first Xenomorph Queen ever captured by the Predators. His technology, including his elaborate bio-helmet and his wrist gauntlet, was scattered throughout the temple grounds on the planet.

One of Lord's descendants, Dark, journeyed to BG-386 to originally discover a Youngblood Pack's fate, but was forced to retrieve a stolen Predator Wrist Bracer from a Weyland-Yutani Research Lab. The young Elite previously acquired Lord's helmet, and witnessed a holographic projection of the first victory against the Serpents, with Lord killing this Xenomorph Warrior. Dark also discovered and later was ordered to eliminate an abomination on BG-386 — a Predalien, created from an elite predator Specimen 6 harvested. He descended to the pyramid where his great ancestor was buried, and witnessed a holographic projection of the funeral procession for Lord. Dark reached the very sarcophagus of Lord, and placed the stolen Wrist Bracer on the sarcophagus, set to self-destruct. Dark was ambushed by the Predalien, and fought it in the arena below Lord's burial chamber. Although the Predalien possessed talents of Predators and Xenomorphs, Dark defeated the creature. In a manner similar to Lord, Dark threw his prey's corpse in disgust after defeating it.

Lord's statue as it watches over the Yautja ruins. 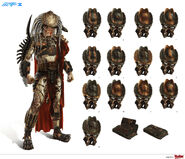 Concept art of Lord, his bio-helmet and Wrist Computer.

Concept art of Lord's Wrist Computer.
Add a photo to this gallery

Retrieved from "https://avp.fandom.com/wiki/Lord?oldid=248772"
Community content is available under CC-BY-SA unless otherwise noted.