Sacrificed herself to destroy the USS Legato in 2179.

Lisbeth Hutchins was a colonist who, in 2179, was kidnapped while in hypersleep by the Weyland-Yutani Corporation and taken aboard the USS Legato, presumably for the purpose of Xenomorph experimentation or breeding.

Lisbeth was impregnated with a Chestburster on the Legato, but before she died as a result of the birth she activated the ship's self destruct system and destroyed the vessel, killing all the remaining Weyland-Yutani personnel and Xenomorph specimens on board.

"Have you seen your parents?"
"No, first thing I remember is you finding me here."
―Ethan and Lisbeth on the Legato (from Stasis Interrupted)

At some point prior to waking on the Legato, Lisbeth was taught to shoot by her father. In 2179, Lisbeth and her family, along with her friend Ethan, set out as colonists. They were all abducted at some point by Weyland-Yutani to be used for Xenomorph research aboard the Legato.

Waking on the Legato

"The destruction of the Legato at the hands of some angry little girl: inconvenient."
―Weyland to Hicks, regarding Lisbeth (from Stasis Interrupted)

After being taken aboard the Legato in stasis by Weyland-Yutani Lisbeth woke with a Facehugger attached to her face. After removing the Facehugger and getting up off the floor, she saw a female colonist being burned alive by a Weyland-Yutani PMC with an M240 Incinerator Unit. Ethan pulled Lisbeth into cover and she expressed concern over him having a Facehugger on his face but he dismissed it. After being asked what was happening, Ethan explained that they were abducted during hypersleep and then asked Lisbeth if she had seen her parents to which she said she hadn't.

He told her that they were probably still in hypersleep and that she needed to find a way off the Legato. Lisbeth protested, wanting to find her parents but Ethan repeated himself before falling over onto the floor coughing up blood as the Chestburster gestating within him erupted out of his chest and scurrying off as Lisbeth watched in horror.

Lisbeth then cautiously moved ahead, looking for her parents. A pair of Facehuggers subdued two PMCs that were hunting down colonists before Lisbeth encountered a Remote Sentry Turret emplaced in a hallway. She sneaked up behind it and disabled it. She then stealthily moved past more PMCs and turrets, trying to not be killed like everyone else. The final turret she passed by was occupied with shooting Xenomorphs that were loose on the ship.

"What the hell is going on here?"
―Lisbeth to Andrews (from Stasis Interrupted)

Lisbeth made it to an elevator and traveled to one of the upper floors where she encountered two PMCs trying to fix a broken sentry turret. She used an engineering lift to reach and then traverse the upper supports of the room, using the crane operation controls on the other side and moving the crane to allow her to walk across it towards the exit. As she did this, Xenomorphs began to attack the PMCs, killing them both. Lisbeth took advantage of the situation to carefully make her way to safety, allowing the turrets to kill the Xenomorphs and then disabling one of them so she could reach the exit.

Once out of the room, she bumped into Andrews who watched a Lurker kill a PMC and then drag them into the vents. Lisbeth asked Andrews what was going on to which he responded the same as Ethan did prior. Andrews then revealed that he came with his girlfriend and asked Lisbeth if she was alone, to which she told him about her parents. Andrews then promised to help Lisbeth find her parents.

The two then entered a Weyland-Yutani lab and Andrews used a computer to locate his girlfriend and Lisbeth's parents after she told him her surname. He then told Lisbeth to pick up a headset so they could communicate and a motion tracker to find her way to her parents. Lisbeth inquired as to how he knew how to operate all the tech stuff and he told her about how he took late-night computer programming courses.

As Andrews tried to open the exit in the locker room they just entered, he heard something in the vents and quickly told Lisbeth to hide, doing so himself as well. A Drone jumped down into the room and almost discovered Lisbeth in her locker, but Andrews made a sound, alerting the Drone who then ripped the door off his locker and killed him with a Headbite.

"Thanks."
―Lisbeth to Stone (from Stasis Interrupted)

A Weyland-Yutani researcher entered the room shortly after and shot the Xenomorph dead. He motioned to open the locker Lisbeth was in but was punched dead by Samwell Stone, who's partner, Turk, then praised him on the punch. Stone noticed Lisbeth and asked her if she was alright, Lisbeth thanked him and Stone informed her that there was a Marine vessel attached to the Legato, with Turk adding that they were going to use it to escape.

Lisbeth said she was going to find her family and Stone pointed to the dead Xenomorph, noting that it would be best if they stuck together. The trio made their way through the Legato, disabling a turret and heading upstairs where they used an elevator to go down to the same level as the umbilical. As the elevator went down, something went bump on top, causing Turk to panic.

The three then encountered another sentry turret that was gunning down Xenomorphs, Lisbeth snuck around it and disabled it, allowing them to continue on their path. They made it to right outside the umbilical entrance, but it was being guarded by two Weyland-Yutani soldiers who were torching any civilians who tried to get off the ship. After Stone opened the door, Lisbeth used an open floor vent to access a conveyer belt with two Facehugger specimens in containers on top. Lisbeth activated the convey belt and sent the Facehuggers after the guards who were then subdued.

"Once I find my folks I'll — we will be looking to leave."
―Lisbeth to Stone (from Stasis Interrupted)

As the three survivors approached the now subdued guards, Stone picked up a gun and went to shoot the guards. However, Lisbeth stopped him, wanting them to suffer as her friend had. Lisbeth then picked up several firearms as Stone asked her if she knew how to operate them, following up with asking her if she had ever killed anyone after she said that her father had taught her how to shoot. Lisbeth was startled by this question and left it unanswered. Stone tried to convince Lisbeth to board the Sulaco with him and Turk, but she insisted on finding her parents.

Lisbeth then battled through swarms of Xenomorphs as she made her way outside the Hypersleep Storage, where a dead PMC was thrown down in front of her from above by Xenomorphs which then attacked her. After she killed them all, she headed toward the Hypersleep Storage and found a crying woman sitting next to two dead colonists, one of which had been host to a Chestburster. Lisbeth paid her no attention and continued on inside, passing by a woman who had been facehugged in the fetal position.

As she passed over the glass ceiling of the server rooms, she witnessed a Lurker kill a PMC by impaling him, she then made her way down through the server rooms and defeated two Lurkers before finally reaching the Hypersleep Storage soon after. She fought her way up to Level-3, Bay 4 of the Hypersleep Storage as all hell broke loose around her. Once there she discovered her parents were already dead, her mother was facehugged and her father shot dead.

Destruction of the Legato

"I'm blowing up the ship."
―Lisbeth to Stone (from Stasis Interrupted)

Lisbeth activated the self-destruct system and almost immediately after, succumbed to the Chestburster that was gestating inside her. A Lurker and several Drones soon arrived to watch the birth of their new sibling, the Lurker seemed to tell the Drones to leave as it moved to stand over Lisbeth as the Chestburster erupted from her chest. The Lurker, Chestburster, and Lisbeth were all then killed in the blast of the engines exploding.

"Love the attitude, but we're a little short on firepower here guys."
―Turk, to Lisbeth and Stone (from Stasis Interrupted)

Lisbeth was a determined and slightly arrogant individual, as displayed by her unyielding desire to find her parents despite all the imminent dangers, which suggests she does have a caring side. She was also quite the vengeful and cold person, as demonstrated multiple times where she completely ignored traumatized colonists, allowed the Chestbursters to gestate inside the PMCs when Stone wanted to mercy kill them, and deciding to blow up the Legato after finding her parents dead, which killed the aforementioned innocent colonists. As well as this, she showed little to no grief over the death of Ethan or Andrews.

"You ever use a gun before?"
"My father taught me."
―Stone and Lisbeth on her weapons handling experience (from Stasis Interrupted) 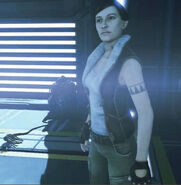 A Lurker and several Drones watch on as Lisbeth succumbs to her Chestburster.

Lisbeth moments before death.
Add a photo to this gallery

Retrieved from "https://avp.fandom.com/wiki/Lisbeth_Hutchins?oldid=256774"
Community content is available under CC-BY-SA unless otherwise noted.