"You're all gonna die. Only question is how you check out. Do you want it on your feet? Or on your fucking knees, begging? I ain't much for begging. Nobody ever gave me nothing! So I say fuck that thing! Let's fight it!"
―Dillon (from Alien3)

Leonard Dillon[1] was an inmate at the Fiorina "Fury" 161 Class C Work Correctional Unit, one of several who stayed behind after the facility was officially closed down by Weyland-Yutani. He was involved in battling a lone Xenomorph that was born in the prison in 2179.

Dillon acted as something of a religious leader and preacher among the remaining inmates, leading them in prayer and overseeing their social harmony.[5] When the prison's warden Superintendent Andrews was killed, Dillon became a reluctant leader for the survivors, despite initially refusing the role. He ultimately sacrificed himself to help kill the Xenomorph on Fiorina 161.

Dillon was born in 2138.[1] He was sent to Fiorina 161 for two counts of rape and first degree murder,[6] for which he was sentenced to life imprisonment.[1] In both cases, the rape victim was female.

"Take off. I gotta re-educate some of the brothers."
―Dillon to Ripley, after saving her from a gang rape attempt (from Alien3)

When Superintendent Andrews informed the inmate population of Ripley's arrival, Dillon was immediately concerned that the presence of an outsider, especially a female outsider, would cause problems at the prison. Despite these misgivings, when the bodies of Rebecca Jorden and Turk (mistaken at the time for Corporal Hicks) were cremated in the prison's furnace, Dillon offered an eloquent prayer (somewhat unexpectedly) to mark their passing. However, when Ripley attempted to thank him for his actions, he was hostile, making it clear that he would engage with her only on account of his religious beliefs, which required him to show tolerance to anyone.

When Junior, Gregor, William and another prisoner later attempted to rape Ripley, it was ironically Dillon — a self-confessed "murder and rapist of women" — who saved her, brutally beating the offending inmates with a metal pipe while Ripley made her escape.

"Hey sister, what about you? You're an officer. How about showing us a little leadership?""
―Dillon to Ripley, calling on her to take charge (from Alien3)

After the Dragon killed Andrews, many of the inmates turned to Dillon for leadership, although he rejected such suggestions, instead asking Ripley to take command, citing her previous experience as an officer. When a plan to use quinitricetyline to burn the Dragon from the prison's air shafts and drive it into a nuclear waste tank went disastrously wrong, it was Dillon who activated the sprinkler system to douse the huge fire, undoubtedly saving many lives.

Later, when Ripley discovered an embryonic Queen gestating inside her, she went to Dillon in his cell to ask him to kill her, unable to do the deed herself. He angrily refused, pointing out that her immunity to the Dragon might be their best asset in fighting the creature. After she continued to plead with him, he eventually agreed to help her end her life, but only after the Dragon was dead.

"God will take care of you now, sister..."
―Dillon, saying goodbye to Ripley (from Alien3)

With time running out before a Weyland-Yutani team arrived to capture the Dragon, Dillon and Ripley formulated a last, desperate plan — the prisoners themselves would act as bait in the hopes of luring the Xenomorph into the mold at the lead works, where it could be drowned in molten lead. Many of the prisoners initially refused to take part in such a suicidal scheme, but Dillon roused them into action with a spirited speech and the plan was put into motion.

Once the Dragon entered the fray, the situation quickly deteriorated and most of the prisoners were killed, forcing Ripley herself to become involved. Dillon eventually succeeded in luring the Dragon into the mold by pretending to attack Ripley (and therefore threatening the Queen embryo she carried inside her), but when they attempted to climb to safety, the Dragon simply followed. Out of options, Dillon remained in the mold alone, offering himself to the Dragon while Ripley escaped, and fighting the creature in his death throes to stop it from leaving the chamber. He died moments before Morse poured the molten lead onto the Dragon.

"Give us strength, oh Lord, to endure. We recognize that we are poor sinners in the hands of an angry God. Let the circle be unbroken, until the Day. Amen."
―Dillon, leading the inmates in prayer (from Alien3 Special Edition)

In the Special Edition, Dillon routinely led the other prisoners in prayer, both as a regular ritual and in response to the worsening situation they find themselves in once the Dragon is born. Before meeting Ripley for the first time in the mess hall, he admonished Boggs and Rains for their disrespectful behavior towards Golic, including openly insulting him even in his presence. When the Dragon was successfully trapped in a nuclear waste tank, Ripley informed him that Weyland-Yutani intended to capture the Dragon and take it away for study, an act that could potentially unleash the Xenomorphs on the entire human race, and that the survivors therefore had to kill the creature. However, Dillon was apathetic, not wishing to risk any more prisoners' lives, and not caring if the company destroyed themselves or the rest of humanity with their actions. Only when the Dragon was released from captivity by Golic did Dillon once again agree to fight it, realizing it for the threat it was.

"You don't wanna know me, lady. I'm a murderer and rapist of women."
―Dillon to Ripley (from Alien3)

Despite his insistence that he was a dangerous individual and someone Ripley should stay away from, Dillon gradually built up a genuine friendship and respect for her, his faith and her own personal strength no doubt playing a large part in this. In his role as unofficial religious leader for the inmates, he genuinely cared for his fellow prisoners, although he was quick to reprimand, either verbally or physically, anyone who upset the balance of the commune or broke the group's self-imposed vows. Most notably, he violently beat the men who attempted to rape Ripley, despite his own history with such offenses.

Despite his somewhat fatherly role amongst the inmates, Dillon initially welcomed the Dragon as a means of divine retribution sent forth by God, as foretold in their apocalyptic religion.[5] Also at odds with his concern for the men of Fiorina 161 was his total lack of it for the outside world; when confronted with the very real possibility that the Xenomorph would escape the planet and threaten the wider human race with slaughter, Dillon was apathetic.[5] However, these self-centered views later changed, doubtless as a result of Ripley's presence, and he became increasingly determined to exterminate the Xenomorph, even if only to avenge those it had killed. Dillon's distinguishing mark was the small scar on his left cheek.[6]

The character of Dillon was largely derived from an individual named Brother Kyle in Vincent Ward's unmade script for Alien3.

The way in which Dillon's character died changed several times throughout the production. In an early draft, Dillon (named Malcolm at this point) gave his life to distract the Dragon and prevent it from killing Morse in the assembly hall.[7] This was later modified as part of a deleted sequence where Dillon and Morse discover the Dragon has built a Hive in the assembly hall where many of its previous victims, including Andrews, are cocooned. Again Dillon sacrifices himself to save Morse, this time pushing him out of a door and locking it behind him before facing the Xenomorph alone.[7]

A later revision of the script had Dillon survive and escape the lead mold before Morse buries the creature in molten lead. As the Weyland-Yutani team arrives, Ripley asks Dillon to kill her, as he had promised, to spare her the birth of the embryo inside her. He prepares to strangle her, but finds he cannot bring himself to do it. At that moment the Alien emerges from the lead and drags Dillon back into the boiling metal, killing him.[7] This version of the scene appears in the novelization of the film,[8] as well as the comic adaptation.[9] 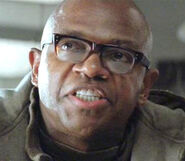 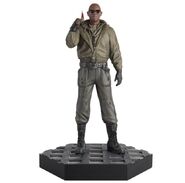 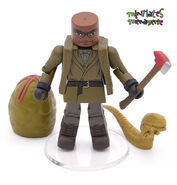 Minimates figure of Dillon.
Add a photo to this gallery

Retrieved from "https://avp.fandom.com/wiki/Leonard_Dillon?oldid=247994"
Community content is available under CC-BY-SA unless otherwise noted.