"It's Shorty, one of the novices. His height makes him a target for the others in the caste, and he's decided the "token" human should be the whipping boy for his anger."
―Machiko (from Aliens vs. Predator: War)

Lar'nix'va,[1] known as "Shorty" by humans, was a young Yautja in the Hunter clan that Machiko Noguchi joined after the massacre at the Prosperity Wells settlement on Ryushi. His human nickname was in reference to his shorter-than-average height.

Shorty was an un-Blooded young Yautja that stood a considerably shorter height than most. He was described as being "a head taller" than Machiko Noguchi, a human whom he held a grudge against. Because of his short statue, other Yautja pick on and push him around and he takes his frustrations out on Machiko, despite her being a higher rank.

Led by Top-Knot, the clan goes on a queen hunt, with the intention of capturing a queen to seed other planets with for future Blooding rituals. They infiltrate a Hive and Shorty begins showboating in front of Noguchi and stealing her kill. However, his lack of attention almost costs him his life, as a Drone sneaks up on him. It is about to kill him, but Machiko kills it first, not only robbing the hunter of an honorable death, but humiliating him in front of his fellow hunters. From that day forth, he seeks to tear Machiko down.

After offending a high ranked predator, Machiko is placed up against Shorty in a one-on-one match to see if she is truly worth her rank as a blooded warrior. Her agility, speed, and strategy to use the Yautja's weight against him works at the beginning of the fight, but things take a turn for the worst when other spectating predators cheat. He manages to get a hold of her, twists her ankle and knocks her dizzy by slamming his much harder skull into her own, then throwing her out of the ring, winning the fight. For this loss to a lower ranked novice, Machiko is discharged from the Hunt on Bunda.

Later, after betraying the hunters and re-integrating herself with humanity on Bunda, Shorty and Machiko meet again. This time, however, it is a fight to the death. Shorty and fellow hunter 'Freckles' attack Machiko, but Machiko's superior skills as a warrior results in her killing Freckles, leaving her and Shorty in a brief battle. Without his comrades to assist him, Shorty is powerless against Machiko and bisects his left hand with her Wristblades after deeming him a "bully" and that she is a more worthy hunter than he is. Shorty calls her a "human" in retort, and Machiko admits that although she is indeed a human and that she would consider it wrong to kill him, the hunter side of her knows its the only smart thing to do. She then plunges the blades into his chest, ending him.

Shorty was ill-tempered and impish, the former due to being bullied and pushed around by his larger, same-aged peers. He is also described as "young and stupid". In an attempt to feel some superiority, he singles out and torments Machiko, the only one smaller than he is. His bigotry towards her is the most obvious and the worst of the class and he wasn't above using underhanded methods to get over on her. Shorty was very easy to anger, impulsive like most young hunters, and this eventually spells his downfall. 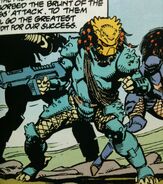 Shorty in the first series of Aliens vs. Predator: War.

Shorty on the right next to Top-Knot.

Retrieved from "https://avp.fandom.com/wiki/Lar%27nix%27va_%22Shorty%22?oldid=260104"
Community content is available under CC-BY-SA unless otherwise noted.