Alien3
Lance James Henriksen (born May 5, 1940) is an American actor and artist who played Bishop in the 1986 film Aliens, "Bishop II" in the 1992 film Alien3 and Charles Bishop Weyland in the 2004 film Alien vs. Predator. He also voiced the original Bishop in Alien3, although the actual on-screen performance was provided by an animatronic dummy modelled after the actor.

One of the most prolific figures in the Alien, Predator and Alien vs. Predator franchises, Henriksen also lent his voice and likeness to the characters of Karl Bishop Weyland in the 2010 video game Aliens vs. Predator, another Bishop android in the 2013 video game Aliens: Colonial Marines, and Bishop II in Aliens: Colonial Marines and its DLC expansion Stasis Interrupted, and reprised his role as Bishop in the 2019 audio drama Alien III. He also narrated an abridged audiobook version of the novel Alien3, released in 1992. Other notable films Henriksen has appeared in include Damien: Omen II (1978), The Terminator (1984), Near Dark (1987), Hard Target (1993) and The Quick and the Dead (1995). He is also known for his starring role as Frank Black in the television series Millennium (1996-1999).

Henriksen has been nominated for three Golden Globes. He is often said to be one of only two actors (the other being Bill Paxton) who has been killed on-screen by an Alien, a Predator and a Terminator (although some argue that Henriksen's character Bishop in Aliens was not killed by an Alien, as he was technically still active after being ripped in two by the Queen). 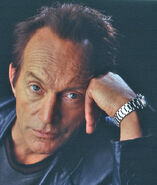 James Cameron-penned concept art of Henriksen as the Terminator.
Add a photo to this gallery

Retrieved from "https://avp.fandom.com/wiki/Lance_Henriksen?oldid=254068"
Community content is available under CC-BY-SA unless otherwise noted.