"I may be synthetic, but I'm not stupid."
―Bishop (from Aliens)

Lance Henriksen
Lance Bishop[10] was a Hyperdyne Systems[1] model 341-B[11] synthetic technician with the United States Colonial Marine Corps, assigned to 2nd Battalion Bravo Team.[12] He served as Executive Officer aboard the USS Sulaco,[2] and as such was part of the combat unit deployed to LV-426 in 2179, to investigate the sudden loss of contact with the colony of Hadley's Hope. He was subsequently involved in combating the Xenomorph infestation at the colony.

As a technician, Bishop was not part of the squad's combat personnel, although he used his non-combat skills to aid in the escape of the survivors from the colony. He survived the incident along with Ellen Ripley, Corporal Hicks and Rebecca Jorden, although he was seriously damaged and later deactivated at his own request.

Bishop was (allegedly) designed and created by Weyland-Yutani employee Michael Bishop.[8] Bishop modeled the eponymous android on his own appearance. Several Bishop models were issued to the USCM;[13] Bishop was eventually posted aboard the USS Sulaco as the ship's Executive Officer and the combat unit's technician.

While numerous other Bishop-type androids have been seen in the Alien franchise (several of which have posed as sleeper agents, actively concealing their android nature from those around them), it would appear that Bishop was among the first 341-B models produced.[citation needed]

"Trust me."
―Bishop to Hudson, before doing his knife trick (from Aliens)

Due to Weyland-Yutani and military regulations, Bishop was sent with the USS Sulaco Marines to LV-426 to record events and act as Science Officer.[3] Before entering hypersleep, Bishop attempted to develop a rapport with the Marines, but his attempts to inquire about their personal lives were met with derision. He learned that they were particularly fond of displays of power and Private First Class Hudson was particularly pleased with Bishop's prowess with a knife.

After waking from hypersleep aboard the Sulaco, Bishop was asked by Hudson in the mess hall to "do the thing with the knife", namely using his vastly superior android reflexes to perform the knife game at incredible speed. While he initially refused, continued goading from the Marines caused him to relent. Hudson was subsequently "volunteered" by Private Drake to be on the receiving end of the game, and with his own hand placed over the captive Hudson's, Bishop performed the trick at superhuman speed, much to Hudson's horror.

Despite an apparently flawless performance, Bishop actually nicked himself during the trick, thereby revealing to Ellen Ripley that he was an android. Due to her previous experience with the synthetic Ash aboard the USCSS Nostromo, she immediately became hostile, despite Bishop's insistence that newer models such as himself could never "malfunction" as Ash had done. Ripley remained unconvinced and threateningly insisted Bishop stay away from her.

During the drop on LV-426, Bishop drove the unit's APC.[7] Once Hadley's Hope had been secured by the troops, he joined them inside and began going through the facility's logs to try and ascertain what had happened to the missing colonists. He also found Marachuk's medical notes in the colony's med lab, and took a marked interest in the captive Facehuggers held there. He began dissecting and studying the dead specimens almost immediately. At this time, Weyland-Yutani representative Carter Burke informed Bishop that the two live specimens were to be preserved and shipped back to the company when the mission was completed. Bishop continued his work in the med lab while the bulk of the detachment moved into the Atmosphere Processing Plant in search of the surviving colonists, listening in on the Marines' frequencies during the disastrous ambush there.[14]

"I'll go. I mean, I'm the only one qualified to remote-pilot the ship anyway."
―Bishop, volunteering for a dangerous mission (from Aliens)

Following the loss of most of the unit and their dropship, Bishop initially focused his efforts on continuing to study the deceased Facehuggers, hoping to find some weaknesses that may help the survivors combat the Xenomorphs. He theorized that some form of Xenomorph the group had not yet encountered must have been laying the Eggs seen inside the Atmosphere Processor.

However, as events continued to conspire against the remaining personnel on the planet — especially when it was discovered the Atmosphere Processor was going to explode — Bishop realized that he would have to take a more active role in the situation if any of them were going to survive. As such, he volunteered to travel out to the colony's transmitter, alone and unarmed, in order to pilot the unit's reserve dropship to the planet surface. The plan was successful, but before they could leave Ripley insisted Bishop fly her into the Atmosphere Processor so that she could rescue Newt, the last surviving colonist who had recently been taken by the Xenomorphs. Despite the Atmosphere Processor exploding all around him, Bishop managed to stay on station until Ripley succeeded, then barely escaping before the Processor's reactor went critical and detonated, destroying the colony. In doing so, he helped to finally gain Ripley's trust.

Upon returning to the Sulaco, Bishop was suddenly and violently torn in two by the Xenomorph Queen, who had stowed away in the dropship's landing gear. Immobilized, he could only watch as Ripley fought the Queen using a Power Loader. When Ripley opened the Sulaco's cargo lock to expel the creature into space, Bishop managed to save Newt from being sucked out along with her, despite the damage he had suffered.

Following the event, Bishop was placed into hypersleep, along with the other survivors of the incident — Ripley, Newt and Corporal Hicks.

"I could be reworked, but I'll never be top of the line again. I'd rather be nothing."
―Bishop's request to Ripley (from Alien3)

Bishop was further damaged when the Sulaco jettisoned the survivors due to an electrical fire in the hypersleep bay and the Type 337 EEV crash-landed on Fiorina "Fury" 161. Turk (who was thrown into Hicks' cryotube) and Newt were killed in the crash, while Bishop's remains were deemed irreparable and dumped on the prison colony's scrapheap.

Ripley later reactivated Bishop in order to access the EEV's black box recorder, learning from him that there had been a Xenomorph aboard the Sulaco, that it was now on the planet with them, and that this information had been transmitted directly to Weyland-Yutani. After giving Ripley the information she wanted, Bishop asked to be disconnected, stating that while he could be repaired, he would never be the state-of-the-art android he once was; Ripley obliged him.[8] His remains were later retrieved by the Weyland-Yutani Bio-Weapons Divison that arrived on the planet to capture Ripley and the Xenomorph, headed by Bishop's designer Michael Bishop.[15] His lower half was later rediscovered aboard the Sulaco by Corporal Christopher Winter.

"It is impossible for me to harm, or, by omission of action, allow to be harmed, a human being."
―Bishop, to Ripley (from Aliens)

As an advanced model android, Bishop was designed and programmed to mimic humans in the closest possible way, although he also possessed inherently superior intellect and reflexes, and was able to create his own reactions to situations.[16] Core to his programming were the Three Laws of Robotics, which essentially made it impossible for him to allow harm to come to humans from either his actions or his inaction; in this regard he worked to aid the survivors of the LV-426 mission in their escape from the moon. In fact, despite his employment in the Colonial Marines, Bishop in fact considered himself to be a total pacifist.[17]

Bishop's behavioral software was so acute that he could emulate emotions effectively and engage with humans on a social level, and he was capable of learning and adapting his personality based on observation of others, as evident when he made a joke of Ripley's mistrust of androids following her defeat of the Queen aboard the Sulaco. However, despite his advanced programming, Bishop was beset with an inherent innocence that set him apart from his human compatriots.[18] Furthermore, he suffered from occasional tell-tale "glitches" that betrayed his synthetic nature.[7] Even so, Bishop greatly preferred to be treated as a fellow human by those around him.[19]

While ostensibly just a technician, Bishop doubled as the primary driver for the section's M577 Armored Personnel Carrier. He was also programmed to fly the UD-4 "Cheyenne" Dropship, and was also qualified to pilot the vessel by remote control.[7] Additionally, he was trained in the use of surgical equipment and possessed knowledge of biology and dissection procedures.

However, he did not carry any weaponry in the field, even refusing the Heckler & Koch VP70 he was offered by Private Vasquez to defend himself during his mission to the colony's transmitter array.

For Bishop's damaged appearance in Alien3, Amalgamated Dynamics, Inc. opted to use an animatronic dummy rather than makeup effects, to allow for more extensive damage to the android's head. The first puppet created proved unsatisfactory when it came to facial articulation, and thus was only used in wide shots from behind the head.[20] Later, when production was relocated to Fox Studios in Los Angeles, ADI built a second puppet that was used to film closeups of Bishop's face as he talks with Ripley. The second puppet was sculpted by David Anderson and featured mechanical internals by Dave Nelson, consisting of 25 individual servo motors.[20]

A severed Bishop on the front cover of issue 2 of Alien 3: The Unproduced Screenplay.

Ripley realizing that Bishop is an android.

Report on Bishop's condition upon arrival on Fiorina 161.

Bishop's "corpse" inside the EEV. 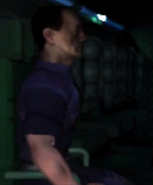 Lance Bishop, as he appears in Alien Trilogy

Bishop's lower body aboard the Sulaco.

Bishop (far left) and Turk during the fight in the cryo chamber. 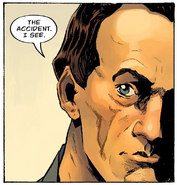 Bishop as he appears in Alien 3: The Unproduced Screenplay.

Bishop and the Egg growing from him in Alien 3: The Unproduced Screenplay. 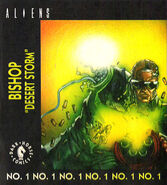 Bishop on the front cover of Aliens: Desert Storm. 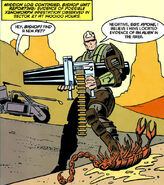 Bishop as he appears in the Kenner comics. 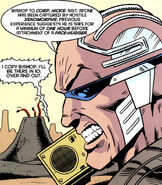 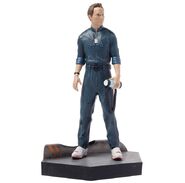 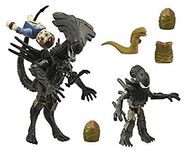