Monstrosity
The King, also known as the Monstrosity[1], is a large and rare form of the Xenomorph XX121 species, that are only known to exist in the largest of Xenomorph hives.[1] They are very similar to the Queen caste but are much more built for combat than the egg-laying Queen.

While known as a counterpart of the Queen, the exact role of the King is unknown. As Ovomorphs do not need to be fertilized, it is unlikely to be a reproductive caste. Most evidence would seem to point to the King being a commander caste like a Praetorian that would act as a hulking field commander for the lesser castes. It is unknown how a King is created and why they only exist in the largest Xenomorph hives.

Much like its Queen counterpart, the King possesses a large head crest, which is much more ornate than the Queen's. Parallel to its jaws, a pair of tusk-like protrusions jut out of its crest, though they seem too small to be used offensively. The King is also much more rigid and bulkier looking than his "female" counterpart. Another difference is the lack of ventral arms that Queens have.

Much like several other castes of Xenomorphs, the King is capable of spitting acid, which is known to be extremely corrosive. It possesses large talon-like claws and a powerful tail which allow it to tear through even the armor of tanks. Its tail possesses rows of spines similar to the scutes of a crocodile instead of the single row of most Xenomorphs. The King also possesses two barb-tipped tail-like structures on either side of its four dorsal spines. Its regular dorsal spines possess a shape similar to most normal Xenomorphs, and not the spike-shaped spines of the Queens and other related castes.

The King ranges in height from slightly taller than a Queen to towering several stories over its smaller brethren. It has been noted that the King possesses enhanced regenerative abilities, specifically linked to the consumption of its enemies. It is also said to be fairly mobile and fast moving for something of its size.[1][2]

Working in direct partnership with Legacy Effects, the artists and nightmare makers behind the creatures and Queen from Aliens, Sideshow Collectibles created the King Alien maquette to celebrate the 30th anniversary of the Alien franchise. The King design was intended to be much more masculine than the feminine design of the Queen.[2]

This iteration of the King would make its first debut in any franchise media with a 2018 expansion to the Prodos Games board game, AVP: The Hunt Begins. In this appearance it received some more information about its abilities and behavior, as well as being massively up-scaled to be as big as a Queen Mother (if not bigger).

A 'King' Xenomorph first physically appeared in Kenner Products' 1992 Series 4 of its Aliens toyline. This version of the creature stood more upright and instead of a crest, featured a pair of large mandible-like appendages that when resting, formed the shape of a crest on the head. It was predominantly green in color with black limbs and lower torso (although there was also a black and silver reissue).

Other physical distinctions include tusks very similar to those of the Sideshow Collectibles maquette, large blade-like hips and a bulbous sack for a tail which stored acid that it could spit in streams out of its mouth.

The idea of a "King" Xenomorph first appeared in the 1990 unproduced script for Alien3 by Vincent Ward. While being completely different in its design and nature, it is said to be able to spit acid much like the Sideshow Collectibles and Kenner Kings. This version of the King could also implant Chestbursters directly into victims and was able to camouflage itself similar to a chameleon.

The 1993 comic book Aliens: Rogue featured a genetically engineered human/Xenomorph hybrid called the Rogue that was also referred to as a 'king'.

Close up of the head, showing the particularly ornate head crest.

Side by side with a Queen. 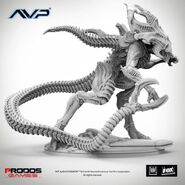 The Prodos model with the pincer in perspective. 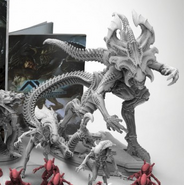 The colossal size of the Prodos Games figure. 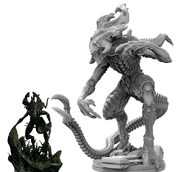 A scaled image of the Sideshow maquette and Prodos game-piece. 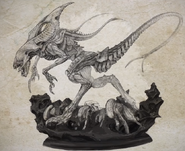 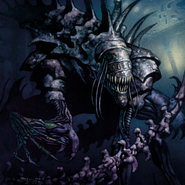 The 'Rogue', also referred to as a 'King Alien'.

Concept art of a King Alien, by Scott Pikulski, from Aliens: Extermination.[3]