The Killers were a Bad Blood clan of Yautja who were considered heretics by the mainstream Hunter Yautja. This was because the Killers did not engage in standard hunting practices but instead sought only to kill rather than hunt, which many Hunters found no honor in. The hunt is sacred to the Hunter Predators so this focus on killing was considered deplorable. This led to a conflict between the two groups; a war which was believed to have destroyed the rogue clan. Following that event, the story of the Killers became a myth amongst the normal clans.

However, the clan was not destroyed and continued to operate in space where they raided as well as destroyed any colonies they discovered. As part of their operations, they made use of Xenomorphs as hounds to hunt down their targets. One of their raids led to the destruction of a Human colony but not before footage of the incident was recorded by the military. They later approached Machiko Noguchi and after watching the video, she revealed the existence of the Killers to the marine forces.

In East Africa during what can be assumed, judging by the level of technology, was the 21st century a group of killers interfered with a military conflict between several unnamed parties only to say that one of them was a mercenary contracting group called Graham Directive Security. The Killers were bent on killing the members of Graham. Though incredibly lethal they did not succeed in this goal though they did manage to kill the vast majority of them. The remaining few were saved by an airlift out of the area.

The Hunter Clan led by Machiko Noguchi teams up with the United States Colonial Marine Corps to wage a war against the Killer clan due to the Killer yautjas destroying outer human colonies.

The Killers have some technologies and devices which are not known to be used by Hunter Predators. The Killers have trained Xenomorphs and use them in a way which is akin to attack dogs. Also, the Killers have some kind of jamming device which acts like a kind of continuous EMP, where it inactivates all high technology, including anything guided by a computer and communications equipment. Their armor is also quite different from that of Hunter Predators. Their body protection resembles something closer to a full chest plate, and their biohelmets have extremely ornate headpieces, and feature removable face plates while still maintaining the majority of head protection. Almost universally, their armor maintains a uniform color scheme consisting of black to dark grey, sometimes with red highlights. 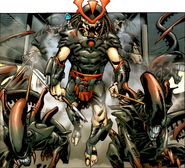 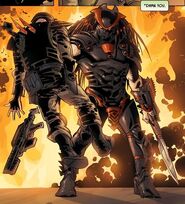 A Killer Yautja as he prepares to bring death to his blooded counterpart. 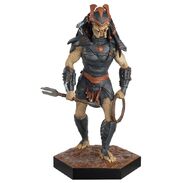 Eaglemoss Collections figurine of a 22nd century Killer Yautja.
Add a photo to this gallery
Retrieved from "https://avp.fandom.com/wiki/Killer_Yautja?oldid=230916"
Community content is available under CC-BY-SA unless otherwise noted.