"Please don't be alarmed and please don't use the term "artificial person". I prefer to be called what I am — an android."
―Katya (from Aliens vs. Predator)

Called in Colonial Marines to deal with Xenomorph infestation.

Katya was a Line No. WY-763-00-02[2] synthetic employee of the Weyland-Yutani Corporation and the colonial administrator in charge of the Freya's Prospect colony on BG-386. She was the person who sent a distress signal to the United States Colonial Marine Corps following a major Xenomorph outbreak at the research facility on the planet. She was one of only three people known to have survived the incident, the others being Rookie and Corporal Tequila.

Katya was the administrator at the civilian colony of Freya's Prospect, although she also has knowledge of and works at the Weyland-Yutani research facility on the planet and often spent time there. Katya was in the research laboratories when Specimen 6 instigated a major Xenomorph outbreak by freeing the Matriarch, and it was she who sent a distress call to the USCM. While she survived the initial outbreak, she was badly damaged; when Rookie later encountered her, much of her outer covering and clothes had been stripped away around her waist and right side, leaving her internal mechanisms exposed. However, she managed to effect hasty repairs, literally strapping her internal mechanisms in place using belts of fabric, and her performance did not seem to be adversely affected.

"If you can get the Corporal to me, I might be able to remove the parasite."
―Katya to Rookie, regarding Tequila (from Aliens vs. Predator)

When Rookie was stranded after Corporal Tequila was shot down aboard the dropship Typhoon, Katya contacted him and guided him to the Yautja ruins on the planet so that he could rescue her. She later guided to two of them to the Weyland-Yutani labs, telling them that she might be able to save Tequila's life by removing the embryo safely. While the Marines made it safely, Karl Bishop Weyland interfered when Katya attempted to perform the surgical operation using remote equipment, and she suggested Tequila be placed in hypersleep to save her life.

Following this, Katya and Rookie finally met face-to-face, with Katya informing him that Weyland's datapad and the personal shuttle it could summon was their only remaining means of escaping the planet. After Rookie retrieved this item, she escaped with him and the frozen Tequila aboard Weyland's shuttle.

Katya was one of the latest models in Weyland-Yutani's civilian line, featuring enhanced empathic and morality processing.[2] Unlike some synthetics, Katya had no issue with being called an android and fully embraced her status as a machine. Also, unlike the majority of Weyland-Yutani employees and synthetics — both on BG-386 and elsewhere — Katya had little or no interest in the company's reckless pursuit of Xenomorph specimens and instead showed far more concern for preserving human life. This trait brought her into direct conflict with her superior Karl Bishop Weyland, particularly when she contacted the USCM against his orders following the disastrous Xenomorph outbreak at the research facility.

An undamaged model of Katya. 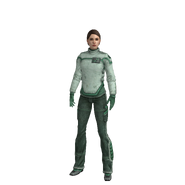 Retrieved from "https://avp.fandom.com/wiki/Katya?oldid=235076"
Community content is available under CC-BY-SA unless otherwise noted.