Katherine Waterston
Katherine Daniels,[3] nicknamed "Danny", was the chief terraformist aboard the colonization spacecraft USCSS Covenant and the wife of its captain, Jake Branson. She was serving on the Covenant during its disastrous voyage to Origae-6, during which it suffered several catastrophes that resulted in the loss of most of the ship's crew and its hijacking by the android David.

Daniels was part of the expedition team that set down on Planet 4 and one of two Covenant crewmembers to survive the incident alongside the ship's pilot Tennessee. However, they were captured by David when he hijacked the Covenant, presumably to be used in his future experimentation.

Katherine Daniels was born on Earth and at some point in her adult life qualified as Chief Terraformist for the USCSS Covenant, a colonization vessel destined for the distant world of Origae-6. While onboard with husband and captain Jake Branson, she was responsible for the supply level and payload of terraforming equipment, and planned to build a log cabin with Branson on Origae-6. Though besieged by terrorists, Daniels and the rest of the crew were able to derail various sabotage attempts, and the ship was able to launch on its mission.

As the Covenant came out of hyperspace to recharge its energy cells in 2104, a solar flare damaged the ship and woke the crew from hypersleep. Branson was incinerated by his malfunctioning cryo-pod, and Daniels was left adrift. After burying Branson's body and mourning him, Daniels set about checking the terraforming equipment with the help of synthetic Walter.

Meanwhile, crewmembers Ankor and Tennessee had intercepted a mysterious transmission issuing from a nearby planet while making repairs to the ship's solar sail. Finding that the world was habitable, and possibly even superior to Origae-6, acting captain Chris Oram proposed traveling there to ascertain its suitability for the colony the crew sought to establish. Daniels objected vehemently to this notion, even making her opposition official to Oram, but he was unmoved. The Covenant was placed on a new heading, much to Daniels' chagrin.

Daniels joined a detachment that traveled to the surface of the mysterious planet aboard Lander One and was the first to notice that, despite an apparent ecosystem being present, there was no sign of living creatures. At the wreck of a crashed alien vessel, Daniels and Walter discovered the effects of Prometheus crewmember Elizabeth Shaw, the apparent sender of the transmission. Through a series of ensuing incidents, security officers Ben Ledward and Tom Hallett were killed by endoparasitic creatures that proceeded to attack the crew, and Lander One was destroyed in the chaos. Daniels and the other survivors of the carnage were approached by a mysterious figure who scattered the creatures and led them to a nearby city strewn with dead bodies.

From bad to worse

Their host revealed himself as David 8, the android from the Prometheus who had accompanied Shaw to this world. Daniels conversed briefly with Oram, who expressed regret for his decision to investigate the planet; shortly after, the captain fell victim to the first Praetomorph, a creature developed by David through experiments derived from Shaw and the Engineers who had built the city. As the situation deteriorated rapidly, David detained Daniels and threatened to subject her to the research he had conducted on Shaw. Daniels fought him off and escaped with the aid of Walter, who dueled David while Daniels and the others fled.

Boarding a cargo lifter commandeered by Tennessee to evacuate the survivors, Daniels confronted the Praetomorph that had hatched from Oram; realizing that weapon fire had no effect on it, Daniels ordered Tennessee to grab and crush the rampaging alien with the lifter's crane.

Showdown on the Covenant

Returning to her quarters on the Covenant, Daniels was alerted by ship's computer MU-TH-UR to the presence of an alien lifeform. Discovering that another Praetomorph had hatched from security leader Dan Lopé, who had been infected while on the planet, Daniels was unable to stop the creature before it killed crewmembers Ricks and Upworth. However, Daniels had a plan. With the help of Walter, she and Tennessee lured the Praetomorph into the Terraforming Bay, where Daniels planned to trap the alien in one of the trucks and eject it into space. Though she succeeded in doing so, a JCB skid-steer broke loose from its moorings among a bank of vehicles and jammed the truck's deployment winch. Daniels ordered Tennessee to launch a second truck to unjam the winch; while the Praetomorph escaped the first truck and attempted to clamber back aboard the Covenant, Daniels baited it into the path of the second truck's fork, which speared the creature and sent it to its death.

With the ship safe and outbound to its original destination, Daniels and Tennessee were placed back into hypersleep by Walter. While discussing her desire to have Walter help her build the log cabin on Origae-6, she realized that David had switched places with her friend, and was powerless to act before she lost consciousness. As the Covenant powered onward, David sent a series of reports to Weyland-Yutani divulging his plans for the ship's complement of colonists and Daniels herself, describing her as "his Queen", a development that would "change everything".

Daniels was an intelligent, astute and resourceful individual, being incredibly proficient in her role as chief terraformist on the Covenant and able to identify the purpose, capacity and value of every piece of equipment in the ship's Terraforming Bay, to which she was heard to refer as "my turf". Daniels was also skilled in cooking up impromptu solutions to emergencies, successfully killing both of the Praetomorphs she encountered on and around Planet 4 using skill and guile few others would be able to apply.

She was also a kind and talkative individual, harboring a friendly relationship with ship's android Walter and some of her human crewmates, Tennessee in particular. She would, however, not pull punches when she felt slighted, such as when acting captain Oram attempted to comfort her over the loss of her husband Branson and stumbled over encouraging her to grieve for him.

On that note, Daniels often showed high emotion when facing events that would be distressing to anyone, namely witnessing the cruel death of her husband and later realizing that mad android David had supplanted Walter while she was slipping into hypersleep, which would likely not have a pleasant outcome for her.

Daniels fighting off a Praetomorph.

Daniels in a promotional poster for the film. 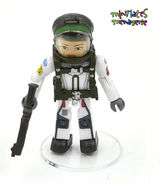 Pop! Vinyl figure of Daniels.
Add a photo to this gallery 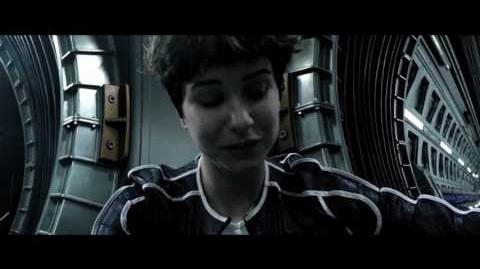 Retrieved from "https://avp.fandom.com/wiki/Katherine_%22Danny%22_Daniels?oldid=260383"
Community content is available under CC-BY-SA unless otherwise noted.