"God help me, that woman needed help. I didn't know what type of parasite she had encountered, but it had planted something inside her. I am so sorry. I had no way of knowing what would happen..."
―Dr. Lingard (from Alien: Isolation)

Doctor K. Lingard[1] was the chief medical officer aboard Sevastopol Station[3] and one of three resident doctors at the San Cristobal Medical Facility, along with Dr. Morley and Dr. Kuhlman. When Catherine Foster was brought aboard the station in 2137, having been attacked by a Facehugger, it was Lingard who tended to her. Once the Xenomorph was born, triggering a devastating infestation on Sevastopol, Lingard became one of the many survivors on the station desperately waiting for rescue.

Although her exact fate is not known, it is highly unlikely she could have escaped Sevastopol before its destruction and it is presumed she perished on the station. Amanda Ripley discovered several archive logs recorded by Lingard while she was on Sevastopol.

"Don't let Kuhlman sweet-talk his way in. The last thing we need is him 'self medicating' with Marshal Waits around."
―Lingard, to Morley (from Alien: Isolation)

Before the Xenomorph outbreak aboard Sevastopol, Dr. Lingard and Dr. Morley became suspicious over the rate at which their colleague Dr. Kuhlman was administering mood stimulants to his patients;[4] they soon learned that Kuhlman was in fact taking the drugs himself, having developed an addiction to them. As a result, they locked Kuhlman out of San Cristobal's dispensary.

"I've just examined a patient with — well, I've never seen anything like it. It's some kind of unknown parasite."
―Lingard to Waits, regarding Foster (from Alien: Isolation)

When the Anesidora arrived at Sevastopol Station and Catherine Foster was brought aboard for medical attention, Lingard was the one to examine her. She quickly discovered the Chestburster growing inside her. Word of the discovery was leaked to Ransome, who subsequently blackmailed Lingard to gain access, threatening to inform Marshal Waits of her dealings in black market medical supplies otherwise.[5] It is possible Lingard may have been preparing an attempt to remove the parasite from Foster when it emerged, as Amanda Ripley later found Foster's corpse in the operating theater of the San Cristobal Medical Facility.

Following the horrific incident, Foster recorded an video log expressing her guilt, seemingly under the impression her attempted surgery may have somehow provoked the creature's violent "birth". With San Cristobal sealed off and quarantined by the Marshals, Lingard set up a temporary medical station outside the hospital.[6]

Over the next few days, as the now grown Xenomorph no doubt began abducting and killing people on Sevastopol, Lingard aided Morley and the other medical staff in evacuating as many patients as possible from Sevastopol before Waits sealed the area off.[7] Eventually, Lingard moved to the Josiah Sigg Executive Apartments in the Solomons Habitation Tower, where she set up a field hospital to treat the increasing number of wounded coming in from across the station, aided by most of the remaining medical staff.[8][9] The treatment center soon became a survivor camp, the occupants desperately hoping to hold out against the escalating Xenomorph infestation until they could be rescued. However, medical supplies soon began to dwindle, forcing Lingard to venture back to San Cristobal and try and find medical supplies.[9]

Despite encountering a Xenomorph in San Cristobal, Lingard managed to recover the necessary supplies and escape the area. Hoping to avoid further contact with the hostile creature, Lingard opted to return to her camp via an alternative route, sticking mainly to ventilation shafts to stay out of sight. She discovered the vents were infested with Facehuggers, but had fortunately recovered a flamethrower from some deceased Sevastopol inhabitants that she used to kill the creatures.[9]

Lingard eventually made it back to her camp, only to discover that carnage had preceded her — as a result of Special Order 939, APOLLO had unleashed its Working Joes on the remaining survivors on Sevastopol, considering anyone on the station a potential threat to the Xenomorphs. Several synthetics had broken into the camp in the Josiah Sigg apartments, slaughtering everyone within and leaving Lingard as the sole survivor. Despite several of the hostile androids still patrolling the area, Lingard recovered as much information as she could about the individuals that had been in the camp before fleeing the area in an elevator, locking the area down before she left in order to seal the androids inside.[9]

Her exact fate after this is unknown, although it seems unlikely she escaped Sevastopol and she is presumed to have died aboard the station.

"I've broken the rules, but I've always known what's the right thing to do. Until now."
―Lingard (from Trauma)

Lingard was a selfless medical practitioner who always prioritized treating her patients above anything else, as is evident from the harm she placed herself trying to recover supplies for the wounded in her camp. Even her dealings in the black market trade on Sevastopol can likely be explained by her simply attempting to acquire much-needed medicine for the patients in San Cristobal.

A sketch of Lingard by Mike Tanaka. 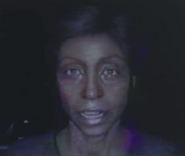 Lingard as she appears in her recorded report on the death of Foster.
Add a photo to this gallery

Retrieved from "https://avp.fandom.com/wiki/K._Lingard?oldid=247037"
Community content is available under CC-BY-SA unless otherwise noted.