The Juggernaut was a Juggernaut-class Engineer spacecraft found on LV-223 and used by the Last Engineer. The ship was destroyed after the USCSS Prometheus collided with it in 2094, although it remained mostly intact. A second vessel of similar design was used by Elizabeth Shaw and David 8 to fly to the Engineer homeworld, and this craft was later be found by the crew of the USCSS Covenant.

The Juggernaut's bridge equivalent consisted of 4 Sarcophagi, a control mechanism made out of some sort of biological-like material, which is activated through the use of an Engineer flute and the pilot's seat on the center of the bridge.

Ships with the same design as the Juggernaut seem to be the primary ship used by the Engineers for interstellar travel or at the very least, the most common one used for transportation for cargo as the interior of the ship is filled with many large pockets of spaces seeing as at least one of the vessels on LV-223 contained thousand of Steatite Ampules which contained Chemical A0-3959X.91 – 15 and the derelict ship on LV-426 contained thousands of Xenomorph Eggs. 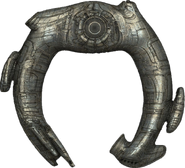 Retrieved from "https://avp.fandom.com/wiki/Juggernaut_(Prometheus)?oldid=241693"
Community content is available under CC-BY-SA unless otherwise noted.